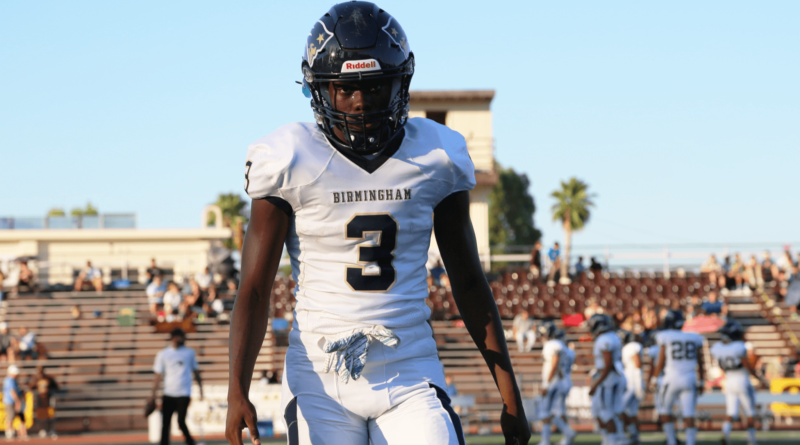 San Pedro squeaked by Carson 13-7 on the road in the last game of the regular season for both teams. Each squad has had two weeks to prepare for the rematch at San Pedro.

The Pirates are the one seed and have running back/linebacker Josh Ward on their team, the favorite for the City Section player of the year award. It’s illogical to pick against San Pedro after their 9-1 regular season and win over Carson earlier this month, but it’s always tricky to play a league opponent in the playoffs. This one will be close.

No. 5 Garfield vs. No. 4 Birmingham (Open Division)

Birmingham has done a nice job of balancing their offense with the run and the pass this season. Senior running back Jonino Liangco had his best game of the year two weeks ago in Birmingham’s league-clinching win over Granada Hills. He averaged 7.5 yards per carry in the victory.

The Jackson Dadich to Arlis Boardingham connection in the Patriot passing game has resulted in nine touchdowns on the year. That balance could give Garfield some trouble.

The Bulldogs have had a strong rushing attack all season with senior PJ Garcia. It’s been the passing game that has been inconsistent. If Birmingham gets up early and Garfield has to rely more on the pass, will they be able to stay in the game? That’s what I’ll be looking to see. Senior receivers Thomas Serrano and Khyren Ross will be x-factors.

Has San Fernando truly been tested this season? They’ve beaten Canoga Park and Reseda, but did not face off against an Open Division City team in the regular season. Crenshaw went toe to toe with Garfield, losing on a last second field goal. The Cougars believe they can beat anyone in the Open Division field.

San Fernando running back and linebacker Bradley Pierce is having a fantastic senior season for the Tigers and should will San Fernando to a win at home on Friday, but Crenshaw certainly has a chance. We’ll know a lot more about San Fernando and whether they’re true title contenders after this game.

I picked Palisades to win last week and I’m going to stick with that prediction. The Dolphins are deep and can attack teams offensively in multiple ways. Junior quarterback Forrest Brock has built a nice rapport with receivers Noah Ghodooshim and Teddy Suisman this season. Running backs Max Palees and Kenny Cline make up one of the best rushing duos in the City.

It’s easier said than done, but stopping Banning’s rushing attack is how teams have beaten the Pilots this year. Banning quarterback Jake Otto and running back Jakob Galloway are great in space and have given opposing teams fits all season. Limiting those two will be the Palisades defense’s primary goal.

Grant beat No. 5 Fairfax last week 38-34. Senior running back Michael Smith rushed for 167 yards and two touchdowns in the win. He also returned a kickoff 80 yards for a score.

This week Grant goes up against El Camino Real, a team that has been dealing with injuries at the quarterback position. The Lancers have another great shot at an upset.

Reseda showed it can stop the double wing in its 36-6 win over Cleveland earlier this season. Roosevelt runs that same offense and beat Cleveland in round one 21-19. Reseda knows what’s coming.

The Regents need to make sure they don’t shoot themselves in the foot with penalties. Roosevelt has a solid defense and the Roughrider offense is capable of turning Reseda penalties into points. The Regents have taken a few too many 15-yard fouls for head coach Alonso Arreola’s liking in 2019, but for the most part it hasn’t cost them. If Reseda plays a clean game, they’ll win.