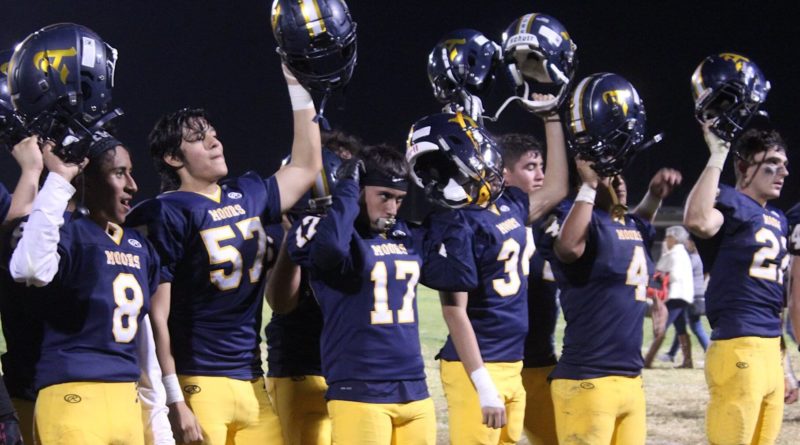 Looking only at wins and losses, Fillmore would be the favorite in this fairly evenly matched quarterfinal, but that doesn’t tell the whole story. Fillmore has been very consistent this season, with every game coming as a blowout victory, except they opened up league play with a surprising 35-6 loss against Nordhoff.

Esperanza is 7-4, but three of their losses were to Foothill, Katella, and Brea-Olinda. They wrapped up the regular season by getting upset 15-13 against El Dorado, but bounced back big last week against Rancho Alamitos. The Aztecs also have impressive wins against decent teams like Beckman and El Modena.

Esperanza will almost certainly win this game if they bring something close to their A-game. Otherwise, the odds are Fillmore gives them a serious run for their money.

Behind Inglewood, Alhambra might the favorite to win the title, although the gap is significant. At 11-0, they’ve almost never come even somewhat close to losing this season, although their strength of schedule leaves room for doubt. They have a balanced offense led by sophomore QB Noah Rodriguez, and very few foes have been able to score much on them this year.

Calvary Chapel has been great this year at 9-2 and certainly has a shot, but it would take a lot for the Eagles to pull this one off. Their strength of schedule has also been middling at best, but they’ve taken care of business against every team at their level besides a surprisingly lopsided loss to Santa Ana a few weeks ago. They’re very heavy underdogs, but could easily pull off the upset if Alhambra doesn’t come ready to play.

Cantwell-Sacred Heart was the underdog last week against Rim of the World, so they should be comfortable against a team in that same ballpark in Ramona. As for the Rams, it was surprisingly difficult for them to pull away from Rosemead last week, so that should give the Cardinals a reason to believe. Ramona probably wins this game seven or eight times out of ten, but those odds aren’t bad for Cantwell Sacred-Heart to make the semis when most people gave them almost no chance to win a playoff game.

Not only is Inglewood the favorite to run away with Division 13, but the Sentinels could be serious competitors for the quarterfinals manydivisions upwards. At 11-0, they’re led by QB Jared Heywood, who statistically (factoring out strength of schedule) is having one of the most dominant seasons passing the ball in Southern Section history–3,790 yards, 54 touchdowns to six interceptions, and an unthinkable 78.9% completion. Inglewood is also giving up less than six points per game, so, uh, good luck.

There’s no reason on paper to think SaMo has a shot, but they’re having a strong season at 7-4 and can at least say that they’ve seen two teams who are significantly better than Inglewood in Culver City and Lawndale. They’re certainly good enough to where Inglewood can’t sleepwalk to a win.