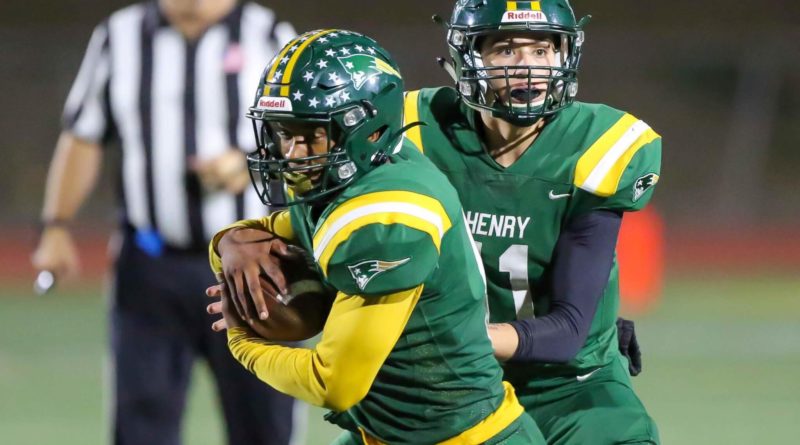 Here’s a look at the Top 5 quarterfinal games to watch.

No. 2 Cathedral Catholic vs. No. 3 Carlsbad

The Dons and Lancers will open the playoffs against each other for the third consecutive postseason. Last season’s open division semi-final game was dominated by the Dons, 35-0. That game is sure to be on the mind of the returning Carlsbad players who come in having won seven games in a row including an undefeated run through the Avocado League. In his first season as the Lancers starting quarterback, Aidan Sayin has been very efficient. The junior signal caller is averaging nearly 200 yards per game and has thrown for twenty touchdowns, connecting with nine different receivers. Carlsbad linebackers Kyle Vassau and Dylan Quinn are having great seasons and have combined for 14.5 sacks heading into the semi-final round. Cathedral’s star running back Zavien Watson has been a workhorse all season and is certainly eager to bounce back following the Dons surprising loss to Lincoln in which he lost two fumbles.

A rematch of week nine’s battle in which the Grizzlies scored a late 4th quarter touchdown to secure a 14-10 win over the Mavericks. This will be the fourth battle between the two teams since week nine of the 2018 season. Mission Hills as the nine-seed traveled to La Costa Canyon and shutout the top-seeded Mavericks, 14-0, in the division one playoffs last season. Both teams have relied heavily on their defenses as they worked through league play. La Costa Canyon lost Princeton-bound linebacker Ozzie Nicholas to a knee injury earlier in the season but have been able to rebound and find themselves with a solid opportunity to keep advancing in the playoffs.

The Cougars and Pirates last matched up in the 2004 playoffs, a game won by Oceanside 34-10. Steele Canyon remained perfect during the regular season until a slip up in the 2nd half against Helix that cost them a league championship. The Cougars have had a week to regroup and ready themselves for a division one playoff run where they appear to be the favorites. Oceanside also dropped their regular season finale, against rival El Camino, that cost them a home playoff game. The Pirates recorded a shutout against Eastlake in round one, capped off by a late touchdown run by Kavika Tua to secure the 10-0 victory. Tua is up to 2,079 all-purpose yards on the season and has cemented his spot as one of San Diego’s top junior football players.

The Cavers and Spartans matched up in the 2017 semi-finals, a game won by San Diego, 26-22. Several Spartans played a key role in that game and now return as seniors sure to have that still in their memory. Deniro Osuna continues to put up great numbers in his third season as the Central quarterback. Running back Angel Nava-Esparza has run for 12 touchdowns this season despite only carrying the ball 73 times. In Central’s 1st round victory over Mt. Carmel the Spartans allowed 607 total yards, including 537 through the air, but were able to hang on and advance. Central will see a completely different approach this week against the Cavers who are running the ball eighty percent of the time on offense this season. Mo Jackson leads the rushing attack but freshman Amare Ary and sophomore Michael Savage have also been big contributors.

It’s been since the 1995 quarterfinals that Orange Glen and Patrick Henry last played. The two teams, who both go by the Patriots, will meet up again this week in the division four quarterfinals. Patrick Henry survived a tough battle in the first round against Del Norte coming up with a last-minute victory, 35-28. Their offense was explosive as usual with Kai Jessie and Elijah Lux each posting big nights. Their defense will need to be ready for Orange Glen’s Cael Patterson who has burst onto the scene putting up huge numbers over the last two seasons. So far this year he has 2,669 total yards and 33 touchdowns. Orange Glen will look find a way to get him the ball early and often and hope to control possession against Patrick Henry’s quick strike offense.