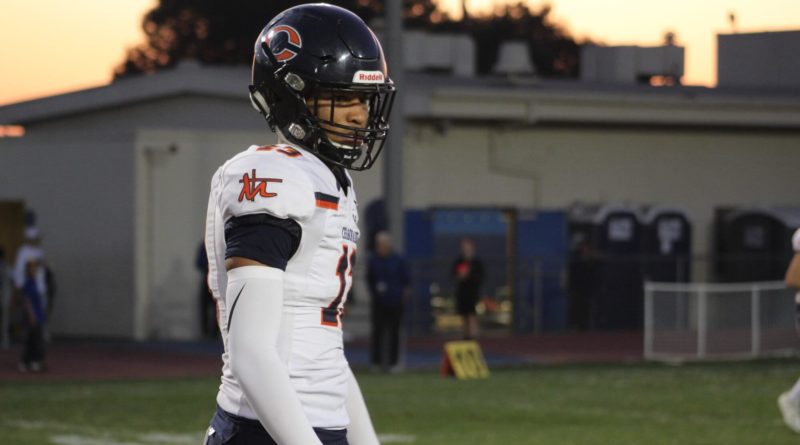 The quarterfinal round of the football playoffs in both the LA City and Southern Section begin on Friday. To avoid doubling down on my Southern Section Division 1 and LA City Open Division upset picks, I predicted that Mission Viejo would have a tough time with Servite, San Pedro would struggle with Carson and Banning would get an upset bid from Palisades. You can read more about those matchups here.

So who else should be on upset alert on Friday? Below are seven “underdogs” that will put up a fight.

I hope I don’t look like an Upland hater by including Chaminade on this list. I picked against Upland last week and they beat Oaks Christian by 10, a team that beat Chaminade earlier in the year.

Chaminade is giving off “team of destiny” vibes to me. They beat Norco on the road last week 46-44. Willy Camacho ran for five touchdowns and caught a sixth in the game to give the Eagles their third win in a row. Things are clicking for Ed Croson’s team.

Last Friday’s win for Chaminade was a shootout. This week, I think whoever can get to 20 points will win. Upland has to come to Chaminade, but they have one of the top defenses in the region led by star linebacker Justin Flowe. Friday’s game will be a physical dogfight, but it’s a game that I think is a pick ’em.

St. Pius X-St. Matthias Academy is undefeated and the top team in the Division 14 playoffs. They’ve beaten playoff teams in better divisions like St. Anthony and St. Bernard’s already this season. They have a great shot to win Division 14.

Friday’s matchup at Ganesha will be tough however. Led by star sophomore quarterback Jesse Carmona, Ganesha has put up over 60 points three times in 2019. They can flat out score. Their high-powered offense gives them a chance on Friday.

No. 12 Grant beat No. 5 Fairfax last week 38-34. Senior running back Michael Smith rushed for 167 yards and two touchdowns in the win. He also returned a kickoff 80 yards for a score.

This week Grant goes up against No. 4 El Camino Real, a team that has been dealing with injuries at the quarterback position. Grant has another great shot at an upset.

Monrovia quarterback Nick Hernandez is having a fantastic senior season. He was surgical in the Wildcats 41-0 first round playoff win over Santa Fe, completing 19 of 21 passes for 256 yards and a touchdown.

Monrovia has only lost one game all year and even though they’re on the road against Newport Harbor this week, one of the top teams in Division 9, I like their chances.

Rancho Verde is on the verge of a truly special season. The Mustangs beat Serra in overtime last week and Norco earlier in the year. This week they take on a very talented San Clemente team on the road. Similar to Upland vs. Chaminade, I think this game could go either way.

Rancho Verde quarterback AJ Duffy has completed 71% of his passes in his sophomore season. He’s thrown for 2,494 yards and 26 touchdowns. Duffy will be key in the Mustangs’ upset bid.

San Dimas is 10-1 and their quarterfinal opponent Foothill, the top overall team in Division 9, is 11-0. Friday’s game will be a battle between two teams who haven’t dealt much (or at all in Foothill’s case) with defeat in 2019.

Nick Cuda is the name to know on the San Dimas roster. The senior rushed for 220 yards and two touchdowns in the Saints’ 49-20 first round playoff win over La Salle. If Foothill lets him get loose, they’re at risk of losing their first game of the year. San Dimas is the home team on Friday, which gives them an added edge.

San Jacinto will host Kaiser, one of the top teams in Division 6, on Friday. I think this game will come down to the quarterback play of Kaiser’s Trey Tribble and San Jacinto’s Kajiya Hollawayne.

Tribble has led Kaiser to an undefeated season so far. He’s a run first quarterback that has been extremely effective for the Cats this year. Tribble has rushed for 1,196 yards and 14 touchdowns in 2019. If San Jacinto can score early with Hollawayne leading the charge, Kaiser may look to throw more, which could get them out of their rhythm. That will be San Jacinto’s recipe for success.