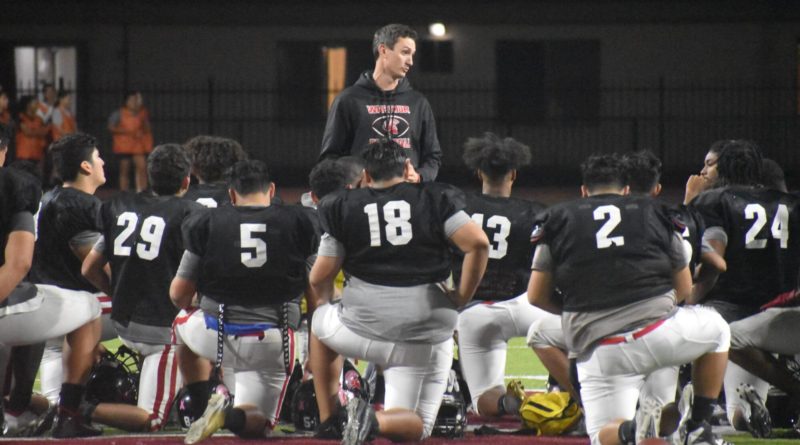 DOWNEY – When the football program was re-launched in 2017 after decades without ball at St. Pius X-St. Matthias Academy — also known as PMA (Pius-Matthias Academy) — they had to start from scratch. The athletic program put itself out there and took applications for coaching positions, and pieced together a coaching staff from the applicants, many of whom didn’t know each other.

PMA, a Catholic school in Downey, selected Todd Butler and Devah Thomas (known as Coach Dee or the Young Guru to those who know him in the football community) as their head and assistant head coaches, respectively, and gave them the support they needed to get their reborn program up and running. Starting from the ground up and featuring a lot of athletes who had never even played football before, the Warriors went 3-7 in the first season — not bad at all considering the circumstances — and 4-6 last year, which resulted in a playoff appearance.

Today, even with fewer than 30 players on the team, they are 10-0 on the season. Division 14’s top-seeded Warriors completed a 9-0 regular season and won their first league title as a new program. Last week they defeated Santiago (Garden Grove) 41-10 last week to record their first playoff win. They will also be heavily favored this week against Ganesha to continue the perfect season.

A win would most likely set up a semifinal against a strong Vista Del Lago squad, against whom PMA would be considered a mild favorite. The odds are strong that a win there would put them up against Sierra Vista in the finals, which, along with PMA, is one of the strongest teams in recent Division 14 memory. Next year, both teams will likely jump up one or more divisions and still have great chances at going on playoff runs in Division 13 or higher.

“We had a lot of guys who had never played football before,” Coach Dee says of 2017. He’s also the offensive coordinator.

“It was kind of like coaching a junior peewee team. At the same time, we were building men, building character, building confidence–we had maybe five guys on the team who had been hit before playing football. Everyone else had either never played football or had played flag but never been hit.”

PMA had one dominant player that year, defensive end Leonard Payne Jr., who got a full scholarship to Fresno State in the program’s first year of existence.

“That was kind of the turning point, when we were like, ‘Okay, we’re getting something here.’ We took a lot of lumps, but we got something out of that year, getting a guy signed to Division 1.”

The Warriors went 2-2 in league last season and finished second. This year, the jump as a program wasn’t a forgone conclusion by any stretch, but the coaches aren’t shocked that they took another jump as a program. It was the result of both growth and continuity as a young program, and also the result of a committed group of players who are setting the tone for the program’s culture now and for years to come.

“This is a special group to me, these 25 or 26 guys that come in ready to grind week in and week out,” says Coach Dee. “They have each other’s backs, and they’re a blessing to get to coach.”

He credits their new capacity for year-round training as a major reason for the jump. Now, there are no holds barred.

“We finally got a whole full year of an offseason program. At first, the field was getting done, and we didn’t know what guys were coming out in spring or summer. And last year, we didn’t have a field, so we were practicing at the baseball field and the park. The weight room was being redone for a very long time, so we couldn’t even lift weights. But this year, having a full spring and summer was a big difference.”

While the expectations and belief were higher coming into this season, there were a few certain comeback victories against strong teams such as South (Torrance) and Trinity Classical Academy that really solidified this team’s confidence that they were already taking the next steps they’d been working for as a program.

“These guys showed that they had that tenacity and determination in those games. The last couple years, they were the ones getting hit, but now it’s their time to be the ones doing the hitting…we overachieved this season, going 9-0. Nobody saw it coming, us going undefeated. Now people have started talking about Pius football.”

When PMA heard that they were playing Santiago in round one, the coaches hurried to school and watched about seven hours of film on them. To most observers, PMA’s top seed in Division 14 was never in doubt, and many consider them a shoe-in for the finals, but both the coaches and players at PMA make a point of taking every opponent seriously and taking everything one game at a time.

Several Warriors are getting college attention, NCAA Division 1 included, such as Brenden Hodge, Domingo Ladson, and Bruce Walker, all of whom fall under the ATH position and do a variety of things on the football field.

For Coach Dee, who’s also the college and media coordinator, the biggest goal is to get players into colleges. He’s actively in communication with college coaches from in and out of state, keeping them up to date and stocked with film on PMA’s college prospects.

“For me, that’s my main thing, sending these kids to school and changing the dynamics of their families,” said Coach Dee. “Many of them are from Compton, Watts, South Central LA. They just want an opportunity, and want to be safe. They’re ready to work hard and create something new for their families.”

The other biggest focus for the program is to “build men” with high character.

“We want them to learn life lessons, like accountability and [handling] adversity,” said Coach Dee. “Poise and class. Since they’ve started, we’ve seen more accountability, dedication, mental toughness. We don’t jaw with the other team, we don’t throw a punch just because they throw a punch. We teach them to be tough and be gentlemen at the same time.”