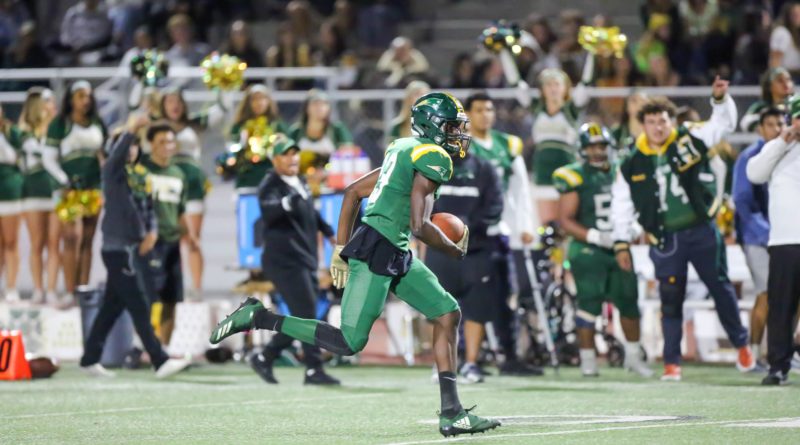 In the first round of the playoffs several teams that just missed out on hosting a playoff game went on the road and took out their frustrations on their higher seeded opponents. In division one, nine-seed Oceanside went to Eastlake and took out the Titans, 10-0. The ten-seed in that division, Torrey Pines, went on the road to Rancho Bernardo and dominated the Broncos, 34-6. The Poway Titans, the 11-seed in division two, continued that theme. They shut out Monte Vista, 47-0. In division three, nine-seed West Hills took down Valhalla after losing to the Norsemen during the regular season. Coronado kept up the trend in division four taking down Mt. Miguel with a late defensive stop to grab what may have been the most impressive first round win.

La Jolla Country Day has put up huge offensive numbers all season and that continued in their 1st round win over Tri-City Christian. Senior quarterback EJ Kreutzmann was 21 of 26 for 428 yards and six passing touchdowns. Senior wide receivers Nicholas Albert and Brandon Kim each caught three touchdowns.

Crawford shutout Maranatha Christian in the 1st round thanks to a big performance from junior Abel Villasenor. He had four tackles, two sacks, two forced fumbles and also returned punts for the Colts.

Despite being the lower seed, Poway traveled to Monte Vista and shutout the Monarchs 47-0 in the 1st round of the division two playoffs. Seniors Colby Kopacz and DJ Owens each had big games. Kopacz had eight carries for 66 yards and a touchdown. He also had four tackles, two sacks, and blocked two punts. Owens grabbed two interceptions and also had a reception for twelve yards.

Despite having their season end at the hands of Central, Mt. Carmel put up a fight as the twelve seed in division three. Junior quarterback Carson Taumoepeau was 28 of 48 for 537 yards and threw for four touchdowns. Receivers Jake Ventimiglia, Amir Adams, and Jayden Virgin each had 100 yards or more receiving.

Top Games in Week 2 of Playoffs