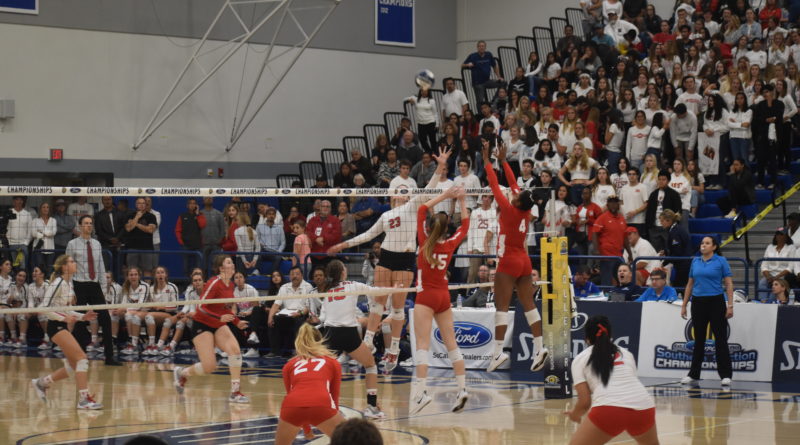 NORWALK– Mater Dei gave it everything they had Saturday night at Cerritos College, but Redondo Union was just too good. Despite numerous prolonged comeback efforts by Mater Dei, the Sea Hawks wrapped up their first division title since 2014 in four sets, with two of their winning sets coming by more than five points.

In a battle of two of the very best teams in the country, Redondo Union won the first two sets 25-19 and 25-16. Mater Dei made them work for everything, but the score shows that those first sets weren’t particularly close.

The atmosphere was electric. All of Mater Dei’s contingent was on one side in white, and Redondo Union’s on the other wearing red, as both teams’ colors are red and white. The Monarchs were extremely well supported, although the loud and aggressive tone set by the Sea Hawks’ large and raucous student section was hard to match.

Mater Dei got it going in the third set, jumping out to 6-2 and 10-4 leads. Redondo Union battled back and cut the lead to 12-9, but Mater Dei took four straight points after that and decisively won the set 25-16.

The fourth and final set was the closest set of the night, the only one that that really came down to the wire. Redondo hopped out to a 4-0 lead, and the squads traded the next 14 points which gave the Sea Hawks an 11-7 edge that quickly became 17-11. Then Mater Dei went on a run and cut it to 19-16, putting them firmly back into the match.

Every time Redondo would score, the Monarchs would fight back. There were very few unforced errors per usual between these teams, including when the game hung in the balance for Mater Dei, and an absurd amount of brutally difficult digs made to look easy. 21-17 became 22-20, and Redondo Union took a time out. They quickly regained the tiny bit of composure they had lost, and put it away 25-21 before it became even closer.

Redondo Union spent a lot of time defending from rally to rally, which they seemed to be perfectly comfortable with. Including stretches where they were at their most dominant, the Sea Hawks had no problem letting Mater Dei give it to them above the net, because they seemed to be so incredibly confidant in their ability to dig out the hardest of slams and keep it moving.

It worked out for them all night long outside of the third set. With just a touch less aerial capacity than Mater Dei, particularly from a striking perspective, being patient and picking their spots seemed to be exactly their strong suit–especially because they could eventually load up on incoming strikes and score on blocks, and because when it was time to go on the attack, they went for kills with high accuracy.

For Redondo, freshman Mele Corral-Blegojavich was one of the best players in the game, finishing with both a team-high 15 kills and a lot of work keeping alive hard hit balls from Mater Dei, both digging and blocking. Jody Smith also had 15 kills and numerous key blocks. Kami Miner’s 44 assists was by far the most in the game, and Nalani Iosia was outstanding at libero. Maya Harvey also had a solid night doing a little bit of everything.

Mater Dei was led by most of the usual suspects. Mia Tuaniga led the Monarchs with 29 assists and a lot of hard work around the net. Zariah Henderson and Meg Brown led Mater Dei with 12 and nine kills, respectively. Jordan Schilling was also steady across the board.

As big as the emotions were for both teams after the game, the floodgates were far from open because both of these teams are candidates to win the state championship. Mater Dei knows that this could just be a hurdle in the road, and Redondo Union knows that their work is unfinished. The idea of these teams meeting again with even higher stakes make it all the more exciting.