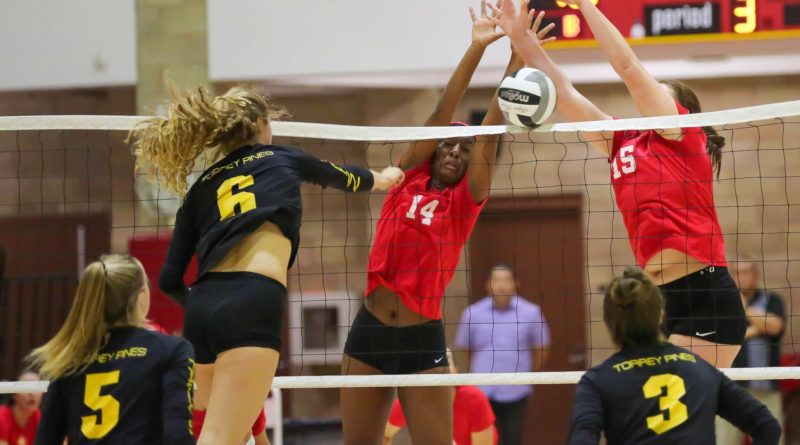 CARMEL VALLEY – The roster changes each season, but the dominance of the Torrey Pines Volleyball program continues. The Falcons swept host Cathedral Catholic on Saturday night to grab their sixth open division title in seven years.

“I think Brennan Dean has been the biggest part of it. He’s one of the most supportive and one of the most amazing coaches I’ve ever worked with.” senior Delaynie Maple said after the game.

“He always believes in every single player; he believes that all nineteen of us have a huge role on this team.”

Torrey Pines defeated Cathedral Catholic in the open division Championship game last season and had beaten the Dons twice already this season but entered the match not assuming that a win was a foregone conclusion.

“I think we just came into this game knowing that the sentence we have written on the backs of our shirts is that ‘we’re entitled for nothing and we’re grateful for everything’ and so I think this game is a perfect example of that,” said Maple who’s headed to play beach volleyball at USC next season.

The Falcons cruised relatively easily in the first set winning 25-19. After jumping out to a 6-0 lead in the 2nd set, the Dons worked their way back to grab the lead at 12-11. Torrey Pines regrouped and went on to win 25-23 giving them a two-set lead.

Cathedral Catholic picked up their play in the 3rd set leading throughout. They held a 24-21 lead before Torrey Pines flipped the momentum and executed on five consecutive points to seize the championship.

“I think we just never gave up on each other,” Maple said. “Even though they had the lead and started to get a few points at the end we all believed in each other, we just knew it would be that much cooler to come back.”

Here are photos from the match:

(All photos by Josh DaFoe Photography)