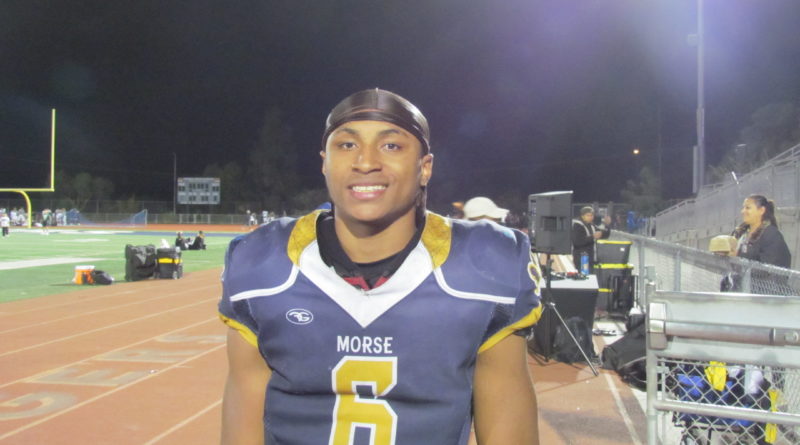 SAN DIEGO – Morse running backs Jaycob Hicks and Francisco Martinez combined for four rushing touchdowns in the Tigers 24-7 first round playoff victory over Mira Mesa Friday night. Morse will travel to Santa Fe Christian for round two next Friday. Below are five takeaways from the Tigers’ win.

Morse converted two 4th downs on their opening drive that was capped off by a Jaycob Hicks touchdown run. After forcing a three-and-out, Morse drove back down and scored as the first quarter expired, this time on a Francisco Martinez 25-yard touchdown run.

Morse got the ball back after forcing another 3-and-out and scored once again when Francisco Martinez took the snap and snuck right up the middle unnoticed for a 24-yard touchdown run.

Martinez and Hicks each ran for two touchdowns on the night.

Morse doesn’t rely on much of a passing game, but freshman Johnny Mosti was pressed into action and came up big with several passes that resulted in first downs and kept drives going.

“I had seen a post on social media this week that had me feeling some type of way.”

That’s what junior running back Jaycob Hicks said after the game when asked about the revenge factor in this week’s game.

Mira Mesa received the 2nd half kickoff but managed only one first down before punting the ball back to Morse. Jaycob Hicks responded by taking the snap and finding a hole outside for a 43-yard touchdown run that gave Morse an insurmountable lead considering how their defense was playing.

Just two weeks ago these two teams squared off in an Eastern League battle that was won by Mira Mesa 28-6. Friday’s game could not have been more different as the Tigers were able to set the tone early with their power rushing attack.

Morse Head Coach Tracy McNair was quick to point out what he thought was a big difference from the previous game.

Throughout the game Morse shifted several linemen just prior to the snap to overload one side of the ball, which tested Mira Mesa’s discipline. The Marauders fell for it the first two times that Morse attempted it, including once on a 4th down play that drew an encroachment and extended the Tigers drive.

“Just to draw them offsides,” Francisco Martinez said. “If we all shift, we could get (Faavae Leomiti) to shift to the other side.”

Mira Mesa had struggled on offense throughout the year but had seemingly turned it around by winning two of three games to finish out the regular season.

The Tigers set the tone early on defense forcing the Marauders into consecutive three-and-outs to begin their night.

“Tonight, we were more focused, we were on task, came up with a plan and locked in at practice,” said junior defensive back Elijah Greene who grabbed an interception late in the 3rd quarter.

Mira Mesa only managed three first downs in the 1st half, all of them coming on consecutive pass interference calls on a drive that ended in a turnover on downs.