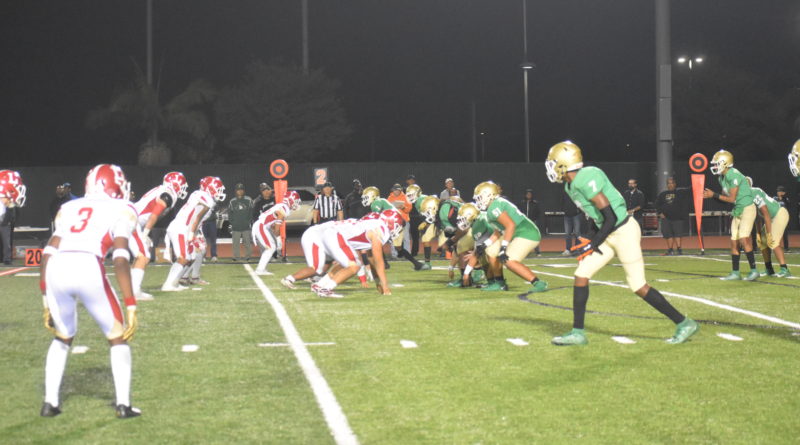 LONG BEACH– Despite the cool ocean breeze coming in intermittently at Veterans Memorial Stadium, Long Beach Poly’s 27-24 playoff victory over Orange Lutheran was filled with late-game fireworks. While the Jackrabbits never trailed by a significant margin in the second half, their victory came down to the wire numerous times and was nothing short of miraculous. Here is the recap and five takeaways from the game.

Long Beach Poly trailed numerous times in the game. Two rushing touchdowns by Lancers RB Cooper Vander Hill in the first half got Orange Lutheran out to a quick 14-0 lead with significant momentum. Then Amajay Gravelly took home a pick-six from about halfway across the field for one of the top plays of the year in the Southern Section to bring the Jackrabbits back. After that, it was 14-7 with 6:05 left in the second quarter.

With about three minutes left in the game, Long Beach Poly got the ball less than ten yards out from their own end zone down 21-13. Orange Lutheran nearly stopped them numerous times, and probably would have once or twice on that drive if not for unsportsmanlike conduct and roughing the passer penalties. The Lancers’ defense wasn’t conceding much at all, and Poly QB Mehki Jordan had to lead a nail-biting drive down to the red zone fueled by his best stretch of passing in the game, a few nice keepers, and those couple of crippling penalties by OLu.

At one point early in the drive, the Jackrabbits had to go for it on a fourth-and-five in which they had no momentum, and Jordan found Anthony Curtis near the sideline for roughly ten yards. Without the clutch completion, the game would have been over.

Eventually, the Jackrabbits made it to the red zone, and Aupiu Moe broke through for a touchdown with 41 seconds left to cut the lead to two. Jordan followed it up with a conversion on a keeper in which he drove dramatically into the end zone pigskin first, and cleared it by no more than half a foot.

Poly would also give up a field goal to Orange Lutheran to start overtime and trail 24-21 before Jordan ended the game with his second rushing touchdown of the night.

While his passing game had some cold stretches during the game, Mehki Jordan took over down the stretch for Long Beach Poly. And when the game was on the line, he was flawless with both his decision-making and his execution, including a handful of short bullet passes on the money in their scoring drives. He finished with 145 passing yards on 13 of 23 completions, many of which came in the fourth quarter when it was needed most, and also had 118 rushing yards with two rushing touchdowns, plus the two-point conversion.

The Jackrabbits offensive line was outstanding for the last 2.5 quarters of the game in particular. Jordan had a quick touchdown drive on two big runs late in the first half when nothing was going offensively for Long Beach Poly, and that’s when their offense started rolling. The offensive line was one of the driving forces behind it. After allowing two quick touchdowns in the first quarter, their entire defense was stellar all game.

LB Aupiu Moe had an excellent night defensively for the most part, including an emphatic sack and a few big tackles for loss. He also was the battering ram the Jackrabbits needed with 41 seconds left to break through into the end zone and get within two. Gravelly led the charge for a very strong Poly secondary, and James Maae was, as usual, a beast on both lines and almost never taking a snap off. Bryun Parham was dominant with a dozen tackles. Once their front seven clamped down late in the first quarter, they were close to flawless defensively.

Cooper Vander Hill did everything he possibly could to carry Orange Lutheran offensively as he’s been doing for a long time. He finished with three rushing touchdowns and over 200 rushing yards. Vander Hill is far from the biggest running back, and was resilient when getting smashed brutally on many of his 33 carries by Poly’s large, hard-hitting front seven. Nick Gallegos reeled in a number of tough receptions at WR.

Corners RJ Regan and Demaje Yancey led a strong effort by OLu’s secondary. Their front seven was strong for much of the night, but at times struggled with Poly’s excellent offensive line. Penalties at the worst possible times really did cripple the Lancers in the end more than overall lapses in defense.

Jordan’s second rushing touchdown of the night, down three in overtime against a gassed OLu defense, won the game for Poly. Down three, failure to score on that drive would’ve lost them the game.

BATTLE ON THE GROUND

While both teams did finish with over 100 passing yards, this game, as expected, featured two teams that love to run. Vander Hill did all he could on a day when Orange Lutheran’s passing game was struggling. No matter how many times he got smashed because the run was obviously coming, he just kept giving it everything he had.

Mehki Jordan is one of the better running QBs in SoCal, which is a focal point of Poly’s offense. He wasn’t having a great night passing the ball until the fourth quarter, at which point the floor really opened up for him as a runner, but he was carrying the Jackrabbits with his legs even before their passing game caught fire down the stretch.

Orange Lutheran, a roster filled with standout seniors, was absolutely devastated to see their season end like this. Even after a feisty game, many Jackrabbits were seen consoling their crestfallen counterparts while temporarily holding off the celebration after the game. Even in the midst of pandemonium, it was great to see Poly players visibly invested in picking up their crushed opponents.