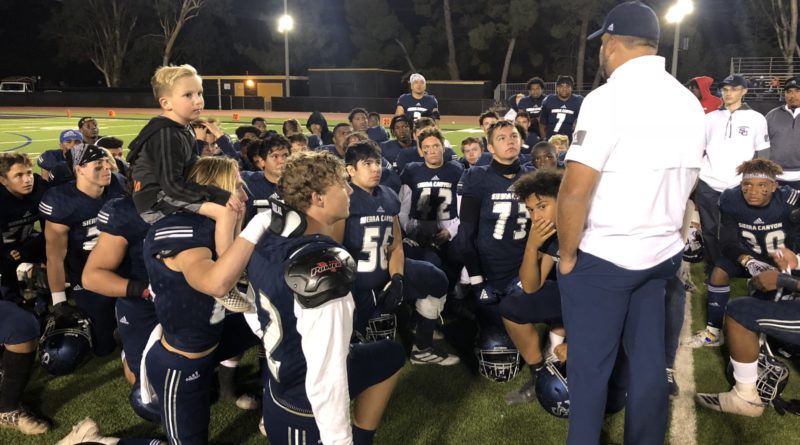 CALABASAS — Sierra Canyon quarterback Chayden Peery completed 20 of 29 passes for 338 yards and three touchdowns in the Trailblazers 35-21 first round playoff win over Santa Margarita Friday night. Sierra Canyon will host Vista Murrieta in the quarterfinals next Friday. Below are five takeaways from the Trailblazers’ round one win.

Peery hit junior receiver Donovan Williams on a slant that went for a 67-yard touchdown just one minute and one second into the game on Friday. Santa Margarita scored two touchdowns following Sierra Canyon’s opening score, but from there it was all Sierra Canyon.

The Trailblazers tied the game at 14 in the second quarter. Peery darted a pass to senior receiver JD Sumlin for a 25-yard touchdown on a 3rd and 15. A minute later, senior Brendon Gamble bulldozed over two Santa Margarita defenders for a 35-yard touchdown run. The Trailblazers executed their two minute offense perfectly on that possession to take a 21-14 lead into the locker room at halftime.

In the third quarter, Peery threw his second touchdown pass to Williams, this time for 21 yards, to extend Sierra Canyon’s lead to 28-14. In the fourth quarter, Trailblazer junior DJ Harvey intercepted Santa Margarita quarterback Colt Fulton and returned it 63 yards for a touchdown to make it 35-14.

“DJ [Harvey] is an incredible player,” Sierra Canyon head coach Jon Ellinghouse said after the win. “He’s had a great year for us and he made a play when it counted to get us a touchdown on defense which is always awesome.”

Harvey is one of the top cover corners nationally in the 2021 recruiting class and he showed it tonight with his pick-six. He also had a pass-breakup earlier in the game and he caught multiple passes on offense. He’s a special talent and was the co-MVP tonight along with Peery.

Santa Margarita scored a late touchdown on a six-yard pass from Fulton to Tyler Wetmore that made the score 35-21 with 2:24 to play. Santa Margarita recovered an onside kick after the score, much to the frustration of Ellinghouse.

“I was disappointed there in our special teams and execution at the end of the game,” Ellinghouse said. “We work hard at that and we have to be better.”

Sierra Canyon went on to stop Santa Margarita on a fourth down at the two yard line following the onside kick. That stand effectively ended the game.

It was a flag happy officiating crew tonight, which annoyed both head coaches. Sierra Canyon had two touchdowns taken off the board due to penalties in the first quarter.

How many great games were there tonight in Division 2? Chaminade rallied to beat Norco, Long Beach Poly beat Orange Lutheran in overtime and Vista Murrieta took down Notre Dame on a last second field goal.

The Sierra Canyon and Santa Margarita matchup was competitive too. That’s great news for the Southern Section.