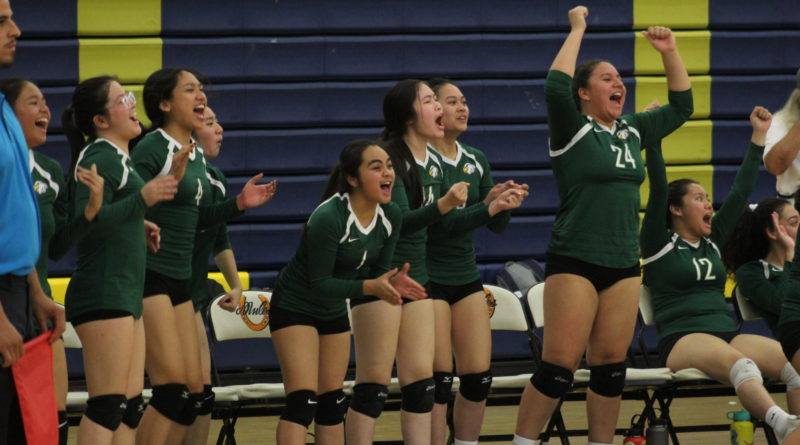 LOS ANGELES — Eagle Rock’s City Title dream looked over. The Eagles trailed Granada Hills 14-13 in the critical fifth set of their Open Division semifinal match on Wednesday. Eagle Rock was a lost point away from a crushing 3-2 defeat in a match they once led two sets to zero.

“I was shaken up,” Eagle Rock senior Wendy Jurenec admitted after the game.

Even the usually stone faced Tom Harp, Granada’s head coach, was showing emotion in that moment. The Highlanders had a chance to put the match away at the net on that point and Harp raised his arms in excitement. But Eagle Rock controlled the return and rallied to win the point which evened the set at 14.

The Eagles took the next two points from there to win the fifth set and the match. The gym erupted.

For the Eagle Rock senior class, this championship run has been in the works since they were sophomores. At the end of the 2017 volleyball campaign, the team continued to practice through November, after the season had ended.

“Normally we take a month and a half break,” Eagle Rock head coach Tim Bergeron said. “We didn’t have a gym because of basketball. We were outside on grass because they wanted to practice.”

Flash-forward to November 2019, and Eagle Rock is a win away from an Open Division championship. The hard work from the players has paid off, but Bergeron deserves credit too.

Eagle Rock’s head coach scheduled a brutal regular season for his group this year to better prepare them for the playoffs. The Eagles faced off against six of the seven other teams that made the LA City Open Division field in 2019. Eagle Rock played many of the teams twice, going 8-1.

“We had a very tough season,” Bergeron said. “It was the most difficult schedule you could have.”

Eagle Rock played three five-set matches during the year and won all of them. Tonight, it looked like that streak may come to an end, but the Eagles kept pushing.

“You have to remember all of the preparation, the four years of work in those situations,” Jurenec said. “…You have to keep fighting through all the adversity…This is the furthest our team has ever gone. It’s been a rollercoaster up and down, but we made it.”

Eagle Rock has faced off against Palisades, their championship foe, twice this season and won both matches. Bergeron is ready for Saturday and knowing the way they prepare, his players will be too.

“The expectation is to win, but it’s going to be tough,” he said.