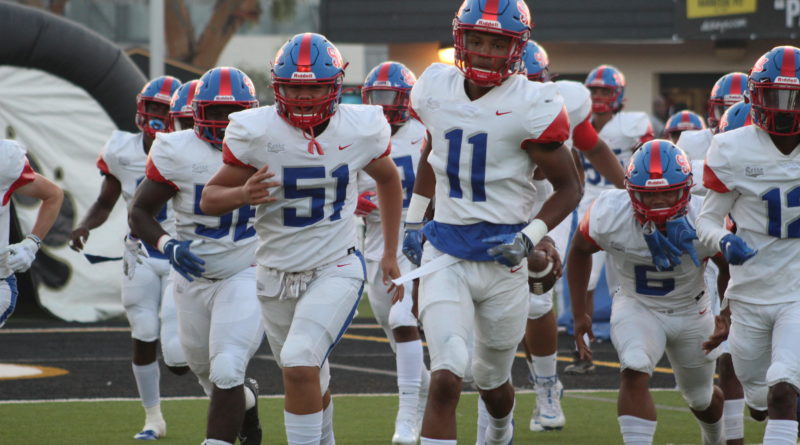 For the first time this season, all the stakes are the same for every CIF Southern Section football game. It’s win or go home.

This week’s countdown of the top games is solely based on which playoff games have the most potential to come down to the wire. Division 1 teams have a bye week, so the list features the top games from Divisions 2-16.

Sure, it was an up-and-down year for Tustin, who lost a bunch of close games to very good teams. But there certainly are not 14 other teams that Sunny Hills would rather face in Division 8 as a reward for winning the top seed.

Of Tustin’s five losses, all were competitive and four came against legitimate middle-division championship contenders other than a close loss to Pacifica (Garden Grove). The other four came against Capistrano Valley, Foothill, Ayala, and Cypress.

Tustin doesn’t put a ton of points on the board, but their defense could hold up in higher divisions. The Tillers are easily a top-10 team in Division 8, nearly top-five, and playing with house money against the top seed, this could be a trap game for Sunny Hills. There is a gap, but it’s not huge.

It’s been a great year for Elsinore, who cruised to a league title after a difficult preseason. They lost convincingly to Heritage, Rancho Verde, and Temecula Valley, in which there’s no shame, and otherwise took care of business the whole season.

That said, Carter isn’t that far behind. The Lions have been in a lot of fast-paced shootouts this season, and have gained some good experience for the playoffs with a lot of close games both won and lost. After starting with two wins, Carter suffered a four-game losing streak that included a bad loss to Etiwanda, but they were competitive against San Gorgonio and Serrano, and the other was against Cajon. They are 3-1 in their last four games, and the loss was surprisingly close against Citrus Valley in which they put up 32 points.

Both of these teams are on a roll and know they can win if they bring their A-game. Elsinore has the edge, but this projects as one of the most exciting games of round one.

Downey’s record is very deceptive. Their preseason was stacked with Corona del Mar, Alemany, Kapolei (Hawaii), and Hart, the latter two of which came down to the wire. They would have gone 4-1 in league if not for a 39-35 loss to a formidable rival in Warren.

La Mirada did great to keep up with Yorba Linda in a close loss, and has a signature wins against Cathedral and South Hills. They also lost to strong but not elite programs in Mayfair and St. Margaret’s. They are not unbeatable.

The Matadores are the favorites here, but this is anybody’s game. The records don’t show it, but Downey has been arguably steadier this season when you factor out strength of schedule. La Mirada will be very difficult for them to beat if they bring their A-game, but that’s far from a given.

Ventura had two narrow losses in the preseason against Santa Barbara and Newbury Park that can definitely be held against them, as a lot of Division 7 teams with great records pulled out close wins against foes of similar prestige. But the other three losses came against Oxnard, Pacifica (Oxnard), and Camarillo. And the rest of their games have been convincing wins.

That’s dangerous for Northview, who has been great this season but doesn’t have many wins against worthy adversaries. They had a great win against El Rancho to open the season, and the other seven have been simple cases of taking care of business. Their two losses were by multiple touchdowns to very good teams in Los Altos and San Dimas. It’s not a knock against them, but their schedule has been pretty easy, and Ventura isn’t that far behind.

It was a laughably difficult schedule for Roosevelt, who lost by a wide margin six times and won the other four games as expected. They opened up with four straight losses by 18 or more points against Rancho Cucamonga, Glendora, Tesoro, and Murrieta Valley. Then they beat Rancho Mirage, Corona, King, and Santiago, and are coming off back-to-back blowouts against Norco and Corona Centennial that were as ugly as expected.

South Hills is one win ahead of them, with five losses that were all against reasonable competition. They have a couple nice wins, with the best coming against Eisenhower. Neither of these teams is in a different boat from each other–Roosevelt has just lost uglier because they’ve faced a bunch of upper-division contenders. This game is completely up for grabs between two teams that are most likely very hungry for evenly matched competition.

While very few teams in the country can hold them below 30 points, the Cougars’ defense has been a little disappointing this year. Norco has only lost twice this season, but both have stung and were the result of more than 60 points allowed. The first was a shocking 63-35 loss to Rancho Verde, and the second was a 61-23 defeat at the hands of Corona Centennial who were on pace for easily over 100 points if they didn’t pull the plug early in the second half.

All that said, Norco is easily deserving of their third spot in Division 2, no questions asked. But drawing Chaminade seems more like a punishment than a reward for a great season.

Chaminade is only 5-5, but they turned heads by going 3-2 in the Mission League, which included breezing past sizzling hot Notre Dame, keeping it respectable against Bishop Amat, taking Alemany to overtime, and defeating a Gardena Serra squad that had star QB Doug Brumfield back from an injury. Norco is of course the favorite, but Chaminade is a legitimate contender to win the entire tournament from the bottom of the bracket.

As great as those six games will be, the top five are on another tier.

Division 6 is so stacked with legitimate contenders this season that the collateral is two of the best ones having to go against each other in the first round.

It’s win or go home for both of these teams. Despite being well-situated with young talent, Apple Valley is ferociously dedicated to sending this senior class out with a bang. San Jacinto, who came into this season with championship aspirations, is presumably in the same boat.

Apple Valley has been close to perfect this season, annihilating numerous very competitive middle-division teams, but they did lose a winnable game for the league title early in league play against Serrano that would have made a world of difference in their seeding. But San Jacinto has to be considered the favorite because of a great record with a more difficult schedule. Their 41-3 beatdown of Temecula Valley is arguably the best performance for a Division 6 team this season. They’ve also beaten Murrieta Mesa, Beaumont, and Citrus Hill, mostly with room to spare. This could be anyone’s game.

Playing in the brutally tough Southwestern League, Chaparral’s losses came against Vista Murrieta, Murrieta Mesa, and Temecula Valley. The defensive collapse against Murrieta Mesa is a blemish on the record, and they had a very easy preseason, but does all of that really offset a win against Murrieta Valley?

Hart lost two games in league by a total of three points, and that was against Valencia (Valencia) and Golden Valley. The Indians are formidable. But the fact that they’re arguably underdogs in the first round of the playoffs makes this one of the potential games of the year. This is a true 50-50 game.

If you like tossups between unpredictable teams, this is a great game for you. Oaks Christian has been the definition of unpredictable all year, largely due to a number of injures of extended time including arguably their two best players, MLB Mister Williams and QB Jameson Wang. They’ve been in better health later in the season, and finally strung some nice wins together while very nearly knocking off Calabasas. But that’s not before their season turned into a disaster relative to an incumbent D1 semifinalist with high hopes for this season.

Upland hasn’t been as unpredictable, but it’s hard to peg down just how good they really are. They almost never give up too many points, but struggle to put many up against good defenses. They beat Rancho Verde convincingly, nearly beat La Habra, but then lost to Mission Viejo and Rancho Cucamonga in surprisingly noncompetitive games. They cleaned up against all inferior competition, but for a team that wins playoff games in Division 2, you want to see them beat strong-ish opponents like Chino Hills more convincingly.

This game will likely come down to which Oaks Christian team we get. They can get hotter on any given day, but some of their wins come in slow-paced grind-out games, and that pace would almost definitely benefit Upland.

Orange Lutheran played one of the more difficult schedules in the country, and beat every opponent that wasn’t nationally ranked in the top 50-60. But they receive an at-large bid and will be the “underdog” against Long Beach Poly. The Jackrabbits’ best games were a nice 42-24 league title victory over a strong Wilson club and losing narrowly to Serra (Gardena).

Long Beach Poly certainly can win, and should have confidence coming off a great second half of the season. But Orange Lutheran is definitely the favorite in what should be an excellent game.

After posting a 9-1 season — and putting up 63 points on Norco — Rancho Verde probably deserved a top-four seed. Other than their 28-point win against Norco and 30-7 loss against Upland, they had an easy schedule, but still deserve better than Gardena Serra in round one.

Before injuries derailed their season, Serra was arguably the best team in this bracket, and an absolute Division 1 candidate. They went 4-1 in the preseason, comprised of wins over Garfield, Long Beach Poly, and Cathedral, winning at Calabasas in double-overtime, and almost beating Narbonne (who forfeited the victory). Then injuries destroyed their season again, and they went 1-4 in league play. While losing even once QB Doug Brumfield returned last week against scorching hot Chaminade was disappointing, they did beat Alemany the week prior.

In short, Serra deserved not to lose another regular season to multiple key injuries, and Rancho Verde deserves not to face Serra in the first round. But life is not fair, and it’s win or go home for both of these mid-bracket Division 2 contenders.