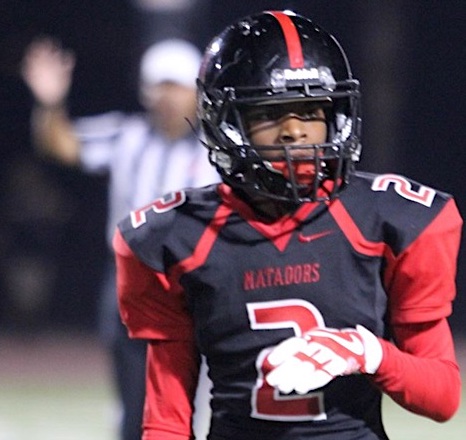 Mt. Miguel finished off the season with a big 49-26 victory over Del Norte and set a couple records in the process. Senior receiver Jahiem Allen-Pompey caught 17 passes for 268 yards during the game. Allen-Pompey now holds the CIF San Diego Section record for both receptions in a season (102) and receiving yards in a season (1,921) and is only two receiving touchdowns away from tying that record (24). He’ll look to add on to his historical season as the Matadors host Coronado in the 1st round.

Lincoln sent shock waves throughout the county on Friday night when they took down #2 Cathedral, leading throughout before eventually finishing it off, 24-19. Lincoln’s defense held Cathedral to 7 of 18 passing and forced two fumbles by Zavien Watson. Keyshawn Smith had 8 catches for 96 yards and 2 touchdowns on the night. The win pushed the Hornets up the division 1 rankings and gave them the 2-seed and a bye in the 1st round as they await the winner of the Rancho Bernardo – Torrey Pines game. The Dons weren’t negatively affected by the result as they held onto the 2-seed in the Open Division bracket and will host Carlsbad in two weeks in a rematch of last season’s semi-final in which the Lancers were beat 35-0.

Francis Parker pulled out a big victory in week 11 as they took down La Jolla Country Day, 58-50, in a shootout to claim an undefeated Pacfic League Championship. The Lancers ran for 560 yards, so it only made sense to recognize their entire offense as top performers. Freshman Chris White had a huge game as he carried the ball 13 times for 219 yards and a touchdown. Senior Trevor Brokowski also contributed with 16 carries for 117 yards and 3 touchdowns.

Junior Jaycob Hicks stepped in at quarterback for Morse and helped the Tigers to a six touchdown win over University City. Hicks was 2 of 2 for 28 yards and a touchdown, but did major damage on the ground, carrying 10 times for 201 yards and 4 touchdowns.

Montgomery grabbed the Metro – Pacific League Championship on Friday night as they made a statement in a 34-10 win over previously unbeaten Castle Park. Senior quarterback Keoa Gumataotao came up big as he went 11 of 17 for 199 yards and 4 touchdown passes to help the Aztecs.

It’s been an up and down season for Grossmont, but senior quarterback Jaime Odom ended the regular season on a high note. Odom was 21 of 28 passing for 292 yards and 4 touchdowns. He also ran 13 times for 112 yards and scored 2 more touchdowns for the Foothillers.

With the playoffs coming up this week, Mt. Miguel’s passing attack appears to be in top form. The connection of Jacob Laverdiere and Jaheim Allen-Pompey has been lethal all season and that continued on Friday night. Laverdiere was 26 of 35 for 365 yards for 5 touchdowns and also for another touchdown. Allen-Pompey had 17 catches for 268 yards and 4 touchdowns in the Matadors win.

Torrey Pines junior linebacker Marco Notarainni showed his versatility for the Falcons on Friday night. He racked up 12 tackles, a sack, a forced fumble and caught a 13-yard touchdown pass while also serving as the Falcons punt returner.

How I Voted This Week:

Mira Mesa grad Damien Williams ran for 125 yards and a touchdown in Kansas City’s win over Minnesota on Sunday.

Bishop’s grad Mozes Mooney had 4 catches for 53 yards and his 1st career touchdown in Columbia’s loss to Yale.

Top Playoff Games in Round 1: