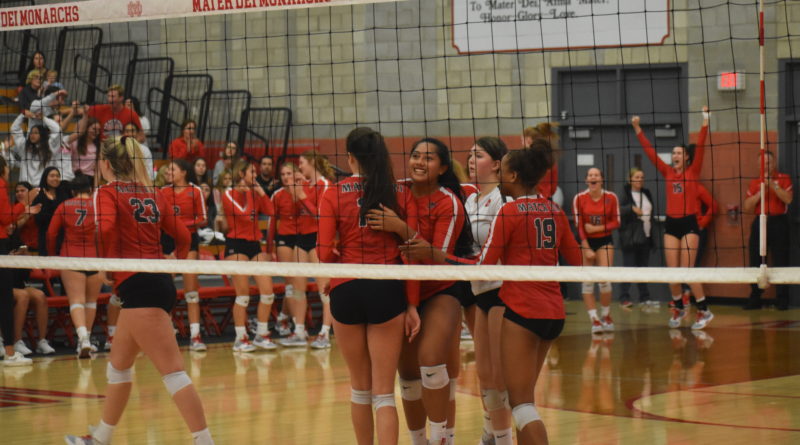 SANTA ANA– Mater Dei was 28-4 coming into Saturday’s Division 1 semifinal against Marymount. Half of their losses had come to Marymount, who is ranked in the top five in the country along with Mater Dei. But their 0-2 record against the Sailors was no problem for the Monarchs, who turned the tides when it mattered most.

Both teams came out with lots of energy and played extremely well, with almost zero unforced errors committed on either side throughout the night. In the first set, the two teams traded blows and were tied at 11-11 before Mater Dei went on a big run and won the set 25-18.

Marymount came out with even more fire in the second set, and jumped out to a 9-4 lead that turned into 17-11. Mater Dei cut the lead to 18-16, and the next ten points were alternated with Marymount’s lead oscillating between one and two points. The Monarchs couldn’t cut the deficit any further, and Marymount took the second set 25-22.

The third set managed to be even more exciting than the first two. The Sailors’ momentum from the previous set spilled over into set three, and they again sprung out to a 14-9 lead. From there, Mater Dei turned up the heat even more and balanced fundamental impeccability with aerial aggression, and went on a 8-2 run that netted them a 17-16 behind a lot of long rallies and scorching kills. Marymount ended the run after that to reclaim the lead at 21-20, but Mater Dei refused to slip up or turn down the jets and won the set 26-24.

While the Sailors never let up one drop, Mater Dei’s momentum was essentially unstoppable at that point. The Monarchs came out with a 9-2 lead before Marymount fought back to cut the deficit to 10-8. Marymount never went away or stopped battling and attacking, but Mater Dei eventually took a 17-13 lead and won the set comfortably at 25-19.

Mia Tuniga was arguably the best player on the floor and a steadying force for Mater Dei. She dominated both around the net as a striker and blocker, and as the recipient of a number of hard slams from Marymount that turned into clean digs. Zaria Henderson flew high for a number of vicious kills at key times. At 6-3, Meg Brown was also a matchup problem for the Sailors around the net. Cadence Gronski, Reagan Merk, and Jordyn Schilling all received heavy floor time and were outstanding at deflecting would-be kills from Marymount and setting up the primary strikers.

Marymount came up short but also had a tremendous all-around effort. Elia Rubin (C/O 2022) was also in the running for the best performance of the night, constantly putting the heat on Mater Dei in the air and not looking one bit like an underclassman. Sophia Globe, the libero, was everywhere, digging out what seemed like indefensible slams from the Monarchs. Kerry Keefe, another star sophomore, was also a force around the net for the Sailors. Despite the loss, they certainly looked like a top-five volleyball team in the country.

Mater Dei’s 3-1 victory puts them in the finals against Redondo Union, who, like Marymount, is ranked top ten in the country and is unbeaten on the year against Mater Dei (1-0) behind an epic comeback victory from match point early in the season. That said, if their win against Marymount was any indication, Mater Dei doesn’t care what happened in the regular season–they are firing on all cylinders and playing with both poise and aggression from the opening serve to the finish.