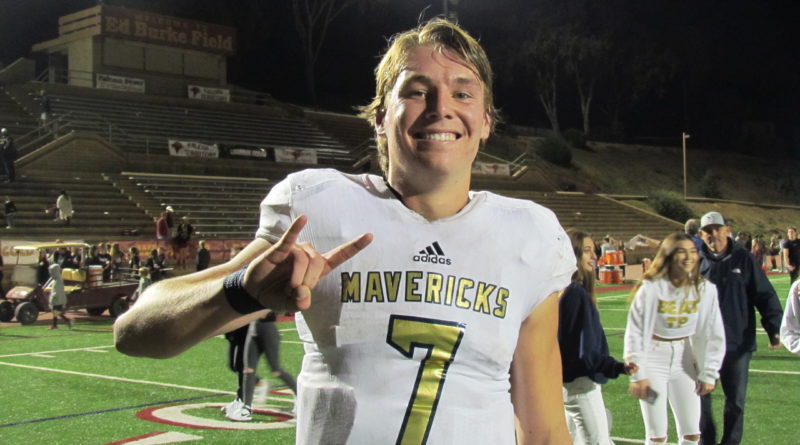 La Costa Canyon erased a 10-0 halftime deficit to beat Torrey Pines, 21-13, on Friday night in the annual Beach Bowl. The Mavericks snapped a two-game losing streak to the Falcons in which they had been outscored 78-0.

La Costa Canyon captain and senior quarterback Marshall Eucker was efficient as a passer, going 7 of 11 for 106 yards and a touchdown, but decided to allow his mobility to do the talking.

Running back Aiden Lippert returned to the lineup a few weeks ago and has provided a huge spark to the Mavericks offense.

“I’m not really a power back but I just try to make them miss so they don’t have a straight on tackle,” Lippert said after registering 101 total yards and a touchdown.

Torrey Pines sophomore quarterback Brayden Fowler-Nicolosi showed good poise throughout the night completing passes to 5 different receivers, including one across the middle to junior Marco Notarainni who barreled his way into the endzone for the Falcons lone touchdown.

“If I have to tell them something extra to get them ready for this game, then they don’t belong on the team,” Mavericks’ coach Sean Sovacool said postgame.

“It was just revenge time. You know they embarrassed us the past two years, we wanted to get revenge for the kids who couldn’t do it.”

The Falcons completed a 30-yard pass to Wyatt Gardner on 4th down to give them 1st down at the Mavericks 29-yard line trailing 21-13. Torrey Pines then lost 5, 10, and 14 yards on consecutive plays as they turned the ball back over to La Costa Canyon to run out the clock for good.

La Costa Canyon’s 1st half time of possession was limited after two long Torrey Pines drives and a lack of execution from the Maverick’s side. When they got the ball to begin the 2nd half it became clear that some things had changed.

“We knew we just had to come out and smash them in the mouth, run some tempo and get them off their game,” Marshall Eucker said.

What exactly did the Mavs do?

“We ran some RPO (run-pass-option) and they had some trouble in space, we just went after them,” Eucker added.

The Mavericks scored touchdowns on all three 2nd half possessions and were assisted by a late defensive stop that got them the ball back for good.

The Falcons came in having won 2 in a row and 3 out of 4 in this series.

“They’re are biggest rivals, all through childhood we want to beat them, it’s just huge to beat them as seniors.”

The series first began in 1996 but it wasn’t until 2004 when La Costa Canyon was able to pick up their 1st win. The rivalry has blossomed since then becoming one of the premier games each season in North County and throughout San Diego.

With both teams locked into CIF Division 1 playoffs, the attention now shifts on the postseason. The Mavericks have now likely clinched a home game in the first round while the Falcons will have to travel as they open up the playoffs.