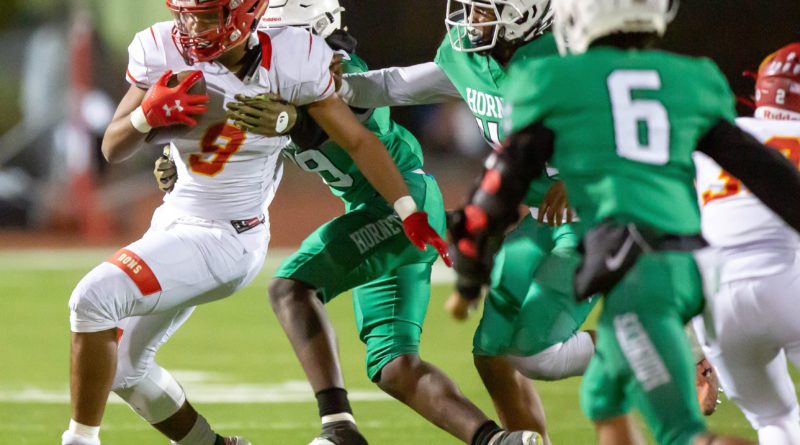 Bryce Young capped off a spectacular regular season by going 17-for-17 with five TD passes. The Monarchs will be the top seed in the CIF Southern Section Division 1, with a bye until the quarterfinals.

D.J. Uiagalelei threw for 282 yards and four TDs as St. John Bosco locked up the No. 2 seed in CIF-SS Division 1.

Because of the recent events associated with the Kincaid fire and PG&E power outages in Northern California, the North Coast Section has extended the regular season for an additional week. Seeding for the playoffs will take place the weekend of Nov. 9-10.

The Diablos won the South Coast League championship for the 10th time in the past 11 seasons. They’ll find out their Division 1 playoff seed on Sunday, but it’s likely to be No. 4.

The Highlanders won the Grossmont Hills League and will likely be the No. 1 seed in the San Diego Section Open Division .

This one sent shockwaves across the state. The Dons came with a Top 25 national ranking, which clearly did not faze Lincoln.

The Huskies haven’t been challenged since early September. They will likely be the No. 3 seed in the CIF-SS Division 1 playoffs.

The LAUSD has banned Narbonne from the 2019 and 2020 playoffs. As a result of the news — which came down Thursday afternoon — school officials decided to cancel Friday night’s game.

The Bulldogs are looking for their ninth consecutive section championship.

Servite will likely be the No. 5 seed in the CIF-SS Division 1 playoffs, setting up a potential matchup with No. 4 Mission Viejo.

The Sea Kings won the Sunset League with another dominant performance.

The Lions went 3-4 down the stretch, with losses to St. John Bosco, Servite and Mater Dei. They will likely be the No. 6 seed in the CIF-SS Division 1 playoffs.

The Lancers finished strong. Now they will probably get Mater Dei in the D-1 playoffs.

The Coyotes game vs. St. Bonaventure was canceled due to smoke from the Maria Fire. Calabasas will move on to the CIF-SS D-1 playoffs, where they will likely face St. John Bosco.

Sierra Canyon struggled, but they won the Gold Coast League title for the second consecutive year.

The Saints held off Point Loma and will find out their San Diego Section playoff seed Saturday.

*Upland forfeited games to Crenshaw and Damien due to an ineligible player.

A week after losing star QB Daylin McLemore to a season-ending injury, the Padres’ defense rose to the occasion. Serra now has a one-game lead in the West Catholic Athletic League with one week remaining.

Despite the loss Camarillo still has a good shot at being the No. 1 seed in CIF-SS Division 4.