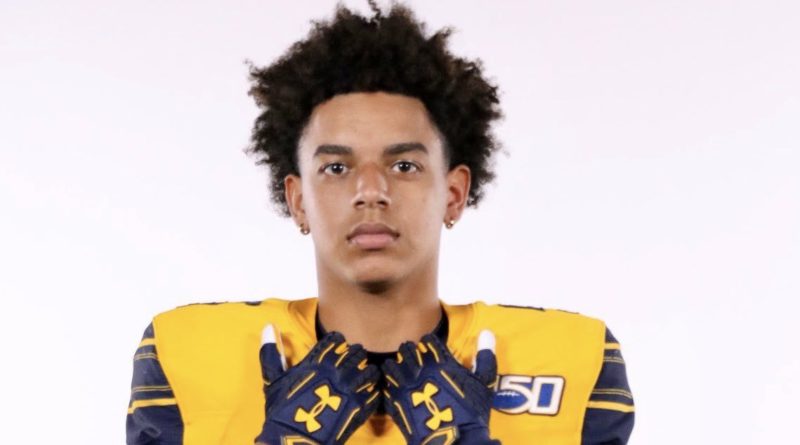 There are dozens of outstanding two-way football players in the San Diego Section. As we wrap up the 2019 regular season here’s a look at the Top 10 players that play on both sides of the ball:

Bainer, who recently committed to San Jose State, has done a little of everything for the Knights this season. He’s attempted 3 passes, carried the ball 20 times, caught 32 passes, recorded 28 tackles, and has returned punts and kickoffs while scoring 9 total touchdowns.

McWilliams committed to Cal two weekends ago where he plans to play cornerback for the Bears. While he’s been at St. Augustine, he’s done just about everything for the football team in addition to serving as the Saints point guard come basketball season. So far this season he’s caught 13 passes for 295 yards and 3 touchdowns, made 21 tackles, grabbed 2 interceptions, returned 7 punts, and has served as the Saints punter averaging 33 yards a kick.

Mira Mesa’s roster is one of the youngest in San Diego this season, but they’ve been helped a lot by the senior experience of Thomas. As a running back he’s carried for 1,185 yards and 14 touchdowns through 9 games. Taking on the role of the featured back has lessened his time on defense from a season ago, but Thomas has still recorded 12 tackles and returned an interception 51 yards for a touchdown.

In Santa Fe Christian’s triple-option offense Hogan’s role is really just another running back. In 9 games so far this season he’s attempted only 37 pass attempts and instead has done his damage on the ground running for 614 yards and 9 touchdowns. On defense he’s been a big contributor in the secondary doing a little bit of everything. He’s collected 27 tackles, a sack, an interception, has blocked a kick, and has recovered 5 fumbles for the 6-3 Eagles.

Another talented two-way player from St. Augustine, Tucker’s play this season has given a good preview of what’s to come later in his career. He’s grabbed 12 passes for 306 yards and 3 touchdowns. On defense he has 17 tackles, 5 pass break ups, an interception, and has forced 2 fumbles while also serving as the kick returner. He’s picked up offers from San Diego State, BYU, and Washington State and looks to be as good of a sophomore prospect as their currently is in San Diego.

Olympian hasn’t had the season they would’ve liked for 1st season coach Ryan Van Nostrand, but senior Anthony Gilpin has proven himself as one of the county’s top athletes. In 9 games Gilpin has brought in 48 catches for 840 receiving yards and 9 touchdowns. He’s been just as good on defense registering 60 tackles, 5 interceptions, 4 forced fumbles, a sack, and a blocked field goal.

Williams has burst onto the scene this season as a top playmaker for the 6-3 Broncos. He’s brought in 42 passes for 667 yards and 4 touchdowns from Rancho Bernardo quarterback Zeke Payne. Williams has been equally impressive on defense making 32 tackles and grabbing 5 interceptions. He’s also served as the Broncos kick and punt returner throughout the season.

There might not be a player in San Diego that has played as many roles successfully as Aguon has. The senior has attempted at least 1 pass in 6 different games, he’s rushed for 451 yards and 8 touchdowns, and he’s caught 38 passes for 602 passes and 11 touchdowns. On defense he’s managed 32 tackles, 6 pass break ups and an interception for the 4-5 Buccaneers.

The Lancers were able to roll through the Avocado League and enter week 11 on a 6 game winning streak thanks in part to many senior contributors. Senior DJ Young has made a big impact on both sides of the ball for the Lancers in just about every game. On offense he’s racked up 573 all-purpose yards and 6 touchdowns. On defense he’s tallied 45 tackles, 3 interceptions, 3 pass break up, and a forced fumble for the 8-1 Lancers.

Poway enters the last week of the regular season with a 6-3 record looking to cement their spot of hosting a division 2 playoff game and having an outside chance of a 1st round bye. A big reason for their success has been the continued dominance of senior Colby Kopacz. In the Titans run-heavy offense he serves as the 2nd running back behind Jared Butler, where he’s averaging 5.5 yards per carry and has scored 4 touchdowns. On defense he’s recorded 37 tackles to go along with 11.5 sacks which currently puts him in the county lead. He’s also blocked 2 punts, a kick, and has recovered a fumble.