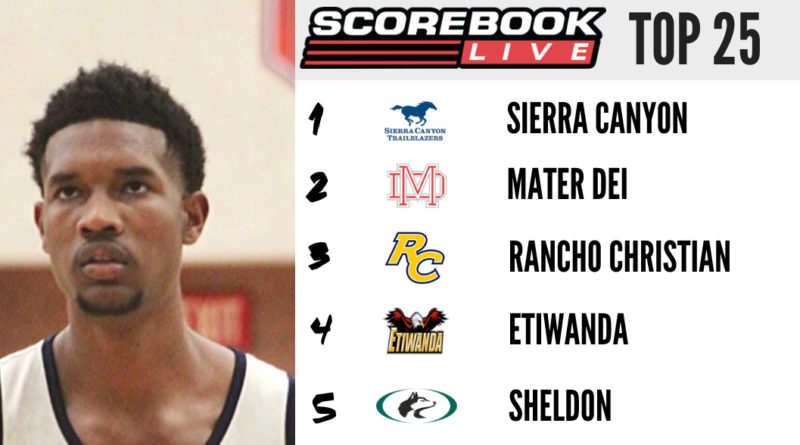 Here are Scorebook Live’s preseason Top 25 California high school boys basketball rankings. Our rankings encompass the entire state and are compiled by Scorebook Live California reporters Connor Morrissette, Bodie DeSilva and Lance Smith. The rankings will be released weekly during the regular season, which starts the week of Nov. 18.

Mater Dei junior point guard Devin Askew committed to Kentucky a few weeks ago. Seniors Aidan Prukop and Ryan Evans as well as junior Harrison Hornery, Wilhelm Breidenbach, Nick Davidson and Casey Jones are the other names to know. The Monarchs fell to Sierra Canyon twice in postseason play a year ago.

Senior forward and Arizona state commit Marcus Bagley returns for the team that fell to Sierra Canyon in the state championship a year ago.

Salesian went 31-1 a year ago and return a good portion of their core.

Windward grew up before our eyes a season ago and everyone is back for 2019-2020. Senior forward Devin Tillis leads the Wildcats along with super sophomores Dylan Andrews and Kijani Wright.

St. John Bosco doesn’t have a standout player that teams will specifically look to stop like a few of the teams above. Instead, the Braves have strong depth and a roster filled with reliable players who know their roles and execute them well. Senior point guard Josh Camper is an underrated guard in the region.

Modesto Christian handed Salesian their only loss a year ago. Despite losing sophomore guard Devin Day to a torn ACL, the Crusaders are a dangerous team again in 2019-2020.

Mayfair have two of the nation’s top high school players in senior Joshua Christoper and sophomore Dior Johnson. Mayfair will go as far as these two take them.

Bishop Montgomery lost a great group of seniors from a year ago as well as Bradley Ezewiro who transferred to Oak Hill. The Knights will still be solid led by 2020 big man Isaiah Johnson, but the losses hurt.

The Dons talented core adds senior Beon Riley to the mix for the 2019-2020 season.

Birmingham are City Section Open Division title contenders. Brothers Corey Cofield and Elisha Cofield (2021 and 2020 respectively) as well as juniors David Elliot and James Nobles want revenge on Westchester after falling to the Comets in the semifinals a year ago.

It’s a new look Westchester team in what could be Comet head coach Ed Azzam’s final season. Senior guard Kymani Pollard is the lone impact player from a year ago to return. The Comets have also added 2021 guard TJ Wainwright, a transfer from Santa Monica.

“I’m really excited about this year’s team,” said head coach Yancy Dodson. “I would put our guard corp of Lamont Butler, DJ Davis (Corona Centennial transfer), Evan Oliver, and Chance Stephens (transfer) up against any guard corp in the state. We have another returning starter in senior forward Derek Rubidoux who does nothing but impact winning. Senior guard Budd Bernie, who is also a 3 year starter at quarterback for the Varsity football team, returns after being 6th man for the last 2 years including as a sophomore on the team that went to the CIF Championship Game. We also have a pair of 6’5” junior forwards, in Mason Bates and Travis McDowell, who will give us what we need up front.”

Corona Centennial lost three starters from last year’s team to transfers. Jaylen Clark (Etiwanda), DJ Davis (Riverside Poly) and Dennis Cash (Trinity International Prep in Nevada) all will be playing at new schools this season. The Huskies will be young due to the departures, but they do have two talented seniors in Paris Dawson, a Portland State commit and Mason Machado, a 6-foot-7 senior who is committed to Northwest Nazarene. With all the transfers, junior guard Donovan Watkins will have an increased role in 2019-2020. Corona Centennial has a good incoming freshman class with PG Jared McCain, F Aaron McBride and F Jeremiah Whitmore.