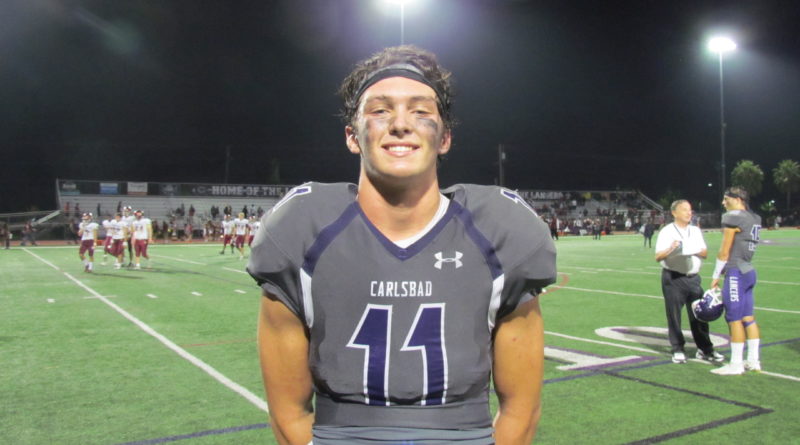 Carlsbad finished off the Avocado League portion of their schedule on Friday with a 14-7 victory over La Costa Canyon. After losing 12 league games over the past 3 seasons, the Lancers were able to grab an undefeated Avocado League Championship. Carlsbad outscored their opponents 151-62 in league and looks to have firmly placed their mark into a second consecutive Open Division Bracket.

The Lancers regular season finale will come against Vista, who happens to be on very similar path. After a forfeit and a 1-point loss to open the season, the Panthers have dominated with their rushing attack on the way to 7 straight wins and an undefeated Palomar League Championship, their first since 2009. The playoff rankings have not been kind to Vista despite their current winning streak. The Panthers currently sit as the 6-seed in division 2 and will look to upset Carlsbad in week 11 to improve their spot.

Oceanside revenged last season’s loss to Torrey Pines with a 28-7 victory on Friday night. The Pirates were led by junior running back Kavika Tua who ran for a career high 254 yards and 3 touchdowns.

Valley Center had their game against Escondido moved to Saturday because of a local fire, but that didn’t stop senior running back Kyler Riche. He ran for 239 yards and scored 2 touchdowns on only 17 carries.

With Cael Patterson and the Orange Glen rushing attack being shut down on Friday night, the Patriots got a big effort from senior wide receiver DJ Harris. Harris reeled in 7 catches for 239 yards in the win over Santa Fe Christian.

La Jolla Country Day continued their perfect league record with a win over Escondido Charter on Friday. Senior linebacker Zach Alligood set the tone on defense with 21 tackles and a forced fumble.

Carlsbad’s DJ Young had 11 tackles and an interception on Friday night as the Lancers beat La Costa Canyon to clinch the Avocado League Championship.

Montgomery shutout San Diego Southwest on Friday with a huge showing from Benjamin Larsen. The junior safety had 7 tackles, a sack, and forced 3 fumbles.

Mt. Miguel grad Cory Littleton had 8 tackles, half a sack and a quarterback hit in the Rams win over the Atlanta Falcons.