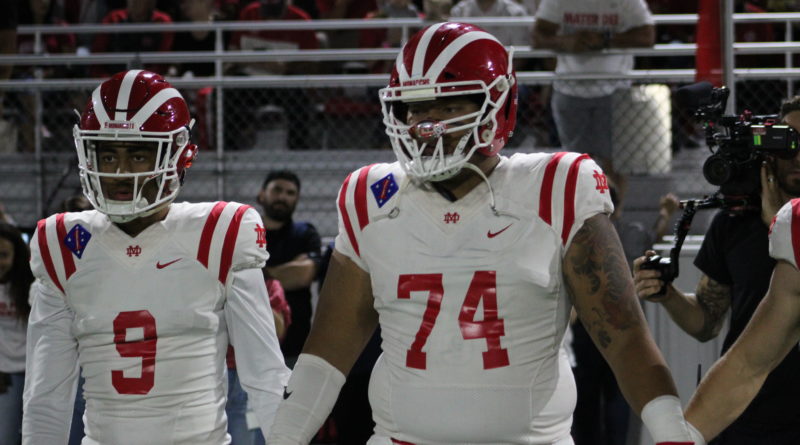 Mater Dei jumped out to a 21-3 lead in the first half and never looked back. They opened the game with a four-and-out and scored two minutes in on a pass from Young to Kody Epps. Logan Loya got the Braves on the board in the first quarter with a field goal to make it 7-3, but Mater Dei followed it up with a rushing touchdown by Young on a fourth down and another touchdown pass from Young to Epps.

St. John Bosco came back with a touchdown of their own from QB DJ Uiagalelei to Loya in the second quarter, but a field goal by Mater Dei extended the lead to 24-10 going into halftime.

Young and Epps share our honorary game ball after connecting on three touchdown passes. In fact, Epps had over a hundred receiving yards by the end of the first quarter. And Mater Dei’s two other touchdowns came on rushes from Young.

As usual, Mater Dei’s victory was a complete team effort. Their offensive line and defense both looked like the best in the country, for the consensus best team in the country.

Defensively they were led by cornerback Jaylin Davies, who had an interception in the end zone among other big plays on the night. Their entire secondary was outstanding, including S Nate White, as was their front seven–from front to back, the Monarchs have the best defense in the country with zero weak links. LB Raesjon Davis was excellent, and his night included a fumble recovery. While there wasn’t a crazy amount of sacks, their defensive line gave Bosco’s enormous offensive line a decent amount of trouble. He’s not the scrambler Young is, but Uiagalelei did not have nearly as much time as him for most of the game.

Uiagalelei was great, throwing for 312 yards and two touchdowns. His receivers were solid, although they dropped far more solid passes than usual. Kris Hutson and Logan Loya both had touchdown catches. Nathaniel Jones shouldered a pretty decent workload and had a rushing touchdown.

Early on, the Braves’ defense was getting shredded, but around the middle of the second quarter, they turned it up considerably. After Mater Dei held a 21-3, Bosco won the rest of the game 21-17, largely thanks to some very strong flashes of play from their defensive line.

The Braves were only down by two touchdowns in the red zone with over two minutes left when Davies picked Uiagalelei, who had no choice but to force something in the end zone. That touchdown immediately put the game out of reach.

After the game, DJ’s father, Dave Uiagalelei, said that DJ suffered a high ankle sprain last week. DJ and the program decided to keep it from getting leaked before the game, and Uiagalelei did an outstanding job toughing his way through it – he still put up 312 passing yards on one of the best defenses in the country despite not having even done any running in practice until Thursday, the day before the game.

There were a couple instances where Uiagalelei passed up the opportunity to run when he had some openings. While he’s not a trademarked dual-threat QB, he’s a great runner for a pro-style quarterback, especially one of his size, and the couple times he did keep the ball he seemed to lack burst. The Braves would have had a solid chance of converting some promising touchdown drives if their enormous slinger could have had all his tools available.

The Braves have three weeks before their first playoff game, and Dave Uiagalelei has no concerns that DJ won’t be at full-strength by then. But for this week, keeping the injury a secret made complete sense.

THEY SAID IT: PLENTY OF HOPE FOR ST. JOHN BOSCO

After all, the Braves decisively won last season’s league championship vs. Mater Dei only to lose to the Monarchs in the playoffs. Mater Dei was the better team Friday night by a margin, but the Braves have no reason to think that they can’t turn the tables if the teams meet in the Division 1 championship game, which is highly likely.

After Mater Dei tore up Bosco’s defense right off the bat, the Braves played very well on that end for most of the game after the first quarter. They even started breaching the Monarchs’ formidable offensive line for some sacks and tackles for loss. Offensively, they had three turnovers in or near the red zone, in addition to Uiagalelei playing with no mobility and more dropped passes than usual.

Mater Dei will be the heavy favorite to win if or when these two teams meet again for all the marbles. They won this game by two touchdowns without being close to perfect–they lost 160 yards due to penalties alone, and were great but far from impeccable on both sides of the ball. But St. John Bosco probably has more room for realistic growth between now and their final meeting. This game was disappointing, but they shouldn’t be discouraged going forward.