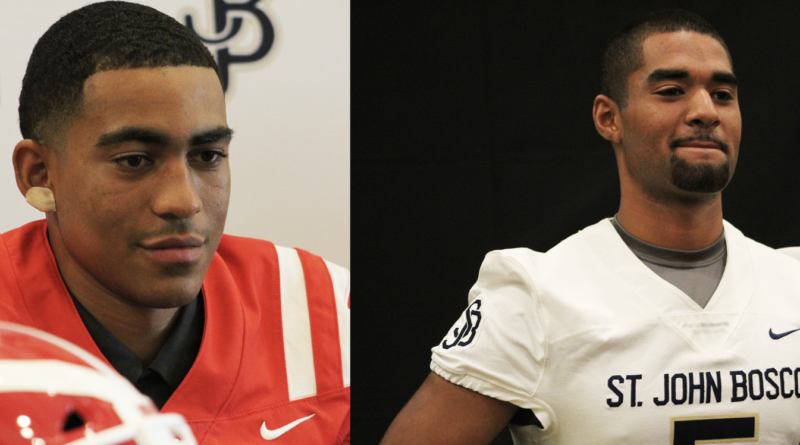 Editor’s note: This story was originally published on Aug. 3, before the 2019 season started. As the No. 1 Mater Dei vs. No. 2 St. John Bosco matchup approaches on Oct. 25 we thought it would be a good idea to re-post the story to give fans insight into the Bryce Young-D.J. Uiagalelei relationship. Enjoy.

Even though they are on opposite sides of the most heated high school football rivalry in the country, Mater Dei quarterback Bryce Young and St. John Bosco quarterback DJ Uiagalelei are close friends.

The two work out together multiple times per week at STARS Performance Training & Sports Medicine center in Anaheim.

The situation is certainly unique. For the last year and a half, Young and Uiagalelei have been able to put their high school allegiances aside in an effort to improve.

“We feed off each other and just try and make each other better,” Uiagalelei said.

Mater Dei head coach Bruce Rollinson discussed a key part of Young’s relationship with Uiagalelei on Friday. The USC commit is an intense competitor on the field, but after games he won’t share how many yards he threw for or touchdown passes he finished with.

“On Friday night Bryce will hopefully have higher statistics, but when it’s over that’s the last thing he’s going to talk about to anyone, whether it’s his own team or the opponent’s team,” Rollinson said.

That’s really the only way this could work. Both quarterbacks are extremely modest and have intense aspirations to get better, which is why they work so well together. Challengers on the field. Allies off it.

“Everyone sees the heated rivalries on Friday nights, especially between us and Bosco and within those lines it’s very serious, it’s a war, you’re in there with your brothers. But once the game is over and especially in the offseason everyone is working towards that common goal of winning and improving and you respect each other for that,” Young said.

St. John Bosco hosts Mater Dei on October 25th. However that game finishes, Uiagalelei and Young will hug it out after the final whistle. They’ll do the same thing after the Division I Southern Section championship and they’ll keep working out together at STARS in the offseason before going off to play college football.

“There’s a lot of love off the field and respect for each other,” Young said.

That’s not going to change any time soon.