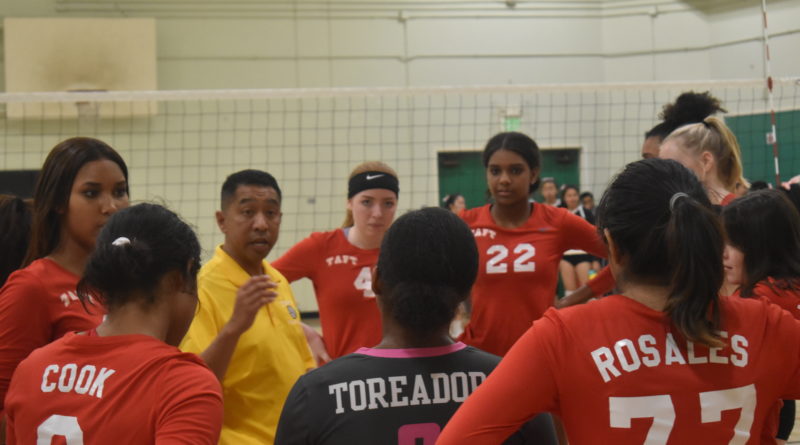 EAGLE ROCK – Monday evening, Taft defeated Eagle Rock in three straight sets to effectively guarantee the top seed in the Division 1 playoffs in the LA City Section. Eagle Rock looked like a championship contender in front of a packed home crowd and made the Toreadors work for every point, but Taft was just too much. The battle was between two league champions who went 10-0 in league play.

The Toreadors have outstanding size with six rotation players who are not only at least six feet tall, but also skilled and athletic with Amiree Hendricks-Walker (6-3), Kate Ferguson (6-2), Shelby Roloff (6-0), Nieko Thomas (6-2), Paige Johnson (6-0) and Danae Johnson (6-0). At least three or four of those six were on the court at all times, and they were surrounded by great setters who pulled out countless difficult digs.

Eagle Rock doesn’t generally lack for size, but with their tallest players at 5-10, it was impossible to match up physically around the net. The Eagles were very well prepared to quickly react to blocks and spikes from their longer opposition, and made very few errors. They had the wherewithal to pick their spots in going for kills instead of blindly trying to go through the outstretched arms of their competition. They put together some nice runs and never collapsed, but ultimately couldn’t win a set because Taft was just that good.

There’s a great chance that these teams are going to meet in the Division 1 finals or semifinals. What Eagle Rock could do to deal with the verticality of Taft would be unclear, because they conceded almost nothing on Monday. That’s for head coach Tim Bergeron to decide. Taft’s plethora of talented six-footers is going nowhere, but the Eagles are a phenomenally skilled team with strong fundamentals. They showed a ton of poise even under nonstop pressure from the Toreadors, including clutch play late in sets.

Eagle Rock’s home crowd was hyped up, but Taft’s bench, and at times, players, were also noticeably hyped. Celebrations and cheering are a part of volleyball, where every single point can instigate significant momentum. Taft has a very deep bench, and they were a cheering section of their own. Their joy and intensity very clearly bled onto the court, and once the rotation players were settled in, they displayed that same excitement. But they didn’t sacrifice any focus in bringing that swagger and energy.

“For the two hours that I have you in the gym, we’re going to work, we’re going to focus, we’re going to prepare. And, during game time, you can smile and have fun…there’s a line they can’t cross, but once you prepare yourself, have as much fun [as you want]. That’s just their personality,” Taft head coach Arman Mercado told Scorebook Live after the game.

He said that they make a point of not letting their advantage in verticality go to waste.

“Whenever we’re at the net, we’re going to be the highest one out there. It’s just a fact. So when my call-setter is setting, she’s actually jump-setting [for a kill], and nobody can reach them. Everything else, don’t wait for the block or the hitter to come get. Just get up as high as you can.”

Taft is now the clear, if not heavy favorite to win the championship. With 3-0 wins over the next top teams in Eagle Rock and Palisades, in addition to other good teams like Granada Hills, they know there’s no reason to shoot for anything less than a successful title run.

“I think our team focuses more when they know it’s a better team on the other side. If we beat you 3-0, it might be a show of respect that you’re really good and we have to take care of business.”

Below are the rest of our photos from the game: