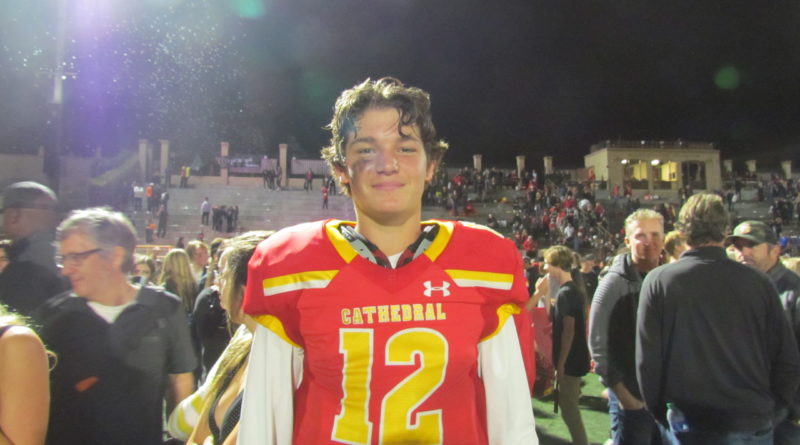 Cathedral Catholic running back Zavien Watson continued his huge senior season with a memorable performance in the Holy Bowl. The Arizona baseball commit ran for 278 yards and scored 4 touchdowns in the 2nd half to help the Dons to a come from behind victory.

Dons kicker Trevor Wahl kept the game within reach with two 2nd quarter field goals, each from 31 yards out, that narrowed the St. Augustine lead to 14-6 at halftime.

Coming into the game, the road team had been victorious in each of the last seven editions of the annual Holy Bowl.

“This is our house for a reason. No one’s gonna come in our house and disrespect us,” Watson said after completing the comeback.

Cathedral Catholic scored from 1-yard out on 4th and goal to grab their first lead of the game with 11:06 left in the 4th quarter.

After a touchback, St. Augustine quarterback Richard Colmenero was intercepted by Dons defensive back Dee’shon Swafford. The Dons drove back down and scored again to seal the game.

Cathedral Catholic quarterback DJ Ralph went down with a shoulder injury midway through the 3rd quarter leaving sophomore Charlie Mirer with the task of a comeback.

“I just had to my pickup my team,” Mirer said.

The Dons proceeded to score on four straight possessions once Mirer entered the game to win 35-14 and grab the Holy Bowl for the 2nd straight season.

St. Augustine scored as time expired in the 1st quarter when Angelo Peraza found Jalil Tucker in the right side of the end zone for a 14-0 lead.

“Nothing really changed, we just motivated each other at halftime. We knew what we did wrong and we executed in the 2nd half,” Watson said.

From then on, the Dons responded with 35 unanswered points to grab the rivalry win and likely secure a home playoff game.

“We came in at halftime knowing we were gonna come back and win,” junior defensive back Dee’shon Swafford said. His two 4th quarter interceptions helped seal the Dons victory.