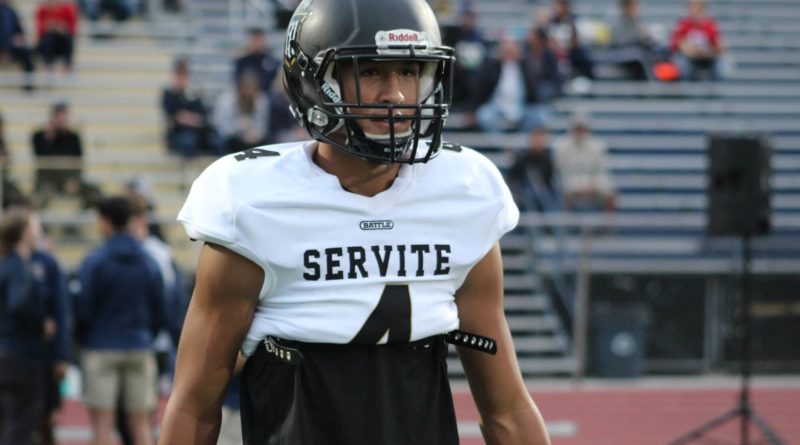 Before the 2019 football season began, I put out a list of 25 Southern California high school football players who excelled at the varsity level as freshmen in 2018. With the 2019 regular season wrapping up in a few weeks, it’s time to check in on those players’ progress and break down other class of 2022 sophomores who are having strong second seasons.

Based on statistics, playing time, observations and conversations with coaches, here are the Top 40 Southern California high school football players in the class of 2022. Players from all over the Southern Section and L.A. City Section are represented, including athletes in lower divisions. Those players truly needed to stand out to make the cut. The list is in alphabetical order.

Allain had a magnificent freshman season and is following it up with a strong sophomore year. He’s rushed for 900 yards and 15 touchdowns for 6-1 Norte Vista.

Nicknamed Buddha, Al-uqdah has made 51 tackles in 2019 for Narbonne, eight of which have been for loss. He holds a USC offer.

Arango-Serna andh Alemany’s Kevin Green were the top freshman wide receiver in Southern California in 2018. So far this season, Arango-Serna has 37 catches for 716 yards and seven touchdowns. All three marks either lead or are tied for the lead in the City Section.

Bass has tossed around City Section defensive linemen all season. Check the tape.

Boardingham has hauled in 27 passes for 392 yards and five touchdowns this season. He also has two sacks and two fumble recoveries.

Boyd has rushed for 351 yards and five touchdowns this season. He may be the top RB on this list.

Brus made 55 tackles for undefeated Glendora, ten have been for loss and three have been sacks.

The Mater Dei backfield is crowded, but Craig has made the most of his opportunities. He’s rushed for 233 yards and five touchdowns in 2019. Craig has also blocked two field goals on special teams and recovered three fumbles.

Joker Dickerson has three interceptions on defense and two blocked field goals on special teams. He also returns kicks and punts for Lompoc.

Duffy might be the top quarterback in the 2022 class from Southern California. He had a great year for Rancho Verde last season and is following it up with an even better sophomore season. Duffy is completing over 75% of his passes and has thrown for 1,874 yards and 20 TD’s in 2019.

Fifita is another top 2022 QB who Servite head coach Troy Thomas couldn’t speak more highly of. He’s thrown for 1,653 yards and 22 TD’s for the young Friars this season.

Fletcher has rushed for 649 yards and six TD’s in 2019 for a dark-horse Division 3 Cajon team.

Fox does a little bit of everything for Pasadena. He’s caught three touchdowns, runs for one more and has an interception so far this season.

Get ready for some crazy stats: 82 carries for 843 yards, averaging over ten yards per carry with 13 rushing TD’s. He also has 46 tackles on defense.

Garrison is averaging over five yards per carry in 2019. He’s rushed for a touchdown and caught another. He plays on defense and special teams for St. Francis too.

George has caught 30 balls for 467 yards and seven TD’s for undefeated La Serna.

This isn’t the first Alemany name in this list and it won’t be the last. Green has caught 37 passes for 475 yards and three touchdowns so far this season.

Greene isn’t only a Division 1 college prospect, he’ll eventually be an NFL prospect because of his 6-foot-5 300-pound frame.

Guerrero has piled up 728 rushing yards and 10 TD’s for undefeated Rio Hondo Prep in 2019.

Hunter has held his own in the Mater Dei secondary for the last two years. He has one interception in 2019 and has returned a punt for a TD.

Jackson might be the best player on this list. He’s the top 2022 recruit in California, per 247 Sports. Quarterbacks avoid throwing the ball to his man. He has one pick in 2019, which he returned for a score.

Nicknamed Speedy, Luke has rushed for 323 yards and five touchdowns in 2019. He’s also a sprinter on the Bosco track team.

McMillan is up there with Domani Jackson; he’s a top two player on this list. He’s caught 30 passes for 499 yards and five TD’s for Servite this season.

In Sierra Canyon’s win over Valencia earlier this season, Ramsey went out for one play because the referee saw something amiss with his uniform. Valencia scored their lone touchdown of the game on that play. That’s how important Ramsey is to Sierra Canyon’s defense.

Rotenberg has six interceptions through eight games for Brentwood.

Te’o has 44 tackles, three sacks and a caused fumble in his second year of high school football.

Terry leads the Southern Section in rushing with 1,611 yards through seven games. He’s also tied for the touchdown lead with 20.

Tuihalamaka has made 51 tackles for Alemany so far this season.

Turner-Gooden plays on both sides of the ball for a loaded Calabasas team. He’s caught 15 passes and has an interception in 2019.

Vaipulu started as a freshman on the Cen10 offensive line and has kept his spot in year two. He’ll be a four year starter when it’s all said and done.

Wagner is tied atop the City Section interception leaderboard with four picks.

Wallace has made 39 catches for 569 yards and three TD’s for Westlake.

Watkins ranks third in the City Section in both rushing yards and TD’s with 930 and 14 respectively.

Williams has caught 31 passes for 436 yards and two touchdowns for the nation’s top team.

Williams has snagged 39 passes for 694 yards and six TD’s so far this season for Etiwanda. He’s also rushed for two scores and intercepted three passes on defense.