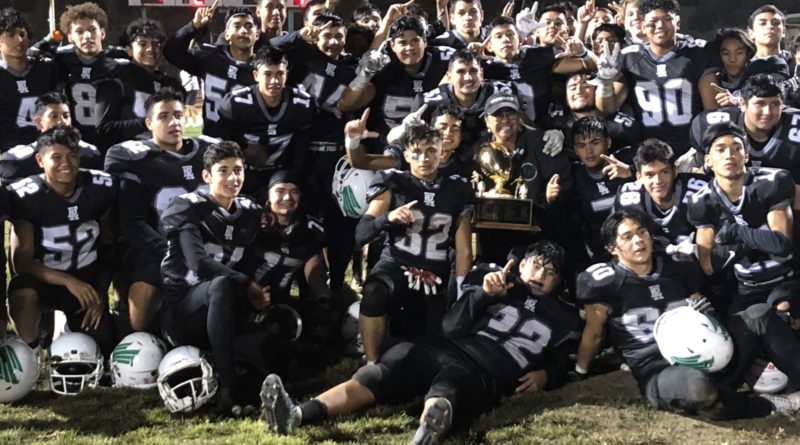 Eagle Rock quarterback Axel Ayers passed for two scores and rushed for two more in the victory. The Eagles moved to 5-3 with the win and 3-0 in league. Franklin dropped to 6-2 (1-2).

Eagle Rock head coach Andy Moran referred to quarterback Axel Ayers as a warrior after the game. In addition to his four touchdown contributions, Ayers led Eagle Rock’s seven minute game-killing drive in the fourth quarter and also played half of the Eagles’ defensive snaps in the secondary.

Daniel Zamora and Rio Ramos each rushed for touchdowns as well Friday.

Franklin led 14-7 with 5:01 left in the first quarter, but minutes later Ramos’ one-yard touchdown run tied the game. On the Eagles’ next drive, Ayers hit Zamora for a five yard TD and then Juan Hernandez kicked a 30-yard field goal on the following Eagle Rock possession to put the Eagles up 24-14. The kick came with 6:12 remaining in the first half.

The teams went score for score from there on out until Franklin kicked a field goal on its final possession making the score 45-38, which was the final.

Franklin QB Alfred Bobadilla threw four touchdowns and ran for a fifth on Friday. He tossed 74 and 53-yard touchdown bombs to Christopher Quijada before his five-yard second quarter rushing TD, which made the score 24-21 late in the half.

Bobadilla threw touchdowns of 27 and 32 yards to Eric Rolon in the second half. Every non-Quijada touchdown came with the Panthers trailing. Ultimately, Franklin couldn’t get a defensive stop in the fourth quarter.

“Ya it was frustrating, it wasn’t our night defensively, said Franklin head coach Narciso Diaz after the loss. “We needed to make some adjustments. They’ve got two good ball players in Axel Ayers and Daniel Zamora.”

Giving up 45 points on defense will frustrate most coaches, but it’s even more disheartening when one stop could have changed the game due to the offense picking up the slack. That’s what went down Friday and it will leave Franklin with a bad taste in its mouth.

Franklin kicked a short field goal with 7:04 to play that made the score 45-38 Eagle Rock. From there, Ayers and Zamora took turns running the ball for the Eagles until the team could eventually take a knee on the Franklin one yard line to end the game.

The defeat should lock Franklin into the number two seed in the City Section Division 2 playoffs assuming neither the Panthers or Canoga Park (the expected top seed) slip up the rest of the way.

The win will move Eagle Rock a few spots up in the CalPreps rankings, but it should’t lead to the Eagles leap-frogging Reseda into one of the eight Open Division spots. Eagle Rock will most likely make the D1 playoffs where they will contend for a championship.

Eagle Rock made the Open Division semifinals last season and graduated the majority of their difference makers so when the 2019 Eagles started 2-3, it looked like a potential rebuilding year.

The Eagles have won three straight and their head coach thinks they can put together a special season.

“This is a great group of kids, when are we going to stop underestimating them?” Moran asked Friday. “That’s what I want to know…It’s been this way all year…There’s no substitution for heart.”