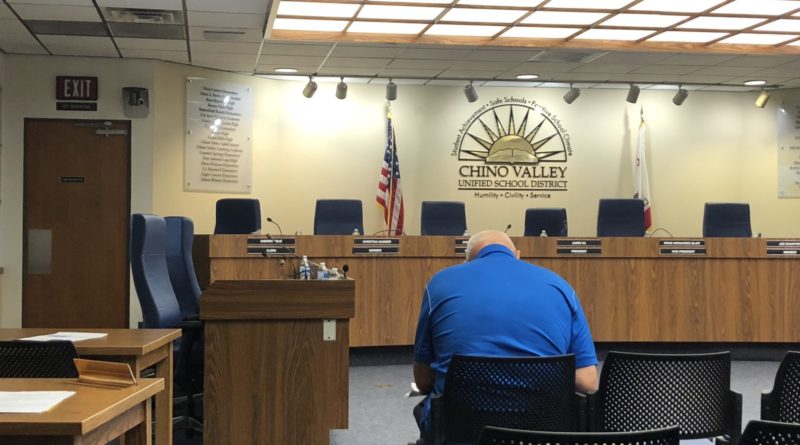 Stevens and athletic director Sam Sabbara resigned last week after allegations of “pranking” and “teasing” emerged involving freshmen football players, according to Imee Perius, who is the Director of Communications for the school district. Both Stevens and Sabbara are still employed by the district as teachers.

Stevens and Sabbara both offered their resignations, according to the district.

However, according to a source close to Stevens, the duo was told to “either resign or take a paid leave of absence while an investigation took place.” They both felt pressure to resign.

In total, 13 people stood in front of the board, with nine speaking. Chino Hills football team captain Nathan Kneubuhler spoke first in support of his former coach. All nine speakers requested that the board reinstate Stevens.

At the end of the meeting, District Clerk Andrew Cruz asked that at the next board meeting a vote to reinstate Stevens be put forth. That motion was met with applause from the remaining attendees.

However, when school board president James Na was asked about the board having the power to reinstate Stevens, he said it’s ultimately not their decision.

“[We can’t vote to reinstate] because the investigation is not done and there’s a resignation paper, so whoever accepted the resignation would have to get involved,” said Na.

Na did leave the door open for Stevens to return to the Chino Hills sideline.

“I’m a very positive person and I would love to see good people staying with our kids,” Na said. “…[Stevens] is really appreciated, especially by me.”

*This story was updated on Friday afternoon at 1:01 p.m. with additional information from a key source