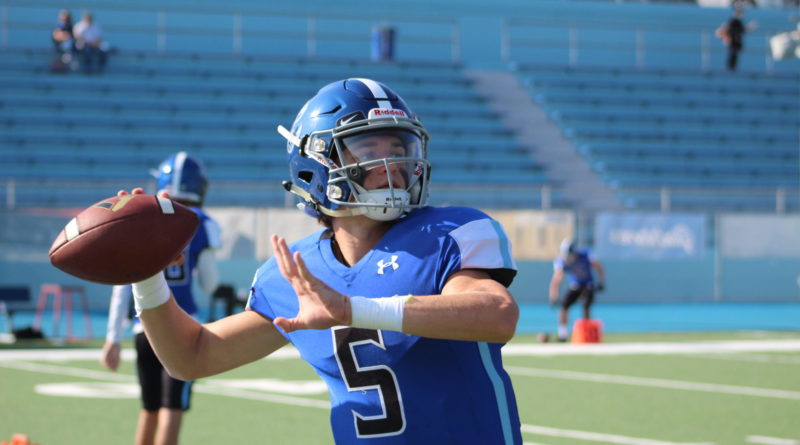 Every week, Scorebook Live California reporter Connor Morrissette writes a column highlighting the top performers and the most intriguing storylines in Southern California high school football. You can find his column archive here.

Due to poor air quality from the fires in the San Fernando Valley on Friday night, Palisades football hosted Venice this past Monday at 4 p.m. There were a few other rescheduled games Monday, but the Pali vs. Venice rivalry matchup was easily the game of the day and playing the game on Monday added to the spectacle.

I’m in favor of more varsity games being played on Monday’s in the future.

Writers from the Palisadian Post, LA Times and our site attended the game as well as a group of photographers. If the game were played on Friday, it would have received far less media attention. Monday kickoffs allow for smaller schools to get more media coverage when their game is the only one in town.

That makes it special too, being the only game in the area. It leads to more attention in general, never mind the media coverage. The Monday game is the only place to go to watch a local football game. There’s no competition from other high schools like there would be on Friday, or college games, like there would be on Saturday. There isn’t a whole lot to do most Monday nights. Why can’t a marquee high school game fill the void?

I understand the safety concerns with both Palisades and Venice now having to play on short rest Friday. Maybe Monday games could be played by teams in the future who are on the bye the next week or have a Saturday game. It might give athletic directors scheduling headaches, but there are some definite advantages to the Monday afternoon/night high school football game.

Hopefully in the future a few more of these can be scheduled instead of rescheduled due to wildfires or thunder and lightning.

Let’s get into the weekly breakdown…

Who should be Scorebook Live’s Southern California football player of the week?

Culver City’s 32-27 win over Lawndale came down to the last second on Friday. Here’s an excerpt from my colleague Lance Smith’s story from the game:

Trailing by five, Lawndale had the ball with a couple minutes left on the clock and worked its way towards Culver City’s end zone. In the waning seconds of the game, QB Jalon Daniels had to toss up numerous desperation attempts in the end zone that narrowly missed receivers. One of them was somewhat catchable and slipped through the hands of a Cardinal. A few of them would likely have been caught if not for pass interference penalties by the Centaurs’ DBs that extended the came and brought Lawndale closer to the end zone.

One of those pass interference penalties came as the clock expired. So Lawndale had one last untimed down with the clock already expired and the ball around the 10-yard line. With Daniels having almost no choice but to go for a desperation heave, Culver City made yet another stop in the end zone and the game ended.

San Pedro senior running back Josh Ward is one of the favorites for Player of the Year award honors at the end of the season in the City Section. He showed why again on Friday in San Pedro’s 41-16 win over Banning. Ward scored four touchdowns including this 60-yard run:

Only Narbonne has been able to limit Ward so far this year. What will he have up his sleeve this week against Sierra Canyon?

St. Francis very well could have agreed to a no-contest with Paraclete on Friday because of the Saddleridge Fires. Instead, St. Francis drove three and a half hours around the fires to play the game and allow Paraclete to have its homecoming. Paraclete won the game 38-33.

“When you talk about classy kids, coaches and administration, the bar has to be set by the good folks at St Francis. As you know, the fires this weekend wreaked havoc on most of the high school sports schedules. As luck would have it, we had our homecoming game scheduled for this Friday. Also as you know, two of our last three homecoming games have been forfeited, which certainly makes it tougher to have a homecoming celebration, homecoming queen or homecoming gathering. With the fires, it was a very difficult task to get [to Palmdale]. What usually would be an hour and a half drive became a three to four hour (they wouldn’t tell me how long it took) drive going down the 210 to the 15 to the 138, all which were tremendously backed up because of the fires.

“They knew it was coming, but as soon as we told them it was our homecoming, there was no way they were NOT coming. They withstood the long drive, they handled it was class and refused to use it as an excuse, knowing it was an important Division 3 game and that they were putting themselves at a disadvantage sitting on the bus for four hours. Jimmy Bonds, Tom Moran and the good young men at St Francis deserve a shout out for ensuring our school got to have a homecoming game this year.

“I realize this is nothing heroic or spectacular, just another example of good people doing the right things for the right reasons, and they deserve to be recognized.”

Casey had been committed to Fresno State since June of 2018.