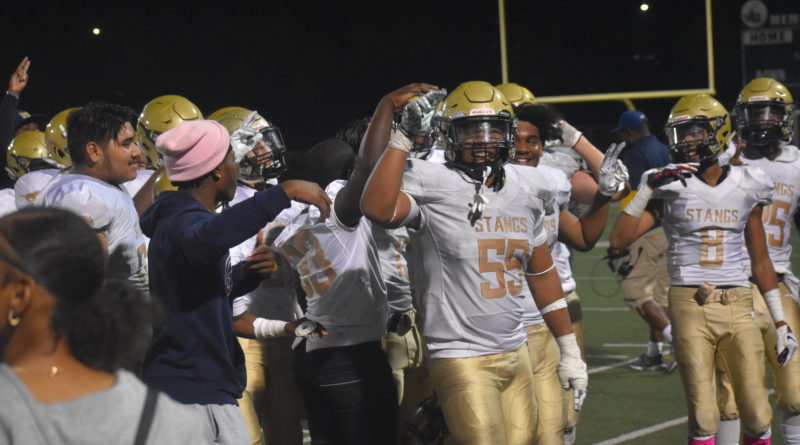 BURBANK – In an unusual instance of Monday night high school football, Muir took down rival Burbank, 20-15. The game was initially scheduled for last Friday, but was postponed due to the Saddleridge fire. Here are five takeaways from the game.

I’ve never seen a football game with so many penalties, ever. Not from two sides collectively, nor from one specific side (Muir). A lot of them were offsetting. There were a lot of holding calls, especially going against the Mustangs, which caused what felt like countless first downs and big plays to be recalled. Both teams went off sides and had false starts. And there were a lot of unsportsmanlike conduct calls because the two sides were really going at it, with nonstop trash talk.

Additionally, the game was fairly slow-paced so the penalties seemed to be even more frequent than they were.

That said, both teams brought a lot of energy, and sometimes that correlates with lots of penalties. Muir’s defense in particular was extremely energetic, and Burbank brought phenomenal energy all-around in the second half that nearly resulted in a last-minute comeback.

The game ball goes to Muir’s defense. Not only because they were effective at containing Burbank all night, but also because their energy was contagious, particularly the front seven. DT Carlos Ramirez, Muir’s leader in sacks this season, was at the head of a lot of it, in addition to playing offensive line and on special teams. Kamar Watkins, Asa Roberson, and Jamier Johnson also were excellent. Johnson had an interception.

Even though a talented Muir squad didn’t have one of their best games of the season, it took a strong energetic effort by Burbank to hang around until the very end. In relief for an injured Rambo Araradian, QB Kuba Raymond had a key rushing touchdown to keep the game alive in the fourth quarter.

Burbank fought hard all around to hold the Mustangs to 20 points. DE Devin Housholder was disruptive to the Mustangs all night. DL Craig Rushton played big as well. LB Max Mendieta had a strong effort capped off with a sack in the endzone to force a safety in the fourth. CB Ian Miller, who had an interception, led a strong effort by the Bulldogs’ secondary. Additionally, Freddy Cardenas had two stellar punts that landed just barely outside of Muir’s end zone.

It looked like it was over when Muir forced a turnover on downs up 20-9 with 6:11 left. Then Miller ran his interception about 35 yards, all the way to Muir’s two-yard line. Raymond scored, and the Bulldogs forced Muir to punt before much time went by. Eventually they got the ball back down five, but Muir held them and forced a turnover on downs with about a minute left.

It’s that time of season, right in the heat of league play, that guys everywhere are getting injured, and choosing to play through it. This game was no different. As has been the case with a lot of games in the past week or two, both squads were dealing with injuries to a lot of key players both coming into and during the game.

For Burbank, Araradian took a hard fall to his shoulder region in the second quarter, and despite trying to fight through intense pain, was unable to return. DB Vincent Vang fought through what appeared to be a combination of leg cramps and possibly a strain or pull, only to eventually have to pull the plug. Multiple linemen were playing through limps.

For Muir, Watkins was fighting through some hand injury. Harrison was down in the second quarter for a good few minutes after a rough fall, but didn’t exit the game. The Mustangs also had a couple linemen limping around and choosing to stay in the game.

“Even when everything that could go wrong went wrong, we never stopped playing hard,” Coach Zaire Calvin told his Mustangs after the game. “We can only beat ourselves, but they didn’t beat us, and a win is a win.”

Ramirez talked to Scorebook Live after the game.

On the front seven, he said, “We know each other personally a lot, we hang for these last three years. We’ve been playing since Pop Warner; everybody has their part or role in the defense. And if somebody makes a play, we get hyped up for them. And it goes on from there–we’re not selfish.”

Muir looks to be the clear-cut favorite to win Division 11 right now, and even on an off night, they looked more like a Division 5 team than a Division 11 team. I asked him if they’ve already started looking forward to the CIF Southern Section Division 11 playoffs.

“League is so important to us, and we haven’t won the Pacific League in so long, and that’s one of our goals this year,” Ramirez said. “After we win that, we will talk about the other Division 11 opponents.”

Because of the postponement, Muir is going to play Arcadia in just four days, on Friday. Ramirez told us he’s not overly worried about struggling to recover in time.

“We love football. It doesn’t matter if we could play everyday, we love it. We bring a lot of energy to practice, and in practice it feels just like a game,” Ramirez said.