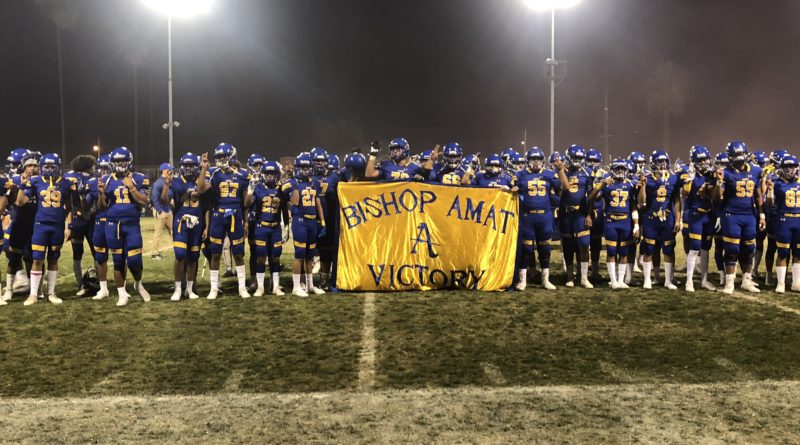 LA PUENTE — Damien Moore continued to make his case for Mission League MVP Saturday night in Bishop Amat’s 31-21 home win over Chaminade. The senior rushed for 214 yards and three touchdowns. Amat moved to 6-1 with the win. Chaminade fell to 3-4. Below are five takeaways.

What else needs to be said about Damien Moore? Week in and week out he produces and tonight was no different. The senior converted multiple third downs on the ground and was a challenge to bring down all night. He sets the tone for the Lancers on offense. Right now, there isn’t a more valuable player in the Mission League.

Moore scored touchdowns in the second, third and fourth quarters on Saturday. His first came from seven yards out and put Bishop Amat ahead 10-7 with 4:52 to play in the first half. His second was from three yards away and came on the first drive of the third quarter. The Lancers led 17-7 after that score. Moore’s rushed for his final TD at the 7:29 mark in the fourth quarter. The one-yard plunge made the score 31-14 Amat.

Bishop Amat senior AJ Souza blocked two Chaminade punts in the game. Elijah Ponder picked up the second block and returned it for a touchdown in the third quarter, which extended the Lancer lead to 24-7.

Chaminade quarterback Jaylen Henderson threw two touchdowns in the defeat. One of the scores went to William Camacho on a 34-yard pass at the end of the third quarter. Camacho also rushed for a touchdown earlier in the game. Daluan Bright intercepted a Nathan Castro pass for the Eagles when Amat attempted a trick play in the first quarter. Chaminade linebacker Bryce Mack made 13 tackles.

“This [win] goes to my o-lineman,” Moore said after the victory.”They fought. We’ve got a lot of newcomers that didn’t play last year, they’re stepping up.”

Bishop Amat has come a long way since losing to JSerra 38-14 on September 6th. Like Moore alluded to, the offensive line has made great strides in that time and Moore’s performances have spoken for themselves. Head coach Steve Hagerty and his staff deserve a lot of credit.

Moore’s one-yard TD run with 7:29 to play in the fourth quarter put Amat ahead 31-14. Even though Chaminade did go on to score another touchdown in the game, that Moore TD put the game out of reach.

AMAT STAYS IN CONTROL OF THE MISSION LEAGUE

Tonight’s win moved Bishop Amat to 2-0 in the Mission League. The Lancers remain in the driver’s seat following last week’s 25-24 win over Alemany and this evening’s victory. With Serra’s injury crisis and Loyola’s inexperience, Notre Dame looks like the only team left that will challenge for the league title. Bishop Amat plays Notre Dame at home on October 25th.

AMAT GETS AN A+ FOR SPECIAL TEAMS

In addition to Souza’s two blocked punts, Lancer kicker Adrian Ochoa made a 41-yard field goal to open the scoring in the game and also had multiple touchbacks on kickoffs.