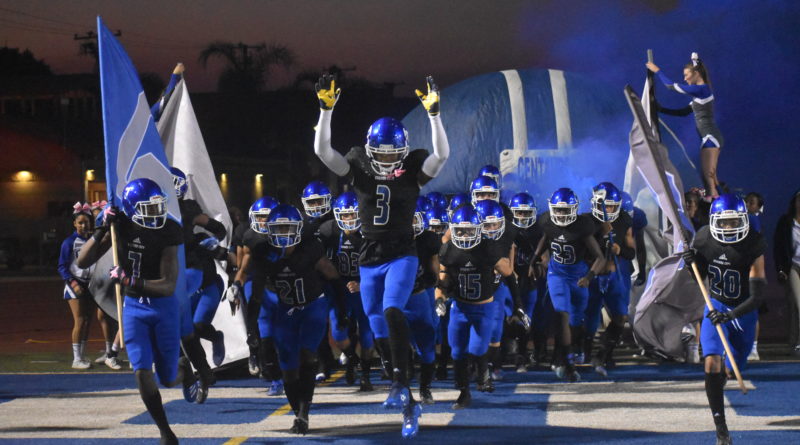 CULVER CITY – In a back-and-forth battle played in smoky conditions, Culver City knocked off reigning Division 3 and 2-A state champion Lawndale 32-27 Friday night. The Centaurs moved to 7-0 and effectively clinched an Ocean League title in dramatic fashion. Here are five takeaways from their thrilling victory:

With the fire in Sylmar a little over 20 miles north of Culver City causing dozens of games to be canceled or postponed, the air was fairly smoky all night. Weather.com’s AQI (air quality index) read close to 200 at times during the evening, when 150 is the maximum reading before people are officially told to stay indoors. Coughing and labored breathing from the game and the sidelines was abundant.

In particular, a thick patch of smoke came in during the second half that slightly clouded the visibility of the playing field and raised the temperature substantially at the stadium.

This one came down to the last second – and then some. Trailing by five, Lawndale had the ball with a couple minutes left on the clock and worked its way towards Culver City’s end zone. In the waning seconds of the game, QB Jalon Daniels had to toss up numerous desperation attempts in the end zone that narrowly missed receivers. One of them was somewhat catchable and slipped through the hands of a Cardinal. A few of them would likely have been caught if not for pass interference penalties by the Centaurs’ DBs that extended the came and brought Lawndale closer to the end zone.

One of those pass interference penalties came as the clock expired. So Lawndale had one last untimed down with the clock already expired and the ball around the 10-yard line. With Daniels having almost no choice but to go for a desperation heave, Culver City made yet another stop in the end zone.

This game was loaded with strong performances on both sides.

The Centaurs’ offensive and defensive lines both did an outstanding job giving their backs a chance against a bigger and more athletic Lawndale squad on both sides. It was an all-around effort in every sense, with every player on both sides of the ball executing and fighting hard to get it done–anything less, and Lawndale only would’ve needed one mistake to win. Defensively, Pait, Miller, LB Isaiah Williams, and DL David Naranjo and Blake Kneebone were among the biggest contributors.

Jadon Daniels led the Cardinals with a passing touchdown to Jeff Trepagnier and two rushing touchdowns. Ma’Kai Williams was excellent running the ball, including a rushing touchdown, and had a highlight interception at DB. Roland Fullwood was among a few Lawndale offensive linemen who helped clear space for the Cardinals’ confusing wishbone offense. Lawndale’s front seven did a good job applying pressure for much of the night, led by DE Tuli Tuipulotu.

“Is anybody satisfied?” Coach Wright asked his team after the game.

He was met with a resounding “no.” Wright told his team that he was proud of them and that they deserve to celebrate the victory, but implored them to remember that this is just one step towards bigger goals.

Eckhaus told Scorebook Live that as great as this win was, the aspirations are higher yet for the next two seasons.

“This feels great, it feels amazing to be 7-0, but at the same time, we want to cap it off with a ring at the end of the season…I want to win a state championship.”

While the Centaurs have been the clear second alpha dog behind Lawndale in the Ocean League for years under Jahmal Wright, but the past two seasons of Culver City football have been on another level.

Culver City has gone from the Division 11 semifinals in 2017, to winning Division 7 in 2018, to knocking off reigning Division 3 and 2-A state champion Lawndale in 2019. Last season, Culver City’s only losses before losing in the state championship semifinals were to Palos Verdes and Lawndale. This season, they’ve knocked off both. And barring a massive collapse down the stretch of the season, they will finally be on top in the Ocean League.

Believe it or not, plenty of their core, including Eckhaus, consists of players with one or two years left in high school. The Centaurs, who are heavily favored to win Division 5, will likely be a playoff team in Division 4 or 3 next season. Their ascent might not have any end in sight.