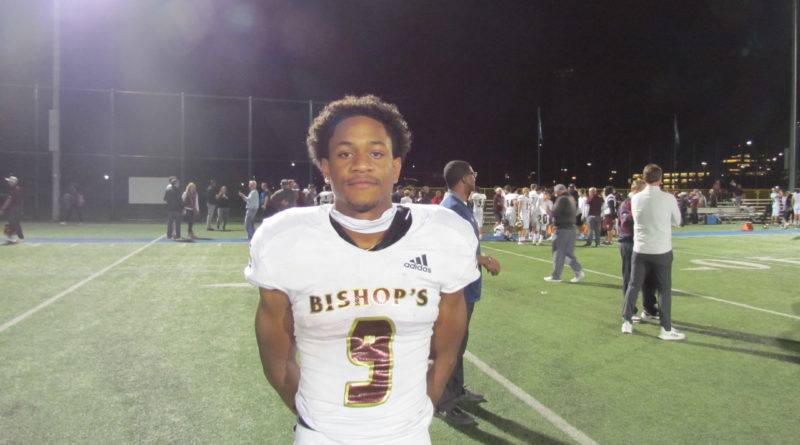 Notre Dame commit Tyler Buchner was his usual self on Friday night, dishing out passes to several receivers and showing off his dual-threat ability to pick up chunks of yards on the ground. Buchner threw for five touchdown passes and ran for two more in only three quarters of action. He finished 26 of 31 for 300 yards.

Senior running back Amaan Banks showed off his defensive abilities on Friday recovering a fumble and returning it for a touchdown and grabbing a 3rd quarter interception in the end zone.

Davidson commit Clarence Freeman made plays on both sides of the ball and grabbed his 7th and 8th touchdown receptions of the season from Buchner during their dominant 1st half.

The two private schools in La Jolla have had a good rivalry over the years, but it’s been dominated by the Knights since 2012.

Bishop’s 54-6 halftime lead showed exactly what they were made of.

With 9:36 remaining in the 1st quarter and already holding a 16-0 lead, Bishop’s was able to execute and recover a 2nd consecutive squibb kick.

“Every day in practice we go over it, our kicker Alonso (Garcia), he’s great. Normally a soccer player but he came out this year as a senior and decided to play and he’s been a huge asset,” Petry said.

The Knights drove down again with Tyler Buchner and Clay Petry connecting across the middle on a 4-yard touchdown completion to give Bishop’s a 24-0 lead just barely over 4 minutes into the contest.

Friday night marked the 6th straight game that the Knights were able to eclipse the 53-point mark.

“I think our offense comes in every single week like we want to score every single drive and if we don’t then we failed, that’s our mentality no matter who we play,” Buchner said. “We changed our protection scheme after the La Jolla HS game and it’s been working really well, I have tons of time.”

La Jolla Country Day’s prolific offense came in averaging 44.5 points per game but were only able to manage 14 on Friday night with 8 of those coming in the last minute against the Knight’s reserves.

“All week we just worried about coverage, they’re a really pass dominant team so we focused on that all week, 7-on-7 in practice and just knowing our assignments,” Banks said.

Banks made the play of the night late in the 1st quarter when several Knights were able to strip the ball from the Torrey ball carrier to force a turnover. Banks picked it up and ran 89 to extend the Bishop’s lead.

“We don’t stop until we hear the whistle. I saw the ball pop out and it was nothing but excitement, I just picked it up and went to the end zone,” Banks said.