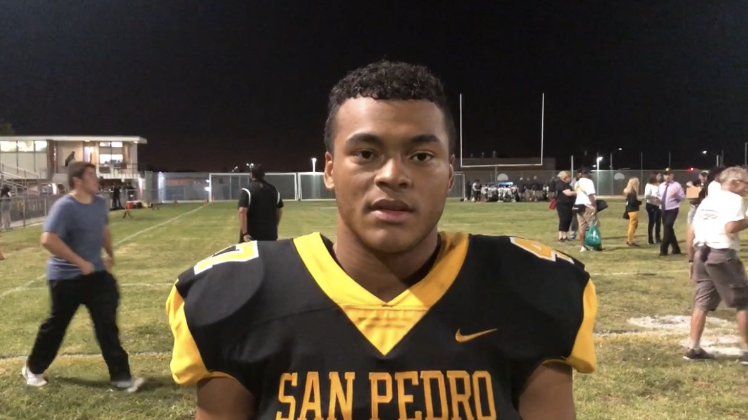 WILMINGTON — San Pedro senior running back Josh Ward rushed for three touchdowns and caught one more in a 41-16 demolition of Marine League rival Banning Friday night. San Pedro moved to 6-1 with the win, Banning fell to 3-4. Below are five takeaways.

In addition to Ward’s four scores, he made double digit tackles on defense. At the end of the game, Ward looked like a prize fighter with a bandage over his left eye and scratches on his face. He truly left it all on the field.

“He’s a special kid,” San Pedro head coach Corey Walsh said of Ward after the victory. “Anytime he touches the ball, he’s got that magic that he can take it to the house at any time…For a guy to play up in the box at linebacker and get as many carries as he does and play on kick off team, they don’t make them like that much anymore.”

Ward’s first touchdown run went for 36 yards and put San Pedro ahead 7-3 in the first quarter. He then punched in a two-yard TD in the second quarter to extend the Pirates’ lead to 13-3.

On San Pedro’s first possession of the second half, Ward broke the game open on a 60-yard touchdown scamper. Just like that, the Pirates led 20-3. He caught a 16 yard touchdown later in the quarter.

Jahmar Brown and Richie Sanchez each intercepted Banning quarterback Jake Otto in the game. Sanchez returned his for a touchdown at the end of the third quarter.

Otto rushed for two TD’s in the defeat.

Ward’s 60-yard TD run at the beginning of the third quarter effectively ended the game. Banning lost their top player in sophomore running back Jakob Galloway on their first offensive series. After Ward’s run a Pilot comeback was a long shot, especially without Galloway. More on his loss later.

On paper, this game was a battle for second place in the Marine League and San Pedro won easily. The Pirates still have to play Carson, but the Colts are 1-6. Assuming San Pedro can take care of business the rest of the way, they should be the #2 or #1 (if Narbonne is banned) Open Division playoff team in the City.

Banning still has some work to do. Their win over Westchester isn’t as strong after the Comets fell to Fairfax Friday. A loss to Carson next week and and Banning could fall into the D1 playoffs.

Galloway went down with an ankle injury on Banning’s first offensive series and did not return. Pilot head coach Raymond Grajeda said it was mostly a precaution for the sophomore and that he should be ready for next week’s game. Either way it was a huge loss. On offense, Banning didn’t look right after his exit.