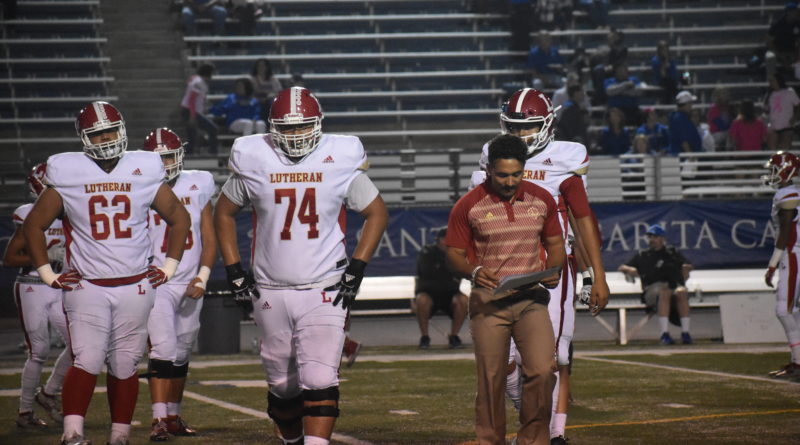 MISSION VIEJO – Orange Lutheran defeated Santa Margarita 28-14 in a Trinity League matchup that came down to the final quarter Thursday night. Santa Margarita lost by two touchdowns, but fought all game to nearly come back from a 14-0 deficit. Here are five takeaways from the game.

Football is often a game of momentum, and Thursday night was no exception.

Orange Lutheran jumped out to a 14-0 lead in the first eight minutes of the game after WR Malik Blackmon and FB/MLB Jonah Laban scored on short screen passes. Coming out of the gate, OLu had a lot of energy, starting with great work by their offensive line, and Santa Margarita was slightly flat. It looked like a blowout was on its way.

Then the Eagles’ excellent defense clamped down significantly. After a few solid drives just barely failed to amount to points, they got on the board near the end of the first half on a rushing touchdown by Malakai Edwards. Colt Fulton converted for two points on a QB sneak to cut the lead to 14-8.

They continued to reverse control of the momentum throughout the scoreless third quarter, starting with a fumble recovered by DT Tyler Hartigan as the second half started. By the middle of the fourth quarter, the Eagles had the ball and a first down with only about two yards to go. A touchdown and PAT would have put them ahead late in the fourth quarter.

But Orange Lutheran did an outstanding job locking down the red zone when it mattered most. Four times the Eagles ran the ball as they had done successfully for much of the night, mostly inside handoffs near or through the middle, and four times, the Lancers denied them.

That instigated another major momentum swing. Almost immediately, RB Cooper Vander Hill broke free for a very long rushing touchdown, giving OLu a 21-8 lead with 4:28 left. And on Santa Margarita’s next set of downs, Laban returned a fumble for a touchdown to make it 28-8.

Laban’s second touchdown almost sealed the game. Santa Margarita actually scored a quick touchdown after a short kickoff to make it 28-14, and kicker Connor Teasley then recovered his own onside kick. But Lancers CB RJ Regan immediately put any chances of a radical comeback to rest with an interception.

Jonah Laban was our player of the game for his two touchdowns and big role in holding Santa Margarita to 14 points. That said, the Lancers were solid across the board.

Their offensive line played a huge part in all three offensive touchdowns, and was downright dominant when they got out to their early lead. QB Logan Gonzalez and RB Cooper Vander Hill both finished with a touchdown and steady work on all the drives. On defense, the Lancers were led by Laban, Regan, DT Wesley Uipi, and LB Tayber Tomanek, among others.

For Santa Margarita, QB Colt Fulton didn’t put up big numbers, but he finished with a passing touchdown and was a steadying presence many times when the Eagles needed one. Malakai Edwards was a workhorse at RB and finished with a rushing TD. OL Jason Schillig had key blocks on Santa Margarita’s scoring plays.

DE Derek Wilkins was excellent. He forced a fumble, had numerous tackles for loss, and disrupted OLu’s offense with his edge rushing. The Eagles also got big contributions on defense from Hartigan, Edwards (FS), LB Greg Doyle, and DB Mitch Messier.

Both players had numerous players toughing out some injuries, and doing so surprisingly effectively. Laban was down for a while with a tweaked ankle in the third quarter, and eventually proceeded to lead the Lancers to pulling away with the victory. Wilkins also came up hobbling early in the first half, and despite limping for the rest of the game, he was no less dominant.

Those weren’t the only examples on either team, but the toughness of both stars stood out the most. Not just the toughness to continue, but that both were still arguably the two best players in the game afterwards without missing a beat. It was inspiring.

“After I got a little bit banged up on the field, I came out, and I told the trainers, ‘please tape my ankle up as fast as you can so I can get back out there,’” Laban told Scorebook Live after the game.

“Every game coach tells us, you got to have that fire. Every play. Make them feel that you’re there. We knew we had to come out with a lot of energy. We knew that they’re a good team. In this league, every week is a struggle. You got to just come out with your best.”