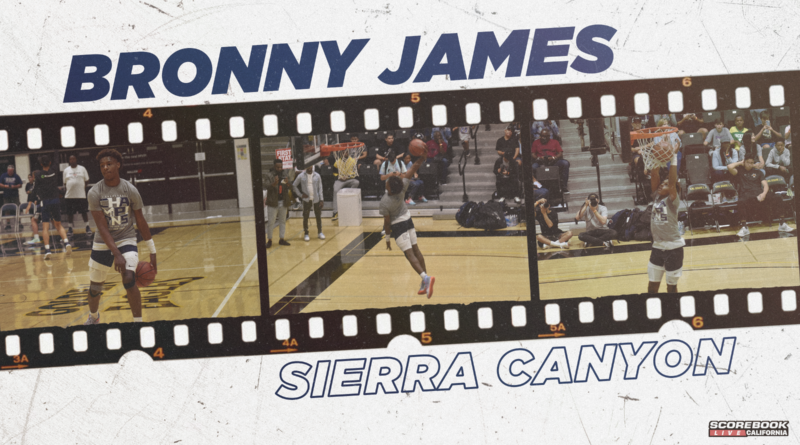 It’s no secret that running up box scores and creating highlights is more popular than ever for big names early in their hoops careers. But James, who currently comes off the bench for the ridiculously stacked Trailblazers, was refreshingly focused on doing all the little things, most of which don’t show up in the box score.

It’s early, but it’s clear that James has both an understanding and dedication to playing the right way, and to contributing to winning basketball. He’s at the beginning of his freshman year and has immense skill development ahead of him, but there were some very encouraging signs immediately that bode well for his potential as a future college and professional player.

Unsurprisingly, James is already developing the athleticism necessary to stand out at the highest levels of basketball, so from a physical standpoint, his upside doesn’t have much limitation. A lot of his highlights online speak for themselves. In person, it was clear that he’s the complete package physically. Not only is his explosiveness where it needs to be for his age, but he also has both a naturally strong frame, and excellent agility and lateral quickness.

He’ll probably never be as big as LeBron in terms of height or build. But he still is likely to top out at 6-4 or taller — and my guess is the latter. He also will very likely be well above average in strength for a guard by the time he’s fully grown, as he has the frame to excel athletically with significant added strength. Bronny projects to be a 6-foot-5 guard with solid length, great lean strength, and excellent athleticism, which would make him a prototypical physical specimen to play multiple perimeter positions in D-1 and pro basketball.

James’ on-ball defense was outstanding, and it has a high likelihood of translating at higher levels. Spending a lot of time matched up on Benny Gealer — one of Rolling Hills Prep’s best players and a potential D-1 point guard — he made a point of taking pride in making life extremely difficult for Gealer, and disrupting RHP’s offense.

James’ wasn’t exorbitantly trying to force turnovers, which often creates an illusion that a player with an athletic advantage is a dominant defender when they won’t be against all levels of competition. Instead, James spent nearly every second in a strong defensive stance at his hip, without depending on his hands to keep his man in check. He did have four fouls, but there can be a lot of value in role players using their fouls, and James’ were mostly not silly, unnecessary fouls.

Furthermore, his defensive instincts as far as staying between his man and the hoop were superb. His ability to slide his feet while staying on balance was excellent and seemed effortless. It was a small sample size, but he seemed fine fighting around screens and not getting lost off the ball. It’s not a stretch to say that if he keeps growing, there’s a very good chance that he could one day be an asset as an on-ball defender in the NBA at not just one, but two or three positions.

While his floor game was fairly nondescript — zero points, two or three assists at most — there was a surprising amount to like from his run.

Against elite competition over the past few years, James has shown a variety of skills and areas of promise offensively. He hits threes, shakes guys off the dribble, finishes in traffic, and makes plays for others. With all that in mind, I’m only going to talk about what I saw, as a substantially larger sample size would be necessary to start projecting his upside on the offensive side of the ball.

James only took a few shots, and it was refreshing that he wasn’t looking for his shot when he didn’t need to given the talent he’s playing with. And his one or two missed jumpers didn’t look ugly or broken.

Whatever height he tops out at, it seems like James might be at his best in a playmaking role. He made a nice pocket pass on a pick-and-roll where he stalled and looked off both defenders to create an opening, and then slipped the ball to the roller in traffic right on the money. He had a nice lob assist in transition on a 2-on-1 with great timing — it wasn’t just a highlight, but it was the best play he could’ve made given the angles. He didn’t show advanced handles on Saturday, but he was steady.

The concept of having almost no wasted movement goes under the radar when scouting high school players or players early in their college careers, and he had very little. Noticeably little. There was just one instance where he started trying to shake a guy off the dribble, didn’t get anything going, and passed the ball before he was in too deep. So he burned five or six seconds off the clock trying to isolate, which happens sometimes, and then he made the right call getting it out in plenty of time to run a set. Overall, his understanding of being efficient in time and movement on offense shows a basketball IQ mature beyond his years.

Regardless of what he’s shown he’s capable of in videos, he will need to work on his scoring skills and his handles, just like any other high school freshman. But with his athleticism, feel for the game, and distributing prowess as someone just starting high school, he is on a good trajectory to eventually be a complete and versatile guard at high levels of competition.

Right now, Bronny looks poised to make a strong impact for a national contender in Sierra Canyon as a glue guy off the bench. And he’s shown substantial offensive upside with the ball in his hands in the past that the Trailblazers don’t necessarily need to tap into in order to win games. The guy is playing behind BJ Boston Jr. and Amari Bailey. That speaks for itself.

Bronny seems to be in a perfect situation at Sierra Canyon for his development, because his strong intangibles can be embraced while he works on making his ball skills more advanced and consistent at his own pace. It seems that he’s an advanced distributor right off the bat — a pass-first player like his old man — and he’ll be surrounded by 5-star talent for years to come.

If he grows past the height of a point guard, his defensive upside figures to be the first thing to put professional scouts on notice. And with his physical and mental gifts for the game, showing that he has advanced ball skills that he can implement on a consistent basis would instantly make him a complete player with the sky as the limit.