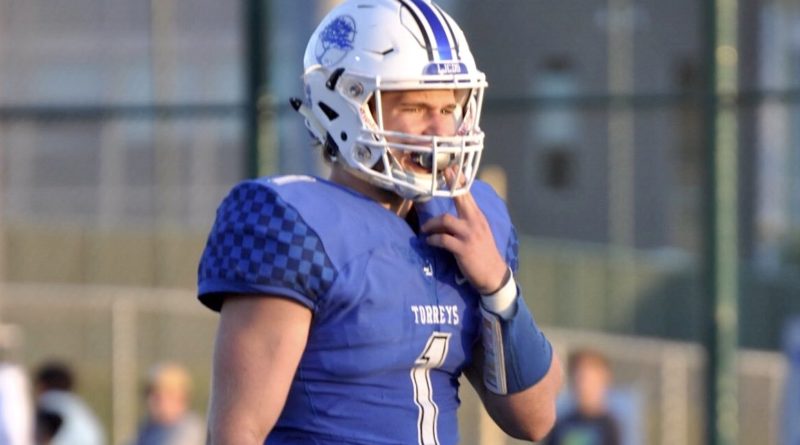 Despite his small stature at 5’7”, Allen-Pompey is on his way to posting one the best seasons by a receiver in San Diego History. Through six games he’s brought in 53 catches for 1,104 yards and 12 touchdowns.

Averaging 8.6 yards per carry this season, Flores recently went over 2,000 career yards to go along with 26 touchdowns. He’s helped the Panthers offensive attack score 46 points or more in 5 of six games.

He’s totaled 41 tackles and 5 interceptions so far for the Saints defense that’s allowing 9 points per game and has college recruits all over the field.

119 tackles and 5 forced fumbles as a junior for the Wolverines. At 6’6” Greer is one of the biggest disruptors in San Diego.

After a solid junior season, Kreutzmann has jumped onto the scene with huge passing numbers though six games. He’s throwing for 424 yards per game and has a TD/INT ratio of 7:1. Kreutzmann has committed to play baseball at Columbia.

Osuna is in his 3rd season as the Spartans quarterback. He’s led them to a 26-5 record during that time while accounting for 68 total touchdowns.

During his junior season he totaled 3,058 all-purpose yards and 32 touchdowns while finishing the season with an appearance in the D6-A State Title. Through six games this season he’s run for 1,309 yards and 16 touchdowns with 5 more touchdowns through the air.

Playing both sides of the ball for the Broncos, Williams has caught 29 passes for 422 yards and 3 touchdowns while also collecting 5 interceptions as Rancho Bernardo has won 4 straight games.