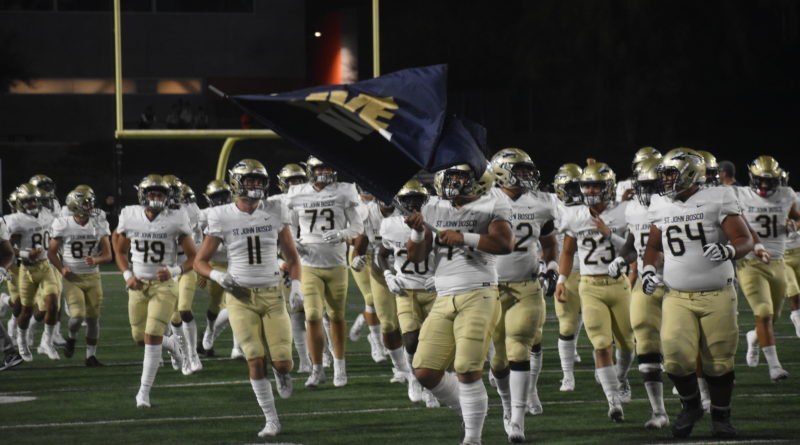 Last week was the beginning of league play for most CIF Southern Section high school football teams. What some expected to be a relatively dry week with tons of blowouts actually featured numerous unexpectedly close games and major upsets, with potential playoff and league championship implications through all the divisions.

This week, we might have the best slate of league matchups of the season. In several high-caliber leagues, games between evenly-matched foes this week are likely to determine the eventual champions. Many of the upsets from last week have made Week 7 exponentially more exciting and relevant than it looked a couple of weeks ago.

Here are our Top 10 Southern Section games to watch in Week 7:

Not only are Pacifica and Oxnard rivals, but also, whoever wins this game is almost assured of winning league. Oxnard lost by one point a couple weeks to Camarillo a few weeks ago, and has since picked up great wins over Chaminade and Ventura. Otherwise, neither of these teams have lost.

Oxnard is the clear favorite, but Pacifica has more than fighting chance to win the game, and league. For the competitive Pacific View League, this figures to be the game of the year. And that’s only tenth on our countdown.

The dynamics of this matchup are almost identical to the context of the last game. At 4-2, Edison has been as strong as hoped this year. Their only losses have been close ones to Orange Lutheran and San Clemente. And unbeaten Corona del Mar has not been tested yet. These are the two clear-cut top teams in the Sunset League, and it’s extremely unlikely that either team loses for the rest of the regular season.

Edison could absolutely pull off the upset, but the odds are stacked against them. CdM realistically isn’t going to lose to anyone else in the league. But if Edison can shock them, the league title is essentially theirs.

Loyola has abruptly thrust itself into contention in the Mission League after beating Serra with room to spare. Serra is missing some key players right now, but that was still a major statement win. Alemany, who arguably looked the strongest in the preseason, lost by one point in devastating fashion to Bishop Amat last week. But the Warriors are still more than capable of winning out in league play and possibly winning the thing.

If Loyola wins, the Mission League may suddenly be flipped on its head, especially with Chaminade beating Notre Dame by three touchdowns. And if Alemany loses, they have almost no chance of winning league. This is the perfect time for Loyola to pull off the upset, but Alemany won’t concede an inch.

The Trinity League is nuts. While they certainly could beat other teams in the coming weeks, both Orange Lutheran and Santa Margarita are at risk of losing out for the rest of league play after this game, and both know it.

Santa Margarita’s outstanding defense is up to Trinity League standards. They held JSerra to only one score in the first half last week before the stacked Lions went on a second-half run. They have a great chance to win a low-scoring affair here, but Orange Lutheran has quite a bit more offensive firepower and is definitely the favorite.

Bishop Amat essentially has to win this game to potentially win league, but if they do, their Mission League title chances are alive and well.

Murrieta Valley was looking like the Southwestern League favorite after an unbeaten preseason that included an exciting win over Oaks Christian. Then Chaparral, who was not considered much of a league contender, came along and beat them 30-27. Now it seems fair to say that Chaparral and Vista Murrieta are evenly matched, and if Chaparral wins, they’ve essentially won league.

Expect a close game where both teams know how much is on the line. Chaparral hasn’t gone .500 in league play or sniffed title contention in more than a few years, and for them to more or less clinch it in the first two weeks of the season would be newsworthy.

Coming into league play, Serra and Notre Dame both had the resume of Mission League favorites, along with Alemany and Bishop Amat. Three of Notre Dame’s first four games were all convincing victories, and their only loss came narrowly the previous week to Servite. Serra was in similar shape. They had only lost narrowly to Narbonne, and had four wins that included Calabasas, Long Beach Poly, and Cathedral.

Then, both teams got upset by multiple scores last week. Missing their star power at QB, Serra lost 24-7 to Loyola, and Chaminade rolled Notre Dame 35-14. Both squads are still in contention for a Mission League title, but they probably have to win out from here. A lot is on the line for a couple great but banged up squads in this one.

This week’s action continues to be very rich in storylines. In one year, Culver City could go from being in Division 7 to knocking off reigning Division 2-A state champion Lawndale to win the Ocean League. In fact, the way they’ve played so far this season (6-0), they might even be favored to do so. And if the first week of league play was any indication (it is), neither of these teams could feasibly lose any other games in league this season.

If nothing else, tune in to watch Culver City QB Zevi Eckhaus. The junior has been putting up comical stat lines all season long. Through the first five games of the season, he had 2,025 passing yards, 29 passing touchdowns, and four rushing touchdowns on 70.9% completion and only three picks. The Centaurs dropped 47 on Santa Monica last week to become 6-0, and he surely tacked on to his ridiculous season numbers.

Would this game have been so high on the list before last week? Definitely not. Mater Dei is the best team in the country, and almost nobody can challenge them. That much was never in question. But last week Servite took St. John Bosco down to the last minute, with multiple opportunities to win the game.

Servite is one of the better teams in the country without question, but after last week, they’ve entered the tier of teams who can beat literally anyone if they bring their A-game. And after nearly completing last week’s second-half surge to become the first team all season to test Bosco, they should be perfectly primed to give Mater Dei a run for their money if the Monarchs aren’t in tip-top shape themselves. The Friars fear nobody, and are too well coached not to be in the running for an upset. And if they pull it off, it’s the upset of the year for perhaps the whole country.

While St. John Bosco is easily still in the running for status as the best team in the country and potential unofficial national champion, last week’s test against Servite showed that they are not immortal. The Braves only won by one point, and at one point the Friars even had a chance to win. Despite at least one touchdown that was incorrectly called back, they aren’t unbeatable.

And JSerra is unquestionably one of the best threats to do it. They’re universally ranked even higher than Servite, and have the confidence to challenge them in addition to the talent. They haven’t been perfect at all times this season, but are very explosive on both sides of the ball. Bosco is the heavy favorite, but it’s far from impossible for the Lions to pull this off. And if they do, they’re officially in the running to shock the world and win some championships this season.