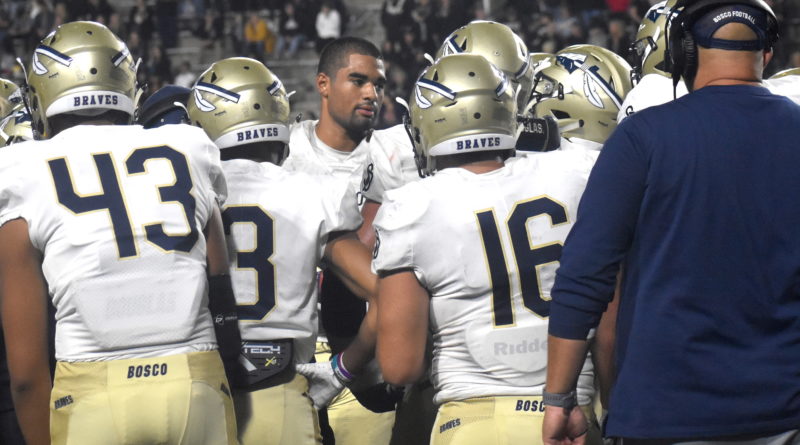 COSTA MESA – In front of a packed crowd at Orange Coast College, St. John Bosco won their first close game of the season against a young Servite team that gave them everything they could handle. The Braves survived their comeback and held on to win, 27-26. Here are five takeaways from their victory.

All the stars stepped up to the plate in this game. For the Braves, DJ Uiagalelei was his usual self, throwing three touchdown passes to Beaux Collins, Jode McDuffie, and Jake Newman on zero interceptions. Nathaniel Jones had a strong night running the ball, which included a rushing touchdown. Jabari Bates and Rayshon Luke were both effective running the ball in limited opportunities as well. Additionally, Bosco’s enormous offensive line was outstanding across the board against an aggressive Servite front seven.

On defense, Bosco wasn’t as perfect as they’ve been for most of the season, but that’s a testament to an outstanding performance by Servite. They still played good defense, led by Newman, DE Nathan Burrell, MLB Danny Lockhart, DT Kobe Pepe, and FS JonJon Vaughns.

Servite was led by their two star sophomores, QB Noah Fifita and WR Tetairoa McMillan. Two of Fifita’s three passing touchdowns were to McMillan, who was pulling in everything and racking up major yardage despite solid pressure by Bosco’s secondary. Fifita also had a touchdown pass to Zedekiah Centers, who had a great game as well. The Friars’ offensive line did well to hold off the Braves’ fearsome front seven and give Fifita room to work.

Defensively, Servite was physical, aggressive, and executed well enough to hold Bosco to their lowest point total of the year. Their interior defense as a unit did enough to put pressure on the Braves’ massive offensive line. Noah Avinger and Karrington Denis anchored a strong effort by the secondary, relative to how unstoppable Bosco’s passing attack is.

“I feel like I got the best offensive line in the country,” Uiagalelei told Scorebook Live after the game.

“I give my hat off to them. They keep me protected all the time and I just love them for that.”

“This is Trinity League football. This is what I expect. It was a good game, a dogfight, we got to play all four quarters. So this is what we expected”

It wasn’t over until it was over. At one point with just a few minutes left, Servite had the ball and was only trailing by a point. St. John Bosco was able to slowly wind out the clock near their end zone without turning over the ball.

REFS IN THE SPOTLIGHT

It’s normal for games to end with one or both sides unhappy with the officiating, but bad calls and disputable calls did take center stage in this game starting late in the first half.

First, a rushing touchdown by Nathaniel Jones was called back due to holding late in the second quarter. Scorebook Live didn’t get a good camera angle of it, but the Bosco side was particularly bewildered and incensed even relative to the significance of the call, and it didn’t appear that Servite expected any flags. Still, nothing conclusive can be drawn from that.

But then, Jode McDuffie was ruled out of bounds on a touchdown pass by Uiagalelei, and we did get a conclusive look at that.

Clearly, McDuffie caught the ball with both feet in the end zone with quite a bit of room to spare — and he only needed to have one foot down. Upon coach Negro’s protesting, St. John Bosco was hit with a penalty for unsportsmanlike conduct.

Additionally, there were a number of weird moments as Bosco was running out the clock in the fourth quarter that both sides found questionable. The Braves were hit with holding penalties countless times that they found baseless. On one instance, the clock stopped erroneously, one referee signaled that he was pausing the action until the clock started running again, and another ref called a delay of game that wasn’t overturned.

On the flip side, there were numerous instances where the Friars side was perplexed at the clock running when it possibly was not supposed to after penalties. If in fact the clock was supposed to stop during some of the penalties when it didn’t, the Friars have a legitimate gripe as well, because those penalties in some ways actually worked to the Braves’ favor. Both sides expressed dismay even when the game was over.

Servite was just one point away from knocking off the second-ranked team in the country. St. John Bosco didn’t play their best game of the season, but they were still very good. And regardless of the touchdown that should’ve counted, Servite was right there with them.

And arguably Servite’s two best players are both sophomores. Noah Fifita can’t see over any defenses at 5’10”, but he was still slinging the pigskin like a future NFL prospect. And Tetairoa McMillan was burning some of the best defensive backs in high school football all night. Noah Avinger is among other top Friars who aren’t going anywhere yet.

Not only is Servite in great shape to compete for a spot in and potentially win games in the Division 1 playoffs, but they figure to be even better in the years to come.