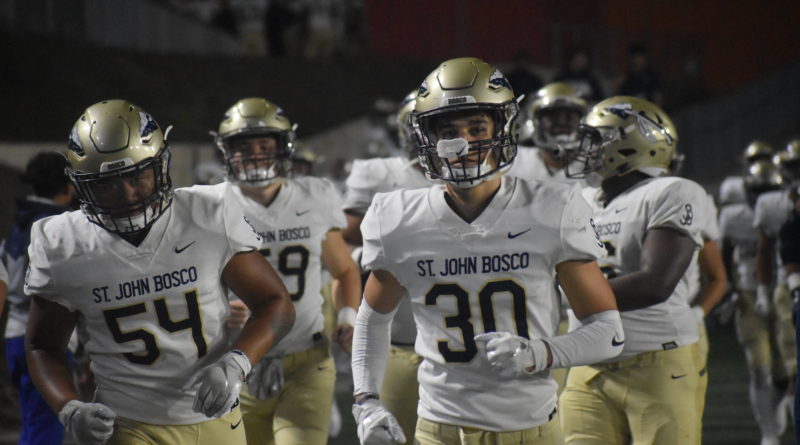 Bryce Young threw four more touchdown passes and Domani Jackson returned an interception for a TD as the No. 1 team in the nation scored 50-plus points for the fourth time this season.

The Braves barely survived their first game against an in-state opponent this season. DJ Uiagalelei was his usual self, throwing three TD passes to Beaux Collins, Jode McDuffie, and Jake Newman. Watch the highlights:

Shamar Garrett scored three touchdowns and the Spartans outscored Monte Vista 21-0 in the second half to win their league opener.

The Diablos posted their second shutout of the season and are allowing just 5.7 points per game.

In the first quarter alone, the Highlanders scored on a blocked punt return, a pick six and a safety.

The Dons will be tested the next two weeks at Madison and at home vs. St. Augustine.

Nick Floyd had seven carries for 170 yards and four touchdowns as the Huskies made quick work of the Sharks.

JSerra scored 28 unanswered points in the second half and Sammy Green rushed for 114 yards and three touchdowns.

QB Mikey Zele was 10-of-15 for 239 yards and three TDs as Grace Brethren opened Camino League play with a victory.

The Gauchos rolled in their Marine League opener as Jack Brown racked up 145 yards of offense and scored four touchdowns.

Byron Cardwell scored five touchdowns and the Saints recorded their third shutout of the season.

CDM beat a good San Clemente team 42-21 on Thursday. The victory gives the Sea Kings a strong chance to go undefeated in the regular season.

Serra’s offensive struggles finally caught up with them as Loyola (3-3) raced out to a 21-0 halftime lead to stun the Cavaliers in their Mission League opener.

Sophomore running back Floyd Chalk rushed for 134 yards and two touchdowns, but it wasn’t enough as Alemany suffered its first loss of the season.

Damien Moore rushed for 172 yards and a touchdown as well as the game-winning two-point conversion to give Amat the victory in both teams’ Mission League openers. Watch the highlights:

The Trailblazers won their fourth straight game and appear to be peaking at the right time.

Central QB Jameson Silva passed for 269 yards and two touchdowns and the Grizzlies’ defense kept Buchanan’s 5-star running back Kendall Milton relatively in check, limiting him to 89 yards. Milton, a Georgia commit, was playing in his first game in a month after suffering a quad injury early in the season.

QB Jaylen Henderson passed for 119 yards and ran for two touchdowns as Chaminade made a statement in its Mission League Opener.

Get used to seeing lopsided scores from the Highlanders over the next month. They won’t be tested again until the playoffs.

Liberty’s defense turned in a dominant performance, holding Antioch to under 100 yards of total offense.

Serra jumped out to a 32-0 halftime lead and cruised to the West Catholic Athletic League victory over San Jose’s Bellarmine.