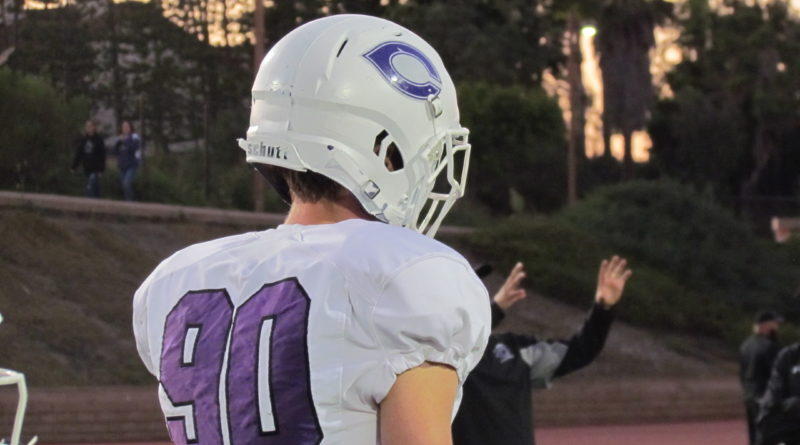 Aidan Sayin went 8-8 and threw for four touchdowns to lead Carlsbad to a 42-7 victory over Torrey Pines in an Avocado League contest Friday night. Carlsbad moved to 5-1 with the win, and Torrey Pines fell to 3-3. Below are five takeaways.

Carlsbad quarterback Aidan Sayin has had a very efficient season and added onto it Friday night with a career performance. The Lancers’ signal caller was 8-8 for 224 yards and 4 touchdowns in the win.

Noah Vella showed his versatility for the Lancers scoring three times on the night. He caught touchdown passes from Sayin of 67 and 54 yards and also ran up the middle for a 53 yard touchdown.

“I think a big emphasis for us was passing. We saw their quarters look and we thought we could throw down the field. We did a much better job blocking and just ran it down their throats,” Vella said.

“I think honestly tonight it just shows what kind of talent we have, and we have to keep rolling with this talent and we can’t come off soft in the week after this,” Vella said.

The Lancers victory gives them sole possession of the Avocado league after Oceanside and La Costa Canyon each picked up their first league losses of the season on Friday night.

As the clock wound down in the 2nd quarter, Carlsbad’s Noah Vella busted through the line and sprinted 53 yards for a touchdown. The Lancers took a 28-7 lead with 1:11 to play before halftime.

I think tonight was the game I’ve seen the least amount of mistakes out of (our offensive line) and I think it really showed. We have a great group and we really came together as one,” Vella said about the big guys up front.

The Falcons wing-t offense was not equipped to play from behind, completing only one pass on the night.

Torrey Pines entered the contest having won three straight against Carlsbad, each by a touchdown, including last season’s 35-28 overtime win on the road.

“This definitely was a revenge game for us, you know last year coming off that heartbreaking overtime loss and we knew we could compete with them this year, we just had to give that extra push,” Vella said.

After fumbling a handoff on their opening drive, Carlsbad’s offense moved the ball at will on their way to 42 unanswered points.

“We knew we could put it on them, we just had to execute. I made a silly mistake the first drive, that was on me, but then we put it back together,” Sayin said. “The line dominated, receivers got open and it’s pretty easy to get them the ball.”

Sayin and backup quarter Jack Geraghty combined to go 11 for 11 and thrown 5 touchdown passes on the night, with limited pressure in the back field throughout the game.

“Those are my family; I love my brothers. I take a lot of pride blocking for them, I’m gonna keep blocking for them until I leave this school,” senior offensive lineman Johnathan Harrison said after the game.