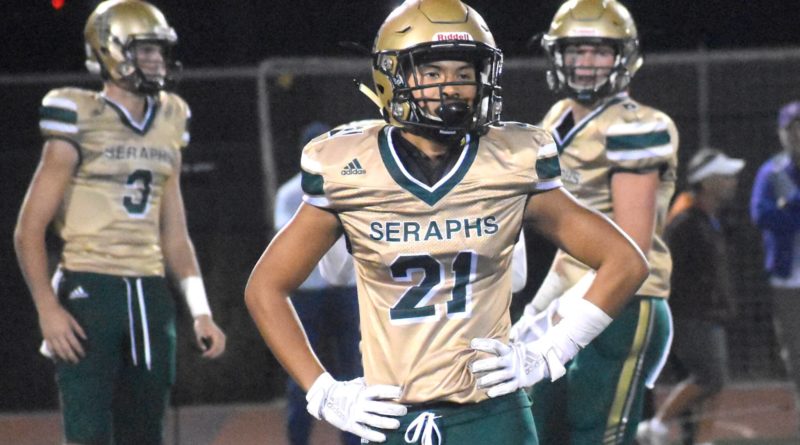 Newbury Park had a noticeable size advantage on both sides, but the Seraphs didn’t let that get in the way. They used their speed advantage whenever possible, and were a little sharper in their execution.

Both of St. Bonaventure lines did excellent jobs against bigger foes. Defensively, their front seven was too quick at the edge, and their secondary had no problem rotating inward on a dime when Newbury Park ran the ball or opted for short screen passes.

Offensively they weren’t always able to entirely hold off Newbury Park’s large defensive line, but their offensive linemen blocked very strategically, and their playmakers were already in action by the time the Panthers started breaking through. Their run game itself was too fast for Newbury Park to handle.

St. Bonaventure sophomore James Arellanes is having a breakout year at running back, and this was likely his best game yet. He ran for four touchdowns, and in the neighborhood of 150 yards. His acceleration was impressive, and he was already finding seams at top speed by the time Newbury Park had a grip of him.

Wyoming-commit Gavin Beerup was dominant as well. A lot of times, his offensive line was able to buy him ample time to load up, and he was making crisp passes that were on the money. At 6-5, he was the tallest player in the game, and his ability to see over the defense and make good reads was on full display. His running ability was also on display, as he picked up yardage on a number of keepers, and scrambled to keep numerous broken plays alive.

He only finished with one touchdown, a dart to Ryeon Morales in the first half, but did a lot of heavy lifting.

The Seraphs’ defense was a little disorganized to start the game, allowing a touchdown on the first drive of the game. After that, they were impeccable, and Newbury Park hardly came close to scoring again. The effort was all-around. Morales, Joseph Young, Noah Conn, and Brayden Winchester were among those leading the charge.

Newbury Park QB Ben Gulbranson did what he could, and remained poised even when the Seraphs’ defense was proving to be too much. Christian Middleton and Dane Germann both did great work in the Panthers’ secondary despite the loss.

There was never exactly a point when the game was blown wide open. All of the Seraphs’ touchdowns were the results of lengthy drives that Newbury Park often nearly put ends to. Almost every drive had one or two key conversions on a third down. So the game never really felt out too far out of reach.

Early in the fourth quarter, Arellanes delivered his third rushing touchdown of the night to make it 28-7. The comeback would’ve needed to start immediately for Newbury Park right then, and they couldn’t make it happen.

After the game, Arellanes talked to Scorebook Live about the Seraphs’ offensive success. He cited their ability to both run and pass the ball equally well.

On playing with Beerup, he said, “We have a pretty good friendship. He throws the ball faster than usual. He’s tall. He’s a D-1 quarterback. He rarely messes up.”

He was also quick to give credit to the offensive line.

“They’re just fast off the line. They’re not the biggest, but they’re really physical.”

While Beerup is the bona fide top name in St. Bonaventure football program, Arellanes is quickly putting himself on the map as a player to watch. Last season, he made the varsity squad as a freshman, and was productive in the couple games he played in as well. This season, he’s been a force at running back all year.

Coming into this game, he’d run for 329 yards and two touchdowns while playing next to a D-1 pro-style quarterback and splitting reps with another outstanding running back in Justin Cantu. On Thursday night, he tallied career highs in touchdowns (easily), and probably yardage too. With his burst, he’s just getting started.