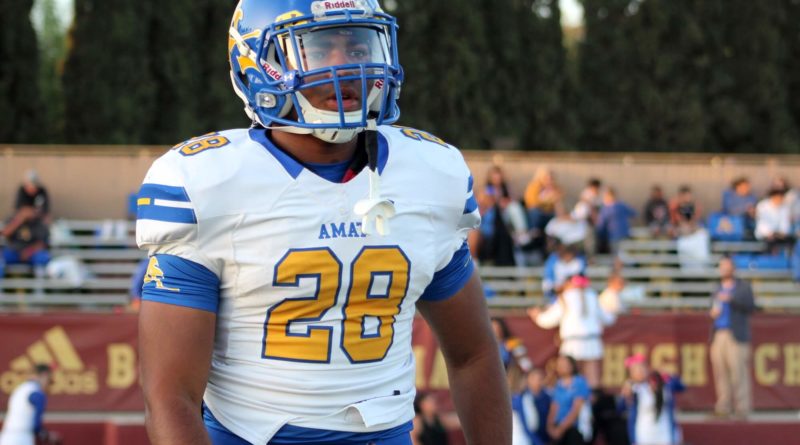 MISSION HILLS — Damien Moore rushed for 172 yards and a touchdown as well as the game-winning two-point conversion to push Bishop Amat to a 25-24 victory over Bishop Alemany in both teams’ Mission League openers Friday night. Amat moved to 5-1 with the win, and Alemany fell to 5-1. Below are five takeaways.

Amat head coach Steve Hagerty said that Moore earned “every one” of his 172 yards on the ground. The Cal commit appeared to be stopped on the Lancers’ two point try with under a minute to go in the fourth, but he kept his legs churning and got into the endzone. The senior also rushed for a 13-yard TD in the third quarter.

On the Alemany side, sophomore running back Floyd Chalk rushed for 134 yards and two touchdowns in the loss.

Hagerty addressed his team’s slow start to the season compared to where they’re at now after tonight’s win. Amat had trouble in wins over Diamond Ranch and Paramount to start the year. The Lancers’ head coach explained the difference between then and now postgame.

On fourth and four from the Bishop Amat 12, Alemany elected to go for it instead of attempting a game-winning field goal. Warrior quarterback Miller Moss handed the ball off to Chalk who was stopped short of the line to gain by a group of Lancer defenders, which included Moore. That gave Bishop Amat the ball and the Lancers took a knee on the next play to end the game.

Only one Mission League game has been played by each team so far, but Amat got arguably the toughest one out of the way and walked away with a win. Tonight’s results (Chaminade beat Notre Dame and Loyola beat Serra) show that every league game will be a dog fight. Those were two upsets. Wins will be tough to come by and Amat picked up a really tough one tonight. This may be a very important head-to-head victory down the line.

Hagerty wasn’t happy with his team’s multitude of false start penalties and Alemany coach Casey Clausen was constantly asking the referees for explanations on calls against his Warrior team Friday. This wasn’t the prettiest game.