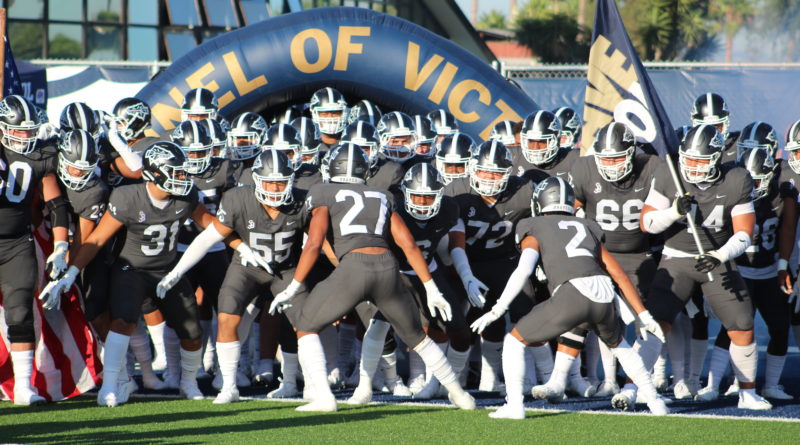 League play is finally starting for most Southern Section football teams, which means there are several intriguing matchups on the schedule this week. Here are 10 Southern Section and LA City Section games to watch:

The Baseline League has two clusters. Rancho Cucamonga and Upland are heavily favored to be the distinct top two. Then Chino Hills, Los Osos, Etiwanda, and Damien are all around the same tier behind them, but not so far back that they can’t compete.

Chino Hills will be looking to pull off the upset, and also simply separate themselves from the rest of the pack, and at least not finish at the bottom of it. If they do win, they have a chance at their first league title since 2015. Rancho Cucamonga stunned Upland last year to win the league title against heavy odds. They can potentially win it again this year, but they’ll have to be perfect.

The Cubs know they are considered to be at the bottom of the Mission League, and they don’t let it stop them from playing with a lot of energy. They’ve already seen some excellent competition this season, such as St. Augustine, and will bring everything they’ve got every game. With the Division 4 playoffs to look forward to, any win in league would be huge, and narrow losses will help them a lot more than blowouts.

Serra has a strong case to make as the most talented team in the Mission League, and may prove to be the best. They do, however, play down to inferior competition–they beat Calabasas and almost beat Narbonne, but nearly lost to Long Beach Poly and Cathedral. They’ll need momentum on their side to get through Bishop Amat, Alemany, and Notre Dame. Coming out flat against Loyola is the last thing they need.

Speaking of feisty teams going against schools called Junipero Serra, Santa Margarita is very feisty, and excellent defensively. They’re going to struggle to win any games in arguably the best league in the country, but they play with pride, and playing against Trinity League teams is nothing new to them. As a result, they’re going to always keep themselves in the mix to pull off upsets. A couple fumbles or pick-sixes, and JSerra’s dreams of shocking Mater Dei and St. John Bosco for a league title could be over.

If nothing else, this should be a fun matchup to follow because of the polar differences in preseasons these two teams have had. The way Foothill has played this season, it’s hard to believe they’re down in Division 9. They’re 5-0, mostly with victories over teams that are not on their level, except for one huge win over Yorba Linda.

Meanwhile, Villa Park has had one of the most bizarre preseason schedules you’ll see. They’ve lost badly to Mater Dei (!), Mission Viejo, and Servite – easily three of the top 100 teams in the country – and victories over Trabuco Hills and El Toro that weren’t close. They haven’t faced one team that’s anywhere in their vicinity. Foothill will be the first team they’ve faced that’s evenly matched. Not only should it make for an exciting game, but also it’ll be curious to see how they roll in after vastly different starts to the year.

Mater Dei is coming off what was arguably their most difficult win of the year against St. John’s (Washington D.C.). OLu will be hard-pressed to make a game out of this. That said, after getting demolished by Narbonne two games ago, they showed a ton of resilience to come right back with a big 42-17 win over Vista Murrieta. It will be intriguing to see if they can keep that fire burning against Mater Dei, whether or not it’s competitive.

Murrieta Valley and Vista Murrieta are pretty much deadlocked as favorites to win the underrated Southwestern League. But try telling that to 5-0 Chaparral, who has blown out every opponent they’ve faced this season.

That said, Murrieta Valley is 5-0 in their own right, including a shocking 39-38 win against Oaks Christian. On Thursday, one of these teams will go from undefeated to barely in contention for a league title. The Nighthawks are easily the favorites, but if Chaparral wins, they’re immediately in the driver’s seat to challenge for a league title.

Coming into this season, it did not seem likely that Wilson was going to present a legitimate threat to Long Beach Poly to win the Moore League, but that’s exactly what’s happening. The Bruins have started the season 6-0 with nothing but double-digit wins. And their schedule has been solid, with wins including Mayfair and Huntington Beach.

Long Beach Poly is very young and only off to a 2-3 start. Realistically, nobody in the league has much of a chance besides Wilson. That said, Wilson is also playing at a level that probably can’t be matched by anyone else in the league. That means whoever wins this game is very likely to win league. If Wilson pulls off the upset, which is unlikely but easily possible, that would be one of the biggest stories in Southern Section football all year.

After making short work of one of the top 50 teams in the country in Mililani (Hawaii), the Braves look as formidable as ever. Outside of Mater Dei, Servite has about as good of a chance as anyone they’ll face this season to compete with them. The Friars’ defense’ held Notre Dame (Sherman Oaks), the arguable Mission League favorites, to just two scores in last week’s narrow victory.

Is St. John Bosco still favored to win by a significant margin? Absolutely. But Servite is one of the last teams anyone can sleep on. They will battle all game long and capitalize on every mistake. A couple mistakes and an off night offensively for Bosco is all Servite needs to have a shot.

Rivals San Clemente and Tesoro both have legitimate aspirations to win the South Coast League. To do it, they’ll have to go through each other, and then Mission Viejo. Other than Corona del Mar beating San Clemente last week, they are both unbeaten as well.

Whoever wins this game will almost definitely win out until it’s time for Mission Viejo in the last two weeks of the season. That means that whoever loses this game is very likely knocked out of title contention. It’s just the beginning of league play, but everything is on the line in this one.

The Mission League regular season is starting off with a bang between its most explosive offense and one of its best defenses. Amat and Alemany are both in the mix to win the league, and this game could potentially end up as the determining factor.

Alemany won all five of their preseason games in blowouts. Their best game was a shocking 44-7 rout of Oaks Christian the week after Oaks beat Sierra Canyon. That game proved that their defense is legit, and the Warriors’ offense was never in question. Miller Moss already has 1,332 passing yards on the season.

As for Bishop Amat, their first three victories were all less convincing than expected, but they did finish the preseason 4-1. Additionally, their only loss was to JSerra, and their last win against Cathedral was their best. Their highly touted defense will be up against possibly its biggest test of league play on Friday.

If Narbonne were to ever lose a City Section game these days, it would be an upset of epic proportions. That said, they are starting league play off against 5-0 San Pedro, arguably the next best team in the City Section and the clear biggest threat in the Marine League.