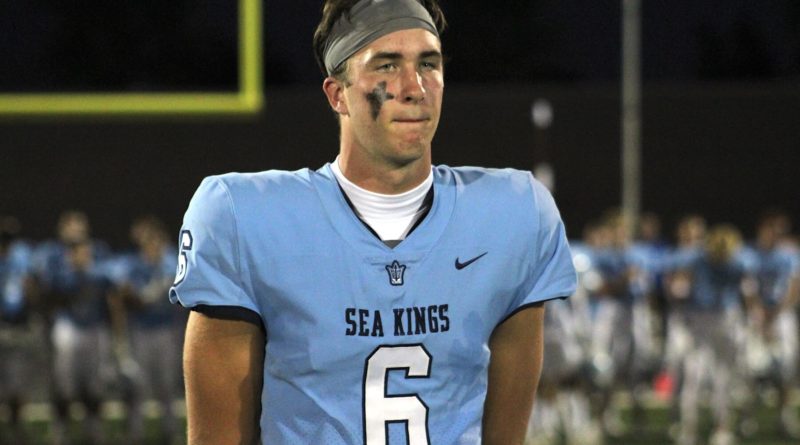 A few days after committing to Alabama, Bryce Young gave Crimson Tide fans a glimpse of his immense talent, completing 26-of-37 passes for 416 yards and 5 TDs in a 53-24 win over St. John’s (Washington DC) Friday. What will Young do against Orange Lutheran?

The Braves were on the bye ahead of the start of Trinity League play.

The Spartans ran away from St. Mary’s in the second half, winning 55-17. Now they face their final regular season road game of the season at Monte Vista.

One of the best defenses in the state had another dominant performance in a 38-3 win over Upland on Friday.

Elelyon Noa rushed for 276 yards and 4 TDs in Helix’s 42-17 win over Oaks Christian. There isn’t a better running back in Southern California.

QB DJ Ralph threw two TD passes and ran for another and Zavien Watson added a pair of TD runs as the Dons rolled 63-0 over Otay Ranch on Friday.

The Lions had the week off before the start of Trinity League play.

Alonso Person — a sack, an interception and a fumble recovery TD — spearheaded a dominant defensive effort by the Gauchos in their 28-0 win over Lawndale.

QB Jake Reithmeier threw two TD passes and rushed for two — all in the first half — as the Bulldogs cruised past Menlo-Atherton 49-0.

The Saints were off last week following their 44-38 defeat to #5 Helix.

CDM beat a good San Clemente team 42-21 on Thursday. The victory gives the Sea Kings a strong chance to go undefeated in the regular season.

Serra drops a spot in the rankings after a 13-7 win over Cathedral. Chad Johnson Jr. torched the Cavaliers for eight catches and 132 yards.

Alemany has had two weeks to prepare for Damien Moore and #16 Bishop Amat.

Bishop Amat has had two weeks to prepare for undefeated #16 Alemany.

QB Chayden Perry threw for 192 yards and two TDs as the Trailblazers won their third consecutive game 31-10 over Bakersfield Friday.

QB Jameson Silva and the Grizzlies spent the bye week preparing for Buchanan.

Sean Guyton had a terrific all-around game for Notre Dame, but the Knights suffered their first loss of the season, falling 16-13 to #14 Servite.

The Highlanders won’t lose a game the rest of the way with Freeway League play starting Friday.

Upland had a tough time against #4 Mission Viejo on Friday falling 38-3. They’ll look to take their anger out on Baseline League teams beginning Friday with Damien.

The Lions’ lone remaining test will come against Pittsburg on Oct. 18.

QB Daylin McLemore had three rushing TDs in Serra’s win over Riordan. The Padres will keep the Baxter Trophy for another year.