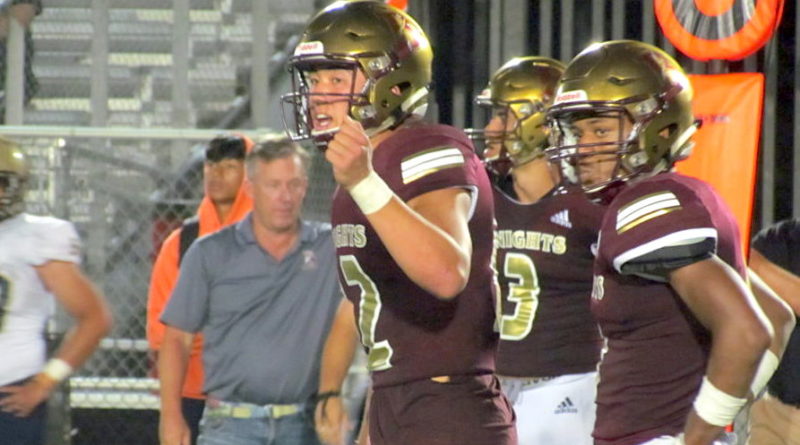 Madison taking down #6 Grossmont isn’t a huge shocker, but the Warhawks went into Grossmont and left no doubt as they scored 28 second-half points to grab a 34-13 win over the previously unbeaten Foothillers. Madison was able to limit the Jaime Odom’s high-powered passing attack to 122 yards, though Odom did run for 132 yards. Madison continued their trend of alternating wins and losses to begin the season but must look for consistency now as they’ll see Lincoln, Cathedral Catholic, and St. Augustine over the next 4 weeks in Western League play.

Lincoln survived a scare on Friday night when they traveled to Mater Dei Catholic to play a Crusaders team that was on the wrong end of some record-setting performances early in the season. Lincoln trailed 23-14 at halftime but battled back for a 31-28 win. Mater Dei Catholic, who allowed 59 points and 71 points in consecutive weeks to Grossmont and Bishop’s has battled back to allow only 23 points per game over their last 3 games with their offense averaging 47 points per game over that span. Lincoln will begin Western League play next week and must clean up several things if they want to keep their hopes alive of being an Open Division team.

The Bishop’s School put up another offensive clinic on Friday as they took down Francis Parker, 53-13. The Knights are now averaging 51 points per game through 5 games on the season. Notre Dame commit Tyler Buchner was 13-of-18 for 338 yards and 4 touchdowns and also added 92 yards and 2 touchdowns on the ground. His receivers Clarence Freeman and Clay Petry combined for 10 catches, 269 yards and 3 touchdowns.

While many North County teams had a bye in week 6, Oceanside made the trek south to Olympian. Junior quarterback Jakob Harris was 15/23 for 253 yards and threw 3 touchdowns in the Pirates 33-3 victory. Junior receiver Nicholas Williams made a name for himself catching 4 passes for 99 yards including all 3 touchdowns from Harris.

San Marcos had their defense up to the challenge of stopping Mt. Carmel on Friday night. Marley Arnaldo led the Knights with 7 tackles, Noah Cline led with 3 sacks, and Jake Bolin and Gavin Cherveny each had interceptions as San Marcos shutout Mt. Carmel, 35-0.

Senior Steven Cristini did a little bit of everything for West Hills on Friday night. He had 54 rushing yards, 23 receiving yards, 75 kick return yards, 23 punt return yards, and returned an interception 100 yards for a touchdown in the Wolf Pack’s 24-14 victory over El Capitan.

Hilltop’s Terran Pineda played a large role in the Lancers 28-21 victory over Bonita Vista on Friday night. The senior linebacker racked up 7 tackles, 5 TFL, 3 sacks, a forced fumble, and a fumble recovery to help the Lancers move to 5-1 heading into senior night against Mountain Empire next week.

HOW I VOTED THIS WEEK

Francis Parker grad Ryan Sanborn punted 3 times for Stanford in their win over Oregon State. He averaged 50.3 yards per punt with a long of 68 yards and had two of them downed inside the 20-yard line.