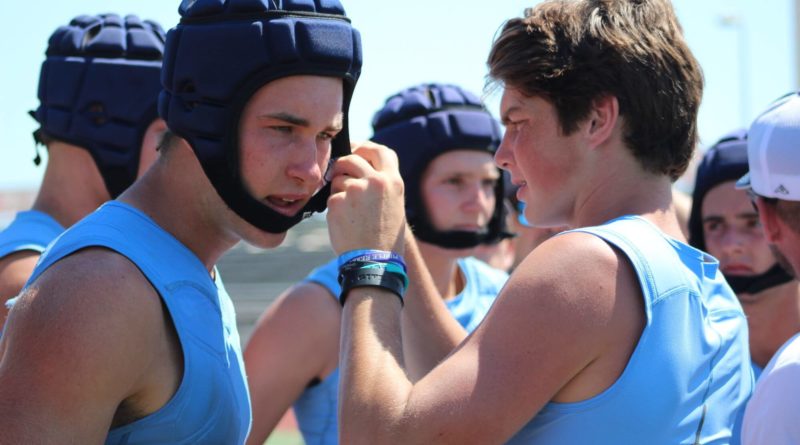 The votes are in! We have superlative winners in eight categories from high school football programs all across Southern California.

Okay, there was no voting. This is just me giving out the honors. But either way, check out the list below!

These two are not only good buddies, they also make up one of the most lethal quarterback-receiver combinations in the country. Garbers is committed to Washington and Humphreys to Stanford. They teamed up for three scores in last week’s 42-21 win over San Clemente.

Tons of players have unique cleats or distinctive sweat band combinations. Turner-Gooden’s “Crenshaw” visor separated the sophomore from the rest of the field in the swagger department. The defensive back has an awesome look.

MOST LIKELY TO SUCCEED

I hate projections. It’s not my style and it never will be. Who really knows which high schoolers will excel at the college level?

Please allow me to be a hypocrite for a minute. Every once in a while there is someone so gifted, it’s impossible to not project. Upland linebacker Justin Flowe falls into that category. The senior released his top four colleges at the beginning of the season. One of Clemson, Georgia, Miami or Oregon will be getting a certified NFL prospect.

MOST LIKELY TO BRIGHTEN SOMEONE’S DAY

In Notre Dame’s first game of the season, junior quarterback Cooper Meek tore his meniscus. He’ll miss the remainder of the season. The injury couldn’t have happened to a nicer kid.

A few weeks ago when Notre Dame hosted Paraclete, I checked in with Meek. With a smile on his face he explained exactly what happened to him on the play he got hurt and why he’ll miss so much time.

Win or lose, every interaction I’ve had with Meek has been pleasant. He’s a well-spoken individual with a bright future. He’s the type of quarterback you want to rally around and I’m sure he frequently brightens his teammates’ days like he has brightened mine.

MOST LIKELY TO STAR IN A MOVIE

There are a lot of wannabe actors and actresses in this neck of the woods. Loyola defensive back Ceyair Wright doesn’t fall into that category; he’s an actual actor. In addition to being a top football recruit, Wright will play LeBron James’ son in Space Jam 2. Pretty soon, we’ll be hearing Wright’s name announced at the Oscar’s.

MOST LIKELY TO WIN AN OLYMPIC MEDAL

So far in his high school career, Luke has lived up to his nickname of “Speedy”. Last year as a freshman, Luke ran a personal best 10.55 in the 100m dash. That was one of the top times in the state.

As Luke gets older, look for his times to improve. Eventually he may have to choose between football and track & field.

East leads the City Section in receptions with 34. No other receiver has crossed the 30-catch mark in the section so far this year. East is to Narbonne QB Jake Garcia what Julian Edelman is to Tom Brady. Whenever Garcia is in a pinch, he looks East’s way.

Last season Hobert won MVP of the Seaview League because he did a little bit of everything for San Juan Hills. The Washington State commit caught 46 passes for 643 yards and nine touchdowns. He also intercepted four passes as a defensive back. Hobert played special teams too. He punted, kicked and returned punts and kicks for the Stallions. He returned two punts for touchdowns and brought back one kick for a score.

Hobert is as versatile as ever in his senior season. He’s already caught eight TDs and picked off a pass.

Now let’s get into the weekly breakdown…

Elsinore kicker Michael Sandoval booted a game-winning field goal as time expired to beat Banning 44-42 Friday night. On a weekend, without too many close games, this Southern vs. City Section battle was great theater.

Narbonne linebacker Jordan Banks had an impressive strip sack in the Gauchos’ 28-0 win over Lawndale on Friday.

Carson is 0-6 and has lost its starting quarterback to a season-ending ankle injury. This post serves as a great reminder to players on losing teams the importance of competing on every play. You never know who is watching.

How about some love for an offensive lineman?