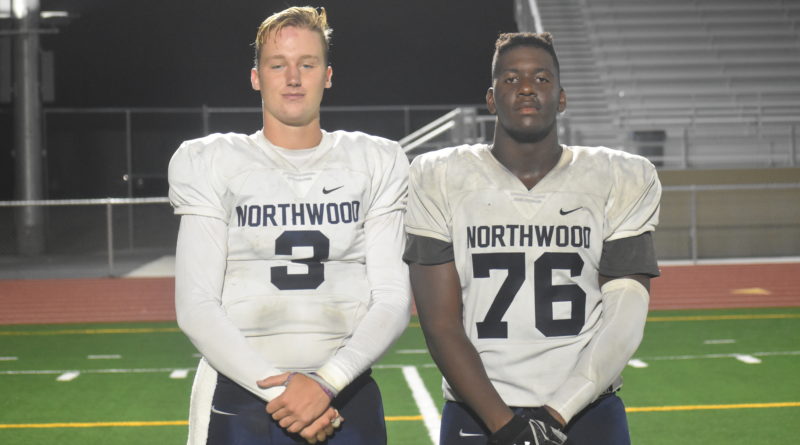 IRVINE – At a school of 2,237 students in the hotbed of high school football talent that is Orange County, the Northwood Timberwolves varsity squad fields only 40 players.

There is no junior varsity team, and the frosh/soph team has a total of 45 players. In the initial preseason counts for the two teams both had fewer than 40 players. So, everybody has to be able to play both sides of the ball.

It’s not uncommon for high school teams to have a number of players start on both ends, even at the largest Division 1 programs. It’s not always a sign of necessity, as many players have the skill, athleticism, and conditioning needed to dominate on both sides of the ball. Plenty of good high school programs have no shortage of depth, but still choose to start numerous players on both ends.

The Timberwolves don’t let it hold them back. Instead, they use it to their advantage.

Northwood is a program on the rise. After a few down years, the Timberwolves went 8-4 and made the playoffs last season. They even beat Rancho Alamitos to make it to the quarterfinals to cap off their most successful season since 2005.

This year, Northwood is hoping to win its first-ever Pacific Coast League title and advance further in the playoffs. Many of the best players were significant contributors on one of the best teams in school history last year.

Northwood is off to a 4-1 start in 2019, with wins over Saddleback Valley Christian, Troy, Bolsa Grande and Cerritos. Their first three victories were shutouts. In their 54-0 win over SVC, they held the Warriors to only 80 yards of offense. Bolsa Grande never came near the end zone. Northwood’s one loss came in double-overtime to a Dana Hills team that’s off to a 6-0 start.

Last year as a junior, Xavier Cousar won the Northwood Player of the Year award as voted on by Northwood coaches. He starts at left tackle on offense, where he was first team All-Division last season, and switches between nose guard and defensive tackle on defense. Last season, he finished with 110 tackles, including 13 for loss and seven sacks.

At 6-foot-2 and 265 pounds, he’s receiving plenty of D-1 interest, and has recently been invited to play in a Blue-Grey All-American Bowl. So how does Cousar play both ways without wearing down?

“It’s mostly just how hard you go during practice,” said Cousar. “If you can go hard in practice both ways at 100 percent, that sets you up for the game. And we have more conditioning after practice as well. But if you go 100 percent during practice and always practice going both ways, that helps you simulate how hard it is to do it during games.”

When he’s not practicing or doing team conditioning, Cousar is in the gym lifting and playing basketball. He says everyone pushing themselves even further in training outside of the extensive team activities is a common practice within the program, even during the season. The players often eat together before splitting off into their own individual workouts once team practices and workouts are over.

“Everyone on this team this year, we have such a great chemistry,” said Cousar. “We all know each other very well, we’re hanging with each other 90 percent of the day. Being on both sides of the ball with each other helps build that sense of trusting each other to all do our jobs. ‘Let me do my job, I’ll let my guy do his job – let’s make this work.’”

In the 2018 quarterfinals, Northwood lost to Laguna Beach 34-13. Despite the 21-point margin, the Timberwolves saw it as a winnable game. They made some mistakes late in the game and it spiraled out of control towards the end.

“Last year we had issues with discipline, and that set us back,” said Cousar. “Moving towards the playoffs, this year, we’re very disciplined. We have that attitude that this is not just about me, this is about the whole team. This year we’re going to hold everyone accountable. We like to use the term, ‘all in.'”

“And if anybody doesn’t understand that idea, we bring them into it and make sure they see that we are trying to make a championship run this year.”

A starting quarterback playing minutes on defense is rare. Let alone starting on the defensive line.

Jaden Piazza has only been playing quarterback for four years, but won the starting job a few weeks into last season as a junior transfer. Defensive end has always been his primary position, and he also played some offensive line when he was younger.

He only played quarterback in 2018, but once the last game of the season was out of reach, the coach let him sub in at defensive end. Sure enough he was effective and it brought up his passion for playing that part of the game.

This year he’s taking on the challenge of starting at both positions. In Northwood’s season-opener, he threw for 203 yards and four touchdowns. Against Bolsa Grande, he had another four-touchdown performance.

How does Piazza balance the two positions?

“Coach (Paige Nobles) always keeps us highly conditioned because he knows we always have to be at 100 percent throughout every quarter of a game,” said Piazza. “And he always is careful with keeping me healthy and safe to play on the offensive side. Coach works us just to the right amount to where we’re going to have enough energy for game day.”

“But also, I find my energy for it because it’s fun to do both sides. I love playing quarterback, but I also really love playing D-end. They’re each a different kind of rush that I get while playing the game … it’s just kind of an energy you get from loving the game.”

Like Cousar, Piazza almost never takes a snap off on either side unless he’s forced to by the coaching staff.

“I love it. It’s just amazing,” said Piazza. “You get to see both sides of the ball, and have a different mindset for each one. As a QB, you get that defensive mindset.”

“It’s a good mix. I like playing physical,” said Arena. “At receiver, I have to play more elegantly. You have to be smooth and fast. And at D-end, you have to be tough.”

Mindset and preparation are keys to success for Arena at both a team and individual level.

“We’re really tight as a group. We’re pretty much a unit. We play as a unit, we work as a unit – on the field and off the field. When we’re out there on the field, we have each other’s backs. Not a lot of teams are that connected. The grind never stops.”

Trey Littlejohn started on offense, defense, and special teams last season as a sophomore. He was only 5-foot-9 and 120 pounds coming off his freshman year. Knowing that he’d have a shot to make a leap into the varsity rotation, he hit the weight room and put on more than 25 pounds of muscle the following offseason. Now he’s in his second year playing receiver and corner, and he’s the kicker to boot (pun not intended).

“I just love defense,” said Littlejohn. “It’s so fun to be able to guard a guy, and have the whole team look at you and say, ‘oh he stopped him.’ That’s like the best feeling to me. But then on the other side scoring touchdowns, well, that’s probably even.”

Littlejohn grew up playing soccer, and also started at shortstop last season on the varsity baseball team. He did not start playing football until high school. Yet within a year, he was one of the best players on the varsity football team in all three phases of the game.

Littlejohn likes to be in constant motion, and he thinks his team’s lack of depth is an advantage.

“The advantage of making it work is that you’re always warm,” said Littlejohn. “If you’re ever on a team where you have a really good offense or a really good defense, but the other one is suspect, both teams will be scoring a lot and half your team won’t be on the field a lot. But if you go straight from defense to offense, your legs are always warm.”

He also understands a lot more about route-running as a corner by playing receiver. And as a receiver, he understands more about getting the coverage off balance and getting open because he plays corner. The footwork and technique at both positions cross over.

Littlejohn wants to play college ball no matter what the opportunity looks like. Baseball or football – he would welcome either. Out of everything he does, kicker may be his best bet to get him to the next level. Because he’s a multi-sport athlete and defensive back, his athleticism and tackling ability could give him a leg up (again, pun not intended) trying to make a college team as a kicker.

Against Bolsa Grande, Littlejohn caught four touchdown passes. Multiple times, he burned his defender so badly that he was stationary waiting to catch a touchdown pass.

Northwood isn’t the only school to have 40 or fewer players on a varsity team. Nor are Cousar, Piazza, Arena and Littlejohn the only elite core of two-way starters in high school football. But Northwood is in the upper echelon of teams that fit that bill, and the best is yet to come.

‘THIS IS MY CAREER’

The Northwood players are all very excited to have new head coach Paige Nobles at the reins. Nobles came in last year as a special teams, running backs and defensive line coach. He was named head coach in January, and already has a full grip on the players and the culture, and alongside him is a group of leaders on and off the court that has bought in.

When the coaches addressed the team after beating Bolsa Grande 40-0, the message was clear: this was good, but we can be better.

“I think we know that we can be pretty good this year,” one of the assistant coaches told the team. “But the question is, are we going to push ourselves to be great?”

It’s 10 p.m. on a Thursday night, and coach Nobles is back to his office for an intensive film study that he wants to have done by early the next day.

He has to prepare for not only varsity practice, but practice for the frosh/soph team where he’s the coach as well, as are a number of his varsity assistant coaches. He estimates that he will get two hours of sleep.

Like his players, he doesn’t take a snap off.

“Now that the game is over, everyone is going back home to their families and everything. That would be nice,” said Nobles. “But this isn’t just a job for me, or something I do just because I enjoy it. This is my career.”

Time will tell how far Northwood can climb as a football program. Next year’s freshmen class has some talent, and projects to have close to 30 players. If that materializes, coach Nobles is hopeful they can go back to fielding a full JV team.

However this season finishes, this group of players will leave a legacy of competitive drive, work ethic and unity. And while Cousar and Piazza head a strong senior class that will be gone next year, Arena and Littlejohn are among plenty of impact players who will be back.

Even with more depth, a few things won’t change about the Timberwolves. They will still strive to create an unbreakable bond, on and off the field.

“Not only are we closer, but being closer makes us better,” said Littlejohn. “Because if you like the guy next to you, it’s easier to trust him.”