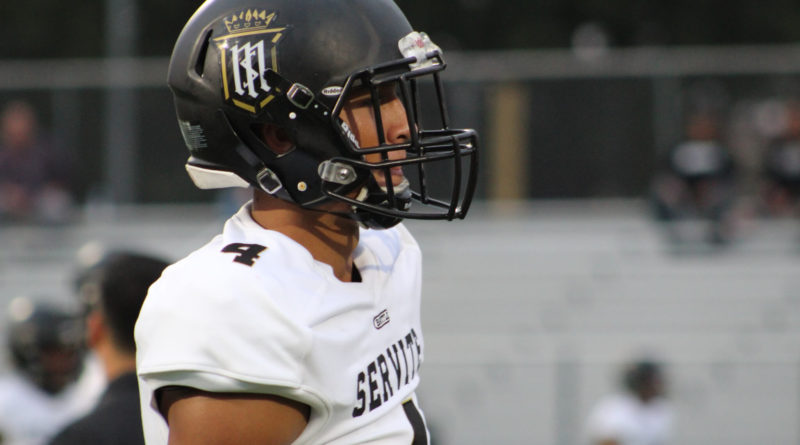 Graham finished with three total sacks and was Servite’s standout defensive player in the win.

On the offensive side, sophomore wide receiver Tetairoa McMillan consistently extended drives for the Friars with key third down receptions. He caught a 38-yard pass from Noah Fifita at the end of the first half to set up to set up the Friar’s game-winning score. A two-yard Kyle Bandy TD plunge finished that drive off to make the score 16-13. Those were the last points put up in the game.

For Notre Dame, Sean Guyton intercepted Fifita in the end zone late in the fourth quarter, which gave Notre Dame a chance to tie or take the lead at the end of the game. He also made plays on offense. Guyton had a key fourth down reception in the first half.

“To beat Kevin Rooney, a legendary coach and to beat them at their place, that’s a big deal for our program as we try and rebuild this thing,” Servite head coach Troy Thomas said after the game.

This is an important win for Servite for a few reasons. First, Thomas’ super sophomore class gained a lot of valuable experience that will help them as the year goes on. People knew Fifita and McMillan before this game, but Graham’s breakout performance showed that he’s ready for this stage too.

The win is also big for playoff seeding down the line. Notre Dame has a shot to win the Mission League. A head-to-head win for Servite over ND puts the Friars in the drivers’ seat for a D1 playoff berth.

Finally, Servite goes up against St. John Bosco and Mater Dei in their next two games. They’ll go in as big-time underdogs in both of those contests, but at least the Friars will go in on a high. This win gives Servite something to hang their hat on heading into these two tough games. It’s a nice boost of confidence.

IT WAS OVER WHEN …

… facing 4th down and long from midfield, Siskowic completed a pass well short of the line to gain and the Knights turned the ball over on downs with eight seconds left on the clock. Servite took a knee on the next play and that was that.

Don’t question Siskowic’s toughness. The sophomore QB entered tonight’s game a little banged up and twice had to sit out for a play after taking big hits from Servite defenders. Both times he returned to the field as soon as he could. Siskowic ran for a touchdown and didn’t turn the ball over Friday. He managed the game well.

After the postgame handshake line, Servite coach Troy Thomas pulled Siskowic aside separately to commend his effort. It was that kind of performance.

In addition to Graham, the Friars play three other sophomores on defense. Maxx Silao, Houston Thomas, and Jacob Manu all contributed to the Friars’ second half shutout Friday night. Add that to Fifita and McMillan’s connection on offense, and that’s six sophomores who punch way above their weight class. It’s a special group.