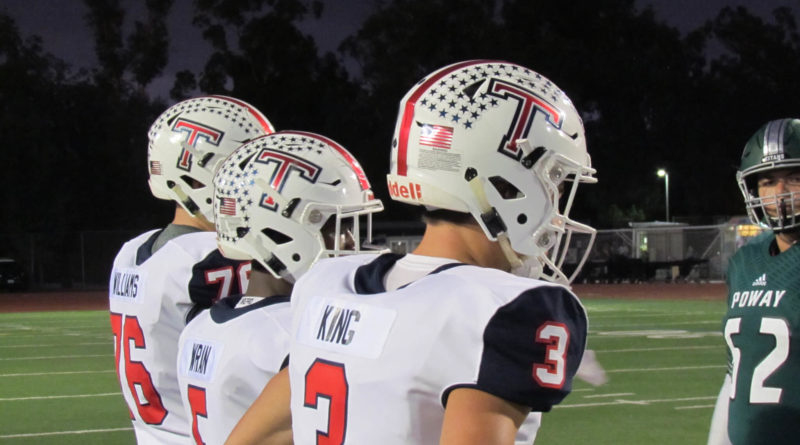 Tesoro dominated its San Diego Section football matchup with Poway Friday night, running away with a 44-3 victory. Here are five takeaways from the game:

Zach Wren: Had touchdown runs of 55 yards, 6 yards, and 2 yards and also caught a 21-yard screen pass for a touchdown.

Sean Lindgren: Threw two touchdown passes and led the Titans up and down the field all game.

Caeden King: Caught a perfect pass from Lindgren down the visiting sidelines for a 41-yard touchdown reception and a 24-3 Tesoro lead.

On the first play of the 2nd quarter, Tesoro had the ball in the red zone and appeared to fumble which was jumped on by Poway. The referees blew it dead and ruled that it was an incomplete pass.

The Poway coaching staff was very unpleased with the call and were issued a personal foul as a result of their complaints. Tesoro responded with a 2-yard touchdown run by Zach Wran to grab a 17-3 lead and never let up again.

“We came off the high of a rivalry game and next week is San Clemente, so we really wanted to make sure that we were focused on this game, especially with our head coach being out,” Lindgren said. “Stay focused and take it one week at a time.”

Tesoro is now 6-0 and will begin South Coast League play next week.

Tesoro forced Poway into four 3-and-outs in the first half and only allowed them across midfield once.

“Defense balled out. That’s a great offense over there, to only allow three points. Our defense is doing great, it makes my job a lot easier,” Lindgren said.

Running back Zach Wren agreed, “Field position is big. When we’re close to the end zone, it’s just easier to score for us. Defense put us in great position every time.”

Tesoro has been without head coach Matt Poston as he underwent open-heart surgery last week.

“We have a hashtag right now on twitter, #WinForPoston, you know he means everything to us. We wish he was out here, and we know he’s gonna be out here soon. We saw him at practice on Wednesday and it’s really good to see him, he’s doing well,” Lindgren said postgame.

Poston returned home earlier this week to continue his recovery. “Coach Poston expects perfection from us and without him here we’re still gonna give it to him,” Running back Zach Wren added.