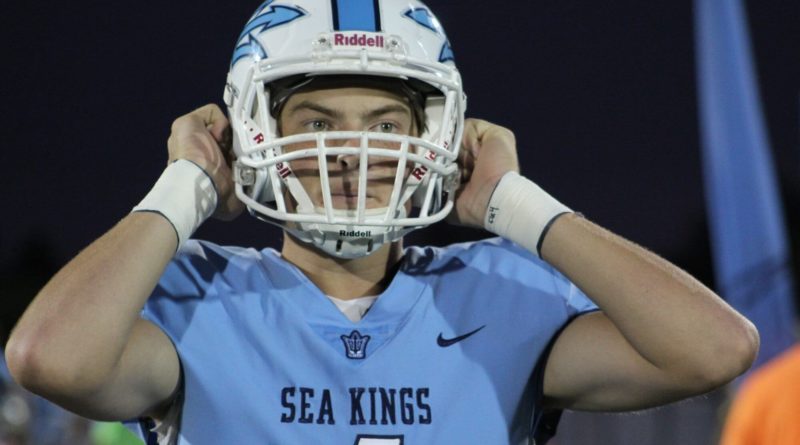 Garbers and Humphreys looked like the Pac-12 prospects that they are in this one. On three separate occasions, Washington-bound Garbers threw short passes to Stanford-bound Humphries that resulted in two-yard, four-yard and five-yard touchdowns. San Clemente knew it was coming, but couldn’t stop it.

By the end of the night, Garbers had completed 30 of 39 passes for 378 yards and the four scores. Humphries caught five more passes in addition to his three touchdowns to finish with 122 receiving yards.

Tight end Mark Redman and wide receiver Bradley Schlom also turned in strong performances. Redman made three catches on three targets during CDM’s first drive. He finished with seven total grabs. Schlom caught a 49-yard touchdown from Garbers that made the score 21-7 with 4:14 to play in the second quarter. He ended with nine catches for 153 yards.

Junior linebacker Kevin Ledezma, blocked a San Clemente punt and picked it up in the end zone to put Corona del Mar up 35-14 in the third quarter. He stood out on defense as well.

On the Tritons’ side, quarterback Nick Billoups didn’t start under center for San Clemente but came in for the Tritons’ third series and led his team to two straight touchdown drives. He was the main reason San Clemente only trailed 21-14 at the break. The senior made plays on defense too. Billoups intercepted Garbers in the end zone on the last play of the first half to secure the one-score halftime deficit. He had a night to remember on an evening San Clemente will hope to forget.

“We haven’t even played our best football yet,” Corona del Mar head coach Dan O’Shea told his team after the victory.

That’s what’s so scary. San Clemente is a Division 1 team and a good one at that. Division 3 Corona del Mar was the best team from start to finish Thursday night, despite having over 100 yards in penalties.

The depth and offensive execution is what separates the Sea Kings from other top teams in the area. On their first touchdown drive, Redman had three catches, Schlom had one and Humphreys made the TD grab.

On their second scoring drive, Simon Hall caught a four yard pass on 4th and three from the San Clemente 27. Playmakers can be found up and down the roster.

Corona del Mar scored four touchdowns on their first five drives and should have walked away with at least a field goal on the one drive they came up empty (Garbers threw the end zone interception). It will take a dominant defense to take them down, which leads me to my next point…

THERE CAN ONLY BE ONE

It’s impossible to not look ahead to the Division 3 playoffs. Corona del Mar will be one of the top seeds along with Bishop Alemany and Grace Brethren. None of these teams have even come close to losing a game yet. There is no favorite or front runner; that’s how good these three have been. It might take a little luck to win D3 this year…

THE GAME WAS OVER WHEN

Ledezma’s punt block and recovery in the end zone put the game away. That score put Corona del Mar up 35-14 with 7:04 to play in the 3rd.

WILL CDM RUN THE TABLE?

Where’s the loss? CDM plays on the road against Huntington Beach and Newport Harbor and hosts Edison, Fountain Valley and Los Alamitos the rest of the way.

The toughest game will be Edison, but San Clemente beat Edison. 10-0 not only could happen for the Sea Kings, it should.